Adapted by Jeffrey Hatcher from the original by Nikolai Gogol 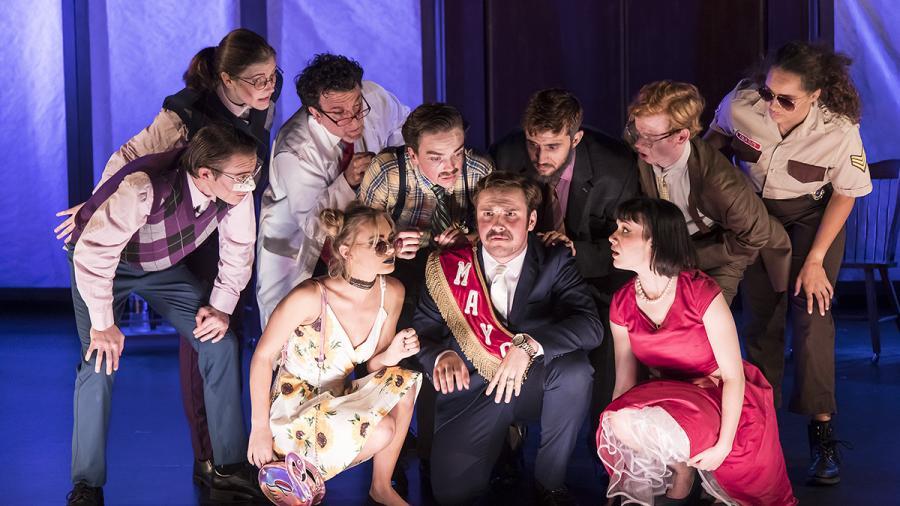 When the locals in a small Russian hamlet learn that an undercover government inspector is coming for a surprise visit, a case of mistaken identity sends the whole village spiraling into a world of panic and greed.  One part farce, one part slapstick, with a dash of musical theatre - this frothy and wildly satirical adaptation exposes bureaucratic corruption with biting hilarity. General admission $15, Students and Seniors $10.

Everyman's life is at an end, and though Death has given them time to prepare for their reckoning, it may strike at any second. What would you call upon to walk with you into judgment?

A kaleidoscopic play exploring contemporary issues about knowledge, technology and communication, and our capacity for love.  Mature content. General Admission $15, Students and Seniors $10.

Musical Direction by Michael Shasberger and Staged by John Blondell

The Music and Theatre Departments conspire to join forces in what has quickly become a Westmont tradition – The Spring Opera.  Actually, this year it is TWO Spring operas – a delightful double bill of Giaochino Rossini’s Cambiale di Matrimonio and Giacomo Puccini’s Gianni Schicchi.  Love and Marriage meet Wills and Contracts when we pair these marvelous short operas by two of Italy’s most famous composers.  Oh, and there’s at least one dead body. What a romp! General Admission $20, Students and Seniors $15. All ticket purchases through The New Vic Theater.

Written and Directed by Lyndall Stephenson ‘20

Our Season to Bloom

Written and Directed by Abigail Pryor ‘20

April 16-19 at the Westmont Fringe Festival (more info to come!)

A new musical that glimpses into the lives of four interconnected people throughout a season of change. A story about dreams and our relationships with one another. Starring Ben Thomas ’20.

Effective March 20, 2020, performances for Fringe Festival have been cancelled due to restrictions related to Covid-19.

April 16-19 everywhere on Westmont campus and at CAW downtown

Daily and All Festival passes available Tickets here! Times to be determined.

www.westmont.edu/boxoffice for tickets and information