Learning in a Time of Politics: Liberal Arts Education and Political Engagement 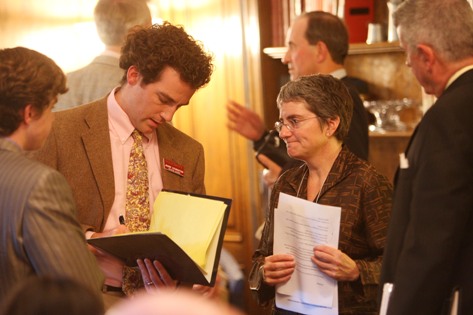 There is nothing new or surprising about this political climate. But it does present a serious challenge to a central goal of a liberal arts education: to help students become engaged and thoughtful participants in our political life. Some students turn off, regarding the political realm as a swamp of self-interest masquerading as public good. Others engage passionately, but at times simplistically, carving the political landscape into realms of good and evil, and failing to bring their critical skills to the claims of friend and foe alike.

The task of "Learning in a Time of Politics" was to learn from each other how best to help students become critical, informed, and engaged participants in our shared political life. We considered classroom strategies and extra curricular programs as well as broader questions of campus climate and how academic institutions are themselves political agents.

Harvard historian of education Julie Reuben served as catalyst for our conversations. Professor Reuben has done outstanding work in the relationship between educational institutions and American political life. Her contributions offered us concrete examples of efforts to educate for citizenship: what has motivated those efforts, what assumptions and values have undergirded them, and what their results have been. In addition to the three plenary sessions led by Professor Reuben, we also enjoyed ample opportunity for discussions on campus-wide programs and classroom strategies that foster fruitful political engagement. 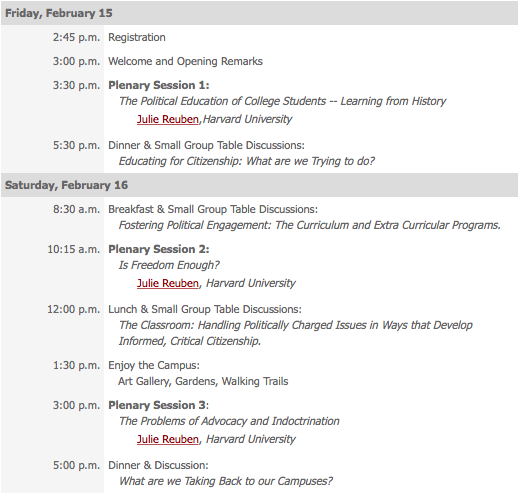 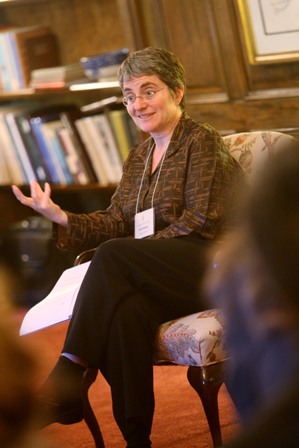 Julie Reuben is a historian interested in the role of education in American society and culture. Her teaching and research address broad questions about the purposes of education, the relation between educational institutions and political and social concerns, and the forces that shape educational change. She is the author of TheMaking of the Modern University: Intellectual Transformation and the Marginalization of Morality. This prize winning book examines the relation between changing conceptions of knowledge, standards of scholarship, and the position of religion and morality in the American university during the late 19th and early 20th centuries. In addition, she has written a number of articles related to campus activism, access to higher education, curriculum changes, and citizenship education in the public schools.

Reuben is a Professor at the Harvard Graduate School of Education. She has been selected as a Fellow for the Center for Advanced Study in the Behavioral Sciences and received a Major Grant from the Spencer Foundation. She received her B.A. in history from Brandeis University, and her M.A. and Ph.D. in history from Stanford University.

The following are recordings of lectures given by Harvard historian of education, Julie Reuben at the Eighth Annual Conversation on the Liberal Arts. These lectures address the topic "Learning in a Time of Politics: Liberal Arts Education and Political Engagement."