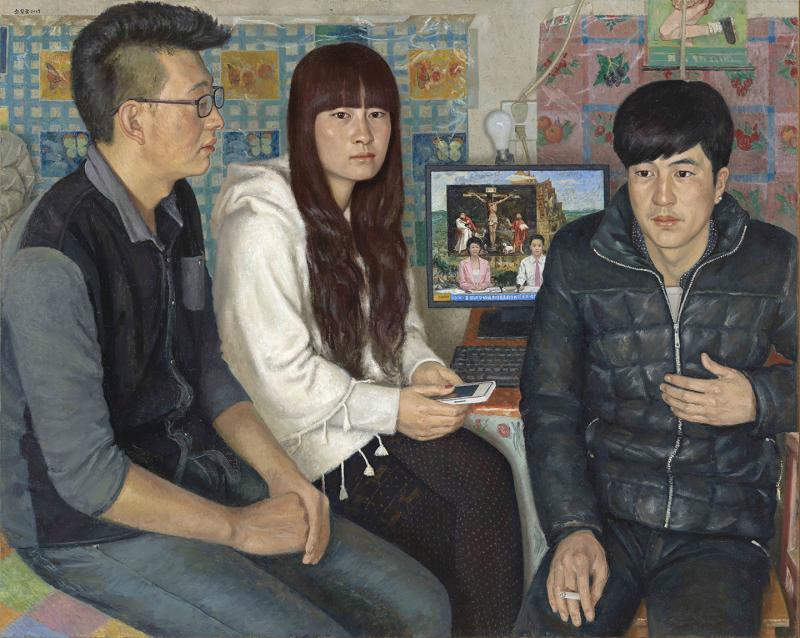 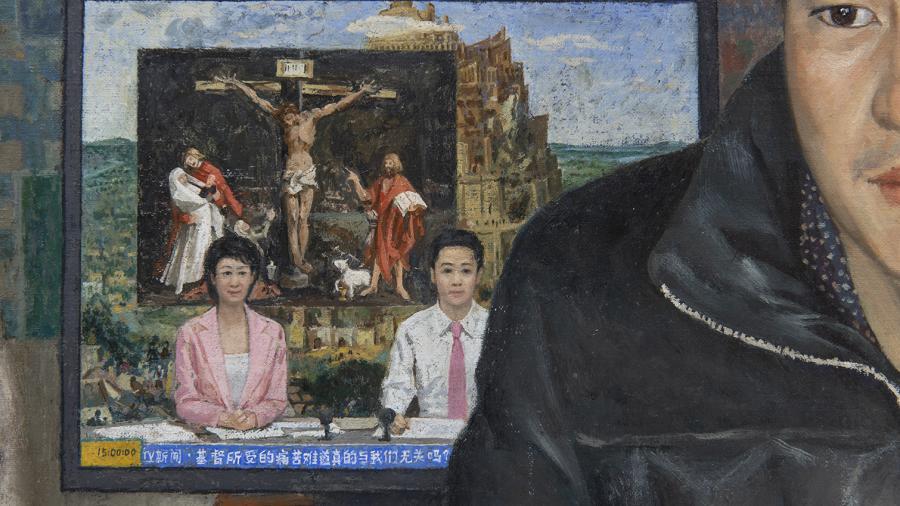 News. This is in a ranger’s home in a poverty-stricken area in northwestern China. During the Chinese Spring Festival holiday, family members return from all over China to their hometowns to celebrate the festival together. The two figures to the middle and the right are sister and brother. They both quit school long before and became migrant workers at some ordinary jobs. To the left is their neighbor, a university student studying in the city. This band can almost represent all the young people in rural China: away from their hometown either for university study or for jobs. By any means, they have to leave their homes behind to go to the cities so that they may have a chance in life, however slim that chance might be.

While I was sketching, I chatted with them the story of the gospel. Immediately they appeared indifferent, as if it were something that had nothing to do with them, something a million miles away. So I fabricated a series of images on the computer in the painting. I made up a news broadcast by CCTV (the state news-broadcasting station of the Chinese government) titled “Does Christ’s Suffering Really Have Nothing to Do With Us?” On the news-broadcasting screen I appropriated Pieter Bruegel the Elder’s Babel and Matthias Grünewald’s Crucifixion.
—Ziyun Tong 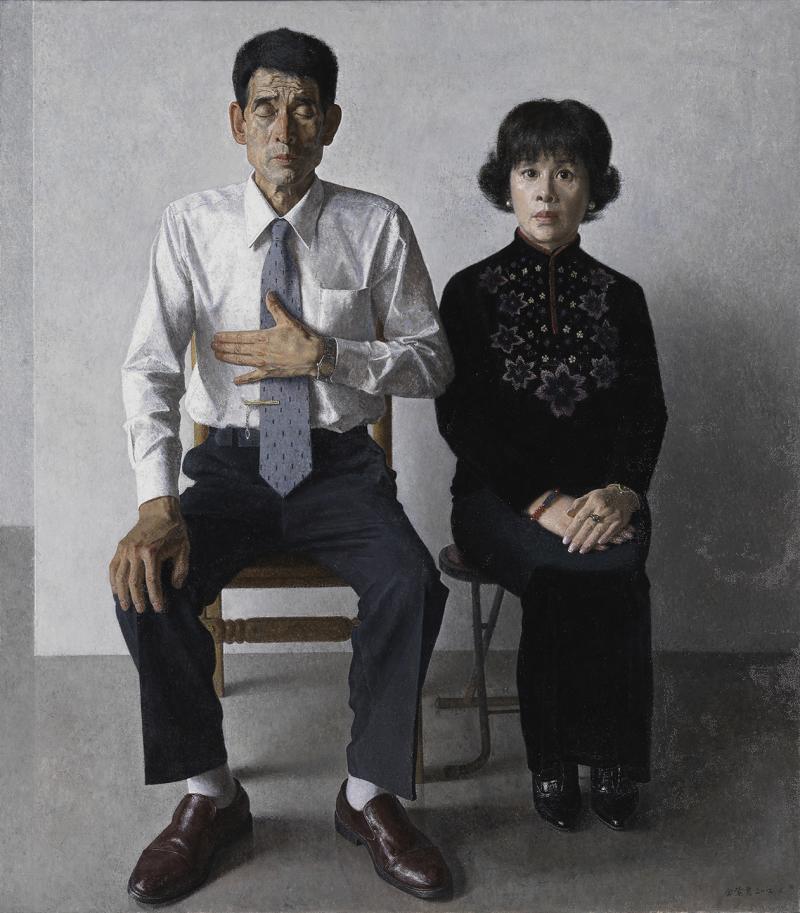 Questioning. These are two Beijing natives. They are not a married couple, but ordinary retired elderly people. They earn some extra income by modeling in different art studios. They have experienced dramatic changes in China and both have his or her own story.

This gentleman used to be a worker. After being laid off from a state-owned enterprise, he drove a taxi for eight years. The night shifts have worn him out physically. He is waiting for the demolition of his house by the government because that way he can get a large sum of money as well as more housing as compensation. He likes to gamble. His wife divorced him. I saw pain and powerlessness in him. In fact, he has late-term lung cancer and has quit treatment because he is unable to pay the expensive bills. But he hid all this and tried to put on a happy face. It was not until two to three years later when he died that we learned about his cancer. A group of Christians were very kind to him. He converted but he did not believe in heaven and hell.

This lady just heard the gospel but is still in doubt at the moment. She has remained single all her life. A descendent of the royal Qing aristocracy Ba Qi, she has always lived a delicate life. She was in the clothing business in the past. After retirement, she felt bored and decided to become a model. She does not drive but she owns a car. So she hired a driver, but her income as a model is not even enough to pay the wages of the driver.

Both people are experiencing sufferings and doubts in life. Every one of us has his or her own doubt and pain in life.
—Ziyun Tong

There is an old Chinese proverb, sometimes attributed to Laozi, the founder of Daoism: “Calamity has its roots in prosperity, prosperity has its roots in calamity.” Since the opening of China under Deng Xiaoping following the disastrous decade of the Cultural Revolution that effectively decimated not just the cultural heritage and economy but relational trust itself, the Chinese people were given a remarkable level of discretion in the way they lived their personal lives, freedom to travel, all manner of “opportunity,” and an economic system that would provide them with greater material wealth and comforts. Increasingly, people of different generations and stations in Chinese society are struggling with the same human malady, what is known as the jingshen kongxu, the “spiritual void.” These paintings by Ziyun Tong and his descriptions of them convey a condition shared by countless people in China and around the world who find themselves adrift in a material world.

About the Artist
Ziyun Tong is a professional painter. Born in Tanghe, Henan Province, China in 1987, he graduated from the oil painting department of China Academy of Fine Arts with a bachelor's degree in 2010 and a master's degree in 2013. Tong became a researcher at the Chinese Academy of Oil Painting in the Chinese National Academy of Arts in 2011, and has been teaching in the research and advanced study division in the Academy since 2014. His work has been selected for numerous major exhibitions in China and included in newspapers and magazines such as Fine Art, Artists' Newsletter, Art Newspaper, etc. He published Viewing the World with a Clear Mind: Collection of Artworks by the Research Group at the Chinese Academy of Oil Painting.