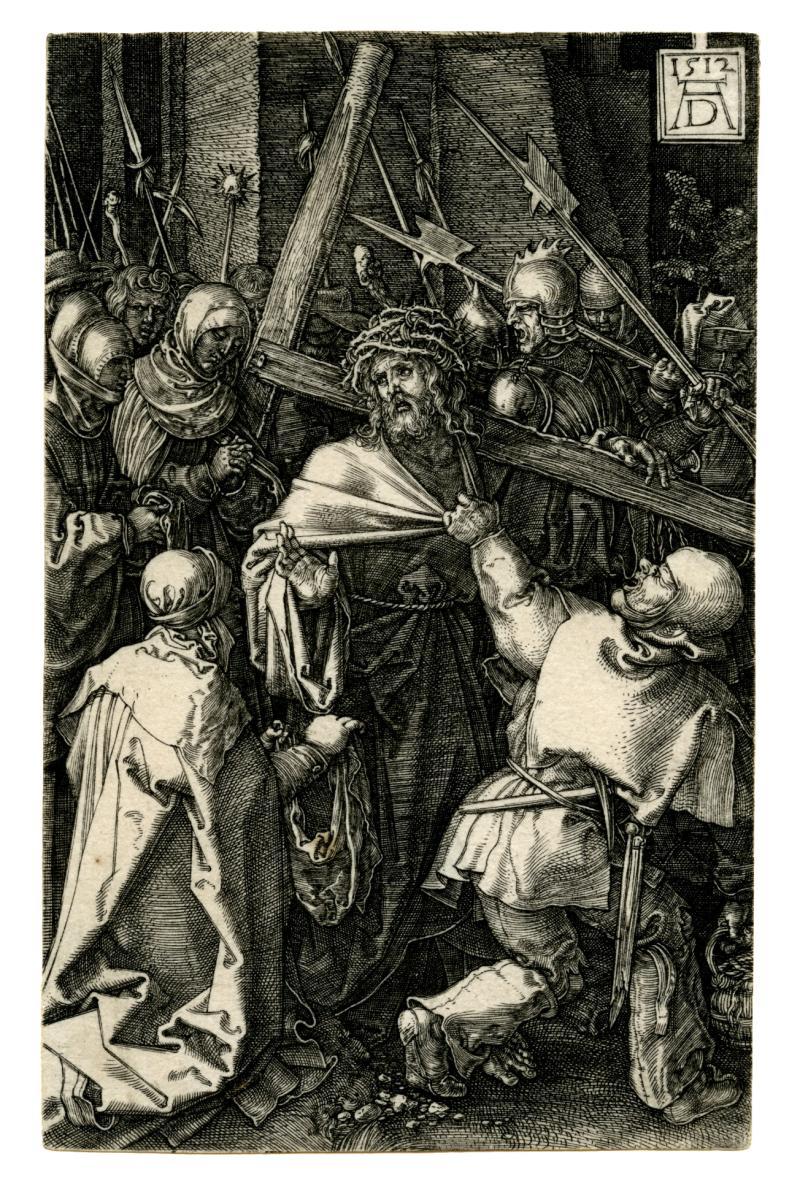 Albrecht Dürer was a Renaissance artist, who revolutionized printmaking and developed it into a respected art form. Born in Nuremberg, Germany, Dürer began working under the tutelage of his father, a goldsmith, at a young age. He showed natural talent and became the apprentice of Michael Wolgemut (German, 1434-1519), learning painting, woodcarving and furthering his skills with the burin tool in etching. By his mid-twenties, his work gained popularity, resulting in commissions from famed patrons and respect from his contemporaries. Through his introduction of classical motifs into German art, Dürer is considered one of the great artists of the Northern Renaissance.

During Dürer’s career, he created many famous print series, one of the most popular being his three Passion Series: The Large, The Small, and The Engraved. Each depicted the story of Christ’s physical and spiritual suffering at the end of his life. The Small Passion and Large Passion series were both stunningly detailed woodcut prints that were mass-produced for the public. The woodcut process did not allow Dürer to achieve his desired detail, which is why he explored other printing techniques. The Engraved Passion, unlike the Small Passion and Large Passion, was engraved into a copperplate allowing Dürer to portray far more detail. Vasari credited the Engraved Passion as, “the ultimate in perfection and quality attainable in the medium as regards beauty, variety of vestments, and composition.”*

Christ Carrying the Cross is one of the sixteen prints in the engraved series, created between 1507 and 1513. The engraving depicts the events of the Passion that are recorded in John 19:16-17: So the soldiers took charge of Jesus. Carrying his own cross, he went out to the place of the Skull (which in Aramaic is called Golgotha).** After being sentenced to death by Pontius Pilate, Jesus was beaten and tortured. He was forced to carry his cross to the place he would be crucified. Saint Veronica is seen kneeling to the left of Jesus holding a cloth. Although there is no mention of the venerated Saint Veronica in the Gospels, it is said that she offered her veil to Jesus when moved by sympathy for him. He took the veil and pressed it to his face, leaving the imprint of his appearance. This cloth is known as The Veil of Veronica and is one of the most treasured relics of the church, rumored to be held at the Vatican. Other followers of Jesus are depicted behind Saint Veronica with mournful expressions as belligerent soldiers taunt them. Dürer’s trademark monogram signature can be seen in the upper right-hand corner with the date 1512.

Dürer died in 1528 in Nuremberg, Germany. 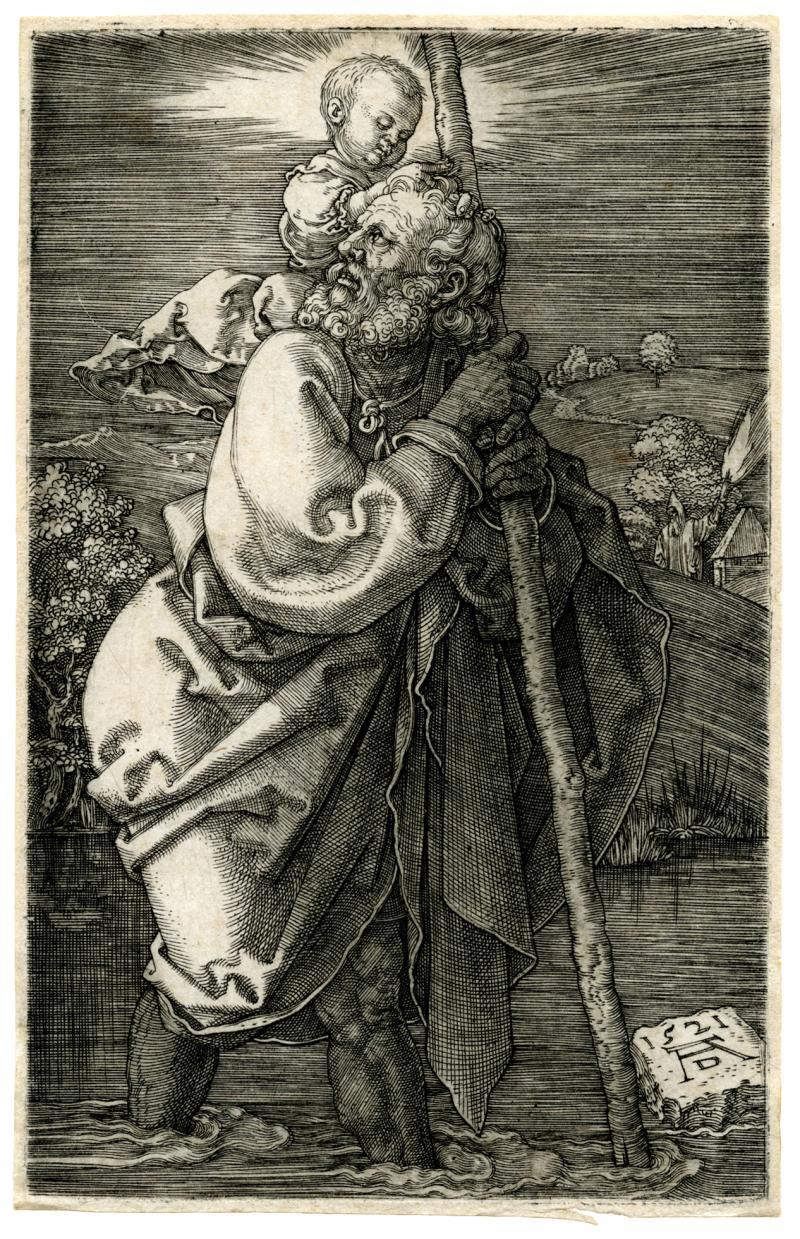 Born in Nuremberg, Germany in 1571, Albrecht Dürer began his career by training under his father as a goldsmith, but after honing his skills with the burin tool, he instead pursued a career in fine arts. He apprenticed under Michael Wolgemut (German, 1434-1519), a famed Gothic period artist, where he learned to paint, to do woodcarving, and to make copper engravings. After his apprenticeship, he opened a workshop and had his first success as an artist with the publication of The Apocalypse (1498), a series of fifteen woodcut prints depicting various scenes from the Book of Revelation. As his prints circulated throughout Europe, his fame spread quickly, and he gained recognition with both art patrons and his contemporaries.

Engraved by Dürer in 1521, Saint Christopher Facing Left depicts the Christian saint of transportation and travelers who was martyred in 251. It is said that Christopher was a giant, towering over most men. His legend begins when he decides to find and serve the strongest leader. He pledges his allegiance to a powerful king, but leaves him after discovering the king’s fear of the Devil. Christopher surmises that the Devil must be the strongest leader, so he finds the Devil, and learns of his fear of the cross. Saint Christopher leaves to serve the Christian God and meets a Christian hermit who suggests, since he is so large, that Christopher could serve God by helping people cross a treacherous river. Saint Christopher spends years at this river helping people cross, and one day a child asks for his help. He picks the child up and begins to wade through the river. Soon, the child becomes unbearably heavy, making it almost impossible for Christopher to continue. He eventually makes it across safely, and when he asks why the child was so heavy, he learns he was carrying the Christ Child who had the weight of the world on his shoulders. After revealing himself to Saint Christopher, the child vanishes, and the Saint leaves the river to share the message of Christ. He is often depicted as a large man with a child on his back and a staff in his hand.