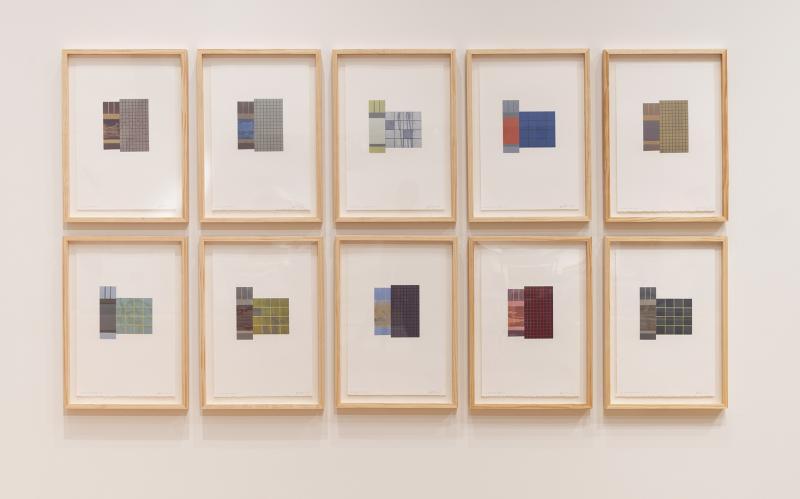 Pine Waves / Cloud Ravines is a series of monotyped relief prints that pair a severe grid with the structure of a Chinese scroll painting. The title and structure are borrowed from a painting by the Qing landscape painter Wang Hui that I viewed in Shanghai. Prior to Matter + Spirit I felt as though I had traveled quite a bit with a “better than average” grasp of global art history. The trip reframed this knowledge drastically, reminding me daily of the vastness of Chinese art and history.

What I was most surprised by was the intricate geometry in evidence everywhere—the temple floor plans, the intricate lattice work screens, even the proportions of the rectangles within a scroll painting. I was stunned by the constant back and forth between circles and squares, heaven and earth—resoundingly clear in the design of the Prayer Hall for Good Harvests in the Temple of Heaven complex in Beijing. The paradox I found was that even as this geometry felt only one step removed from the order of an Italian Renaissance church design it still remained distinctly separate. This difference is hard to articulate but perhaps it is tied to the former’s relationship to nature. The rigid designs somehow feel organic. Using western points of reference, I recall feeling that the designs were embracing both Minimalism and the Baroque simultaneously, without apparent effort.

The nature of a reduction print is that at each step, for each color, the block is slowly carved away. As the printing matrix disappears, the fragility of the image is heightened. Each decision made about color, transparency, weight, etc. becomes irreversible. With the carved elements eliminated, it is impossible to return to an earlier decision and rework or reprint it.

The grid itself is heavily imbedded in Western Art History; whether it be Renaissance perspective (Alberti), the flatness of modernist painting (Greenberg), or the severe austerity of Minimalism (Lewitt). This familiar structure is intentionally paired with the equally rigid Eastern geometry of a Chinese scroll, but with a vast and alternate symbolism. When joined together these two forms inherently create tension (reflective of larger cultural tensions) but also generate new symmetries and parallels as a new holistic unit. This synthesizing of the forms invents a new dialogue in the space in which they meet. Chance moments of atmospheric water marks draw our attention to the contrasting flat areas of pure color, a point of dissonance as they simultaneously reveal underlying patterns of sameness. I believe this unexpected revelation of sameness is what the experience did most for me. 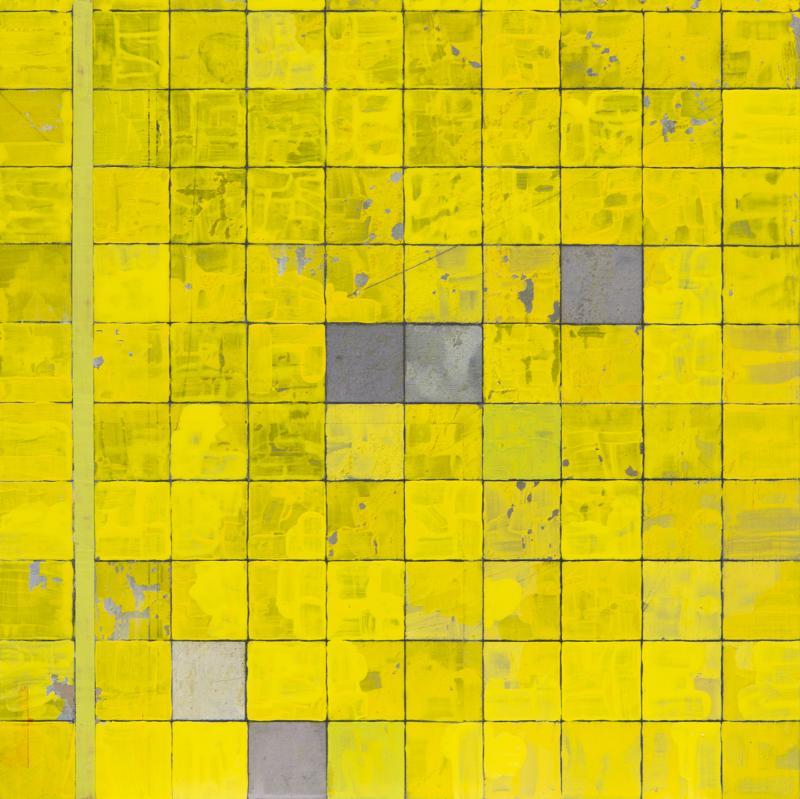 The painting Untitled (Nanjing) is an investigation of the grid and the overlapping range of hues and values found in gold. The act of building up the colors, scraping them off, only to repaint them again is meant to be a meditative act. The surface reveals the history of process, with each new color building on the one laid down before. While visiting Nanjing, I was heavily impacted by the visit to the Nanjing Massacre Memorial Hall and Museum, as I was made painfully aware of my own prior ignorance of the historic event. The visit was sobering, and caused each of us to meditate on history and violence. This painting serves as a token of that moment, a reminder of the complexity of knowledge and history.
—Brenton Good

Nanjing, with its tree-lined boulevards and pleasant shopping district by the river, seemed refreshingly calm and livable after the congestion and intensity of Beijing. Yet its history is one of great upheavals and tragedies: the Taiping Rebellion (1850-1864), causing millions of casualties; the Revolution of 1911, which marked the end of the Qing emperors and the start of a republic led by Dr. Sun Yat-sen; and the massacre committed by Japanese invaders in 1937, which caused 300,000 deaths. Our visit with perhaps the greatest impact was to the Memorial Hall of the Victims in the Nanjing Massacre, a massive campus filled with sculpture, and an unrelentingly horrific place. It was important for the Americans to see this memorial and to understand something thereby of today’s Chinese nationalism. “Never again,” the memorial seems to proclaim, will the Chinese be brutalized and humiliated by foreigners.
—Joel Carpenter, Nagel Institute

About the Artist
Brenton Good is a painter and printmaker living in Camp Hill, Pennsylvania. He is Associate Professor of Art at Messiah College where he is also Chair of the Department of Art and Design. Good received his M.A. and M.F.A. in printmaking from the University of Dallas in 2005. His artwork has been exhibited internationally and appears in a variety of permanent collections. Also a writer, Good’s essays on art have appeared in publications such as the journal Image and numerous exhibition catalogues.