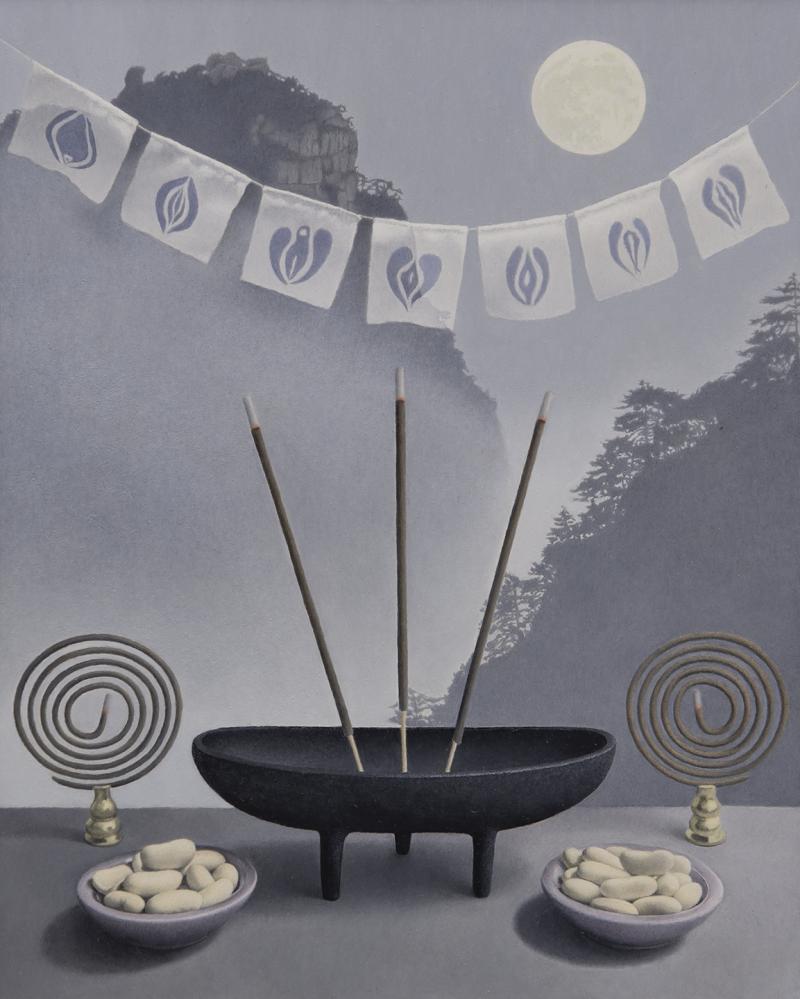 In his book The Souls of China, Ian Johnson describes the gradual re-emergence of yangsheng, the ancient Chinese art of nourishing life, in the decades since the Cultural Revolution. As evidence he offers sightings of books on traditional teachings, men’s bracelets worn to show piety, religious icons on taxi dashboards, and roadside offerings of burned paper. These tangible objects, along with increased attendance at temples on holy days and other spiritual customs and rituals began to resurface organically, as grassroots efforts rather than as directives from any religious authorities. Even after all religious life had been eradicated for decades, this seemingly innate drive toward a holistic view of life, a desire to integrate the material and the spiritual, began to arise spontaneously and instinctively.

Meditation: Pilgrimage was inspired by Ian Johnson’s explanation of Chaoshan Jinxiang, which means “to pay one’s respect to the mountain” and “to present incense.” He writes about the reverence that Chinese have for mountains, which are considered the home of the gods or the intersections of heaven and earth. Johnson also recounts a particular pilgrimage to Mount Miaofeng and the Miao Feng Shan Goddess Temple. One particular focal point of the pilgrimage was the cooking and serving of (karmic) beans to those taking the centuries-old trek. Johnson explains how this tradition stems from the practice of monks who invoke the Buddha’s name in prayer. To keep track, they would move a yellow bean from one bowl to another each time they uttered the holy word. 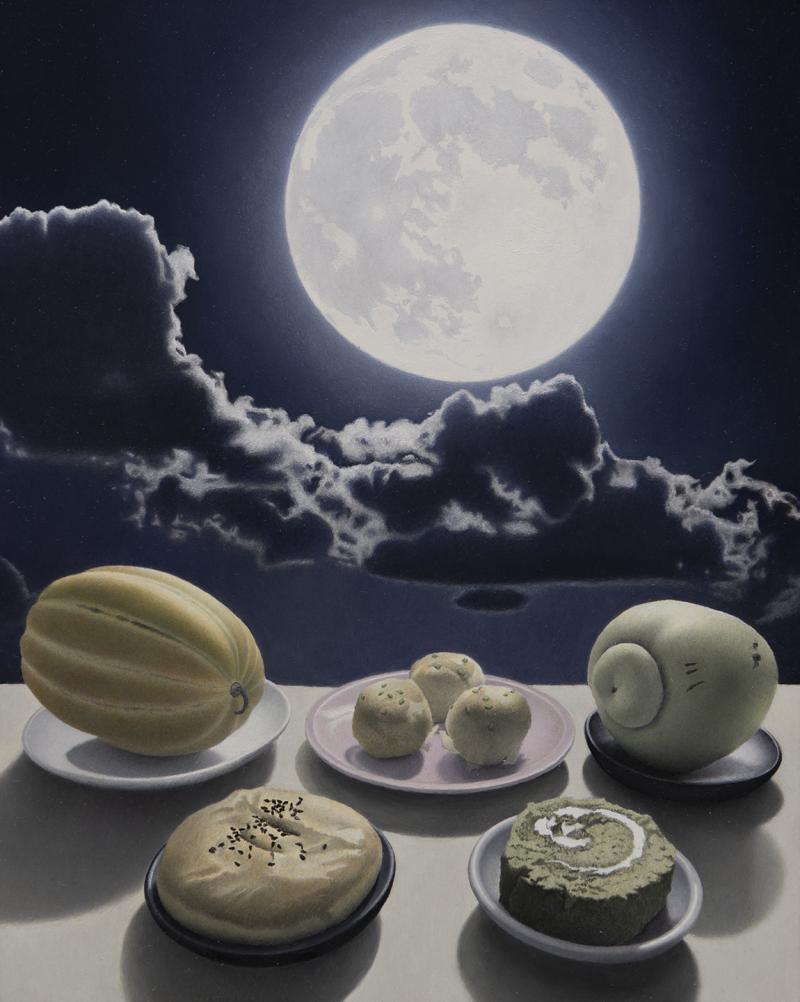 Meditation: Renewal was inspired by a passage in the book Wild Swans where the author describes the Mid-Autumn Festival, a time when the moon looks especially large and round. Following custom, round cakes (“mooncakes”), buns and melons would be set out on a moonlit table. Their round shape symbolizes family union. These evocative descriptions have stayed with me and have informed the way that I think about traditional customs and rituals and their place in modern life. Their greater significance may not be in any of the specifics but rather as reminders that matter and spirit are inextricably linked.

I’ve long been interested in how human beings assign meaning to material objects. My earlier work focused on food and meaning, depicting themes such as food and morality, food and identity, and the religious significance of food and fasting. In my recent paintings, I’ve been exploring the human drive to express our spiritual needs materially through the use of ritual objects in shrines, altars, and other contemplative settings. Participating in this cross-cultural seminar was an opportunity to expand my thinking on how matter and spirit come together in our collective search for meaning. There are many layers to how we manage our material and spiritual needs. I’m fascinated by how we use rituals to grapple with being human and how we create sacred spaces, both public and private, to help us connect to our inner world and to the numinous dimension of life.
—Lauren Schiller

About the Artist
Lauren Schiller is Professor of Art at Seton Hall University where she teaches painting, drawing, and printmaking. Lauren received her M.F.A. from the University of Wisconsin, Madison. Her work has been included in exhibitions at the Adam Baumgold Gallery, the Allan Stone Gallery, and the Painting Center in New York City as well as in two editions of New American Paintings. In 2008, Schiller received a top Fellowship Award in Painting from the New Jersey State Council on the Arts. She lives with her husband, a printmaker, in Middletown, New Jersey between New York City and the New Jersey Shore.