A 75-hour campaign for the Westmont Fund celebrating the 75th anniversary raises more than four times the goal of $75,000. 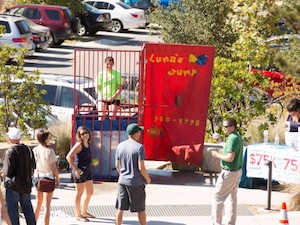 The 75 hours started at 4 p.m. PDT Oct. 24. By email, President Gayle D. Beebe challenged alumni, parents, faculty, staff, friends and students to celebrate Westmont’s 75th Anniversary by making a gift to the 75-in-75 Campaign. Messages also went out through Facebook and Twitter. Could the community meet the goal of raising $75,000 for the Westmont Fund in 75 hours?

“We thought this campaign would be a great way to celebrate God’s faithfulness,” says Ryan Bennett, director of annual giving. “The Westmont Fund provides essential support for scholarships and grants to make tuition more affordable as well as resources to attract and retain world-class faculty. Student life programs, student research, athletics, and the visual and performing arts also depend on the Westmont Fund. We want to help the college flourish another 75 years.”

People who gave online could watch the total grow, which created excitement, especially among alumni at Homecoming. The annual giving office set up tables around campus where people could give and sponsored a dunk tank (right) to get students involved. For $7.50 for three throws, they dunked professors or resident directors.

When time ran out at 7 p.m. PDT Oct. 27, the campaign had raised $352,480 from 691 donors, including some matching funds. “These gifts will help us develop the next generation of Christian leaders to serve in every sphere of society,” Bennett says.