If you went back in time and met some Westmont students from the 1950s, they might not have time to talk to you. They’d be hurrying off to the library to study or to a meeting about a short missionary trip to Mexico. Perhaps they’d be packing for a retreat or trying to find tools to help with the construction of a new campus building. Even in the supposedly idyllic 1950s, Westmont students had busy lives. 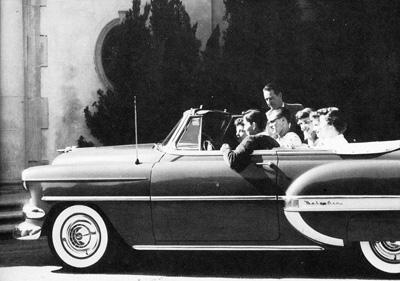 Dating didn’t seem to be a popular pastime except as a topic of conversation. An unsigned letter from 1954 laments, “There is no, and I mean no, reason why so many of our women students should be dateless so often.” Another letter asks, “Why is it that whenever a guy is seen more than three or four times with the same girl, he is automatically, in the eyes of fellow students, going steady and practically engaged?” Yet another letter is philosophical. “Keep thine eyes open for social isolates of the feminine variety.”

Coming and going was a bit difficult, though. Women students signed in and out with their housemothers when leaving or returning to campus. Freshmen had to be in by 7:15 pm on week nights, but could stay out as late as midnight on weekends. Men had no hours. But if a male student kept a date out late, both of them would be penalized. When a serious dating relationship developed and a couple decided to get married during the school year, they had to get permission from the dean of students at least 30 days before the wedding and present letters of permission from both sets of parents.

TWIRP (The Woman Is Required to Pay) eased the dating vacuum a bit. In this annual event, the women took the initiative and chose their own dates. The November 12, 1954 edition of the Horizon records the excitement. “Tonight is the thing that every coed has hoped for, planned for, and lost sleep over. Tonight each girl will escort the fellow she succeeded in trapping and tagging sometime since Wednesday noon to the biggest, most stupendous Women’s Open House in Westmont history.” These open houses involved the women asking (“trapping”), hosting, driving, entertaining, and paying for the entire evening.

TWIRP, however, was the exception rather than the rule. Many activities were not coed-oriented. Each fall the men and women parted ways for separate weekend retreats. Students heard sermons by a guest speaker, studied the Bible, and prayed together. The men also competed in an unofficial beard-growing contest.

The ladies’ campus club (Wives or Women Students) sponsored a reception for engaged women each year. In the spring of 1956, the topic of the WOWS’ spring event was, “The Woman’s Relationship to Her Husband, Home and Children.” After the discussion, the women received booklets containing the WOWS’ favorite recipes.

The dorms bustled with activity – except during the early evening when quiet prevailed for studying. The women lived in Cold Spring Unit I (currently the Art Center) and Emerson, a house less than a mile from campus which is now a private residence. The men lived in Cold Spring Unit III, (now the home of the English and modern language department) and Catherwood Hall (which burned down in 1964). “Q-ville” (a group of Quonset huts) sheltered a privileged few male students.

When they weren’t enjoying conversation by the fireplace in one of these residence halls, students liked to unwind in Kerrwood Lounge and gathered around the piano for sing-alongs after dinner. Later in the evening, after lights went out, women might hear the strains of “You Are My Sunshine” as a group of male students with a ukulele serenaded them outside their windows.

Ghost walks, games, and spooky stories made Halloween a favorite event. The traditional ghost walk extended through the gardens and paths of the campus. Students played games on Kerrwood Lawn, but the real action took place in Kerrwood Hall where students could test their bravery in the Haunted House. Or they could make their way to the library where a student read stories into the night. 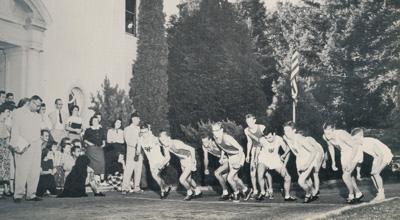 Although Kerrwood Hall made a great Haunted House, the student body began to outgrow the building in the mid 1950s. It simply wasn’t big enough to hold classrooms, the administrative office of the College, the library, and the offices for student organizations. So in the fall of 1954, students decided to construct a building to house the offices of WCSA, the Horizon, and the Citadel.

Students oversaw “Operation Elbow Room” from raising money to the actual construction. They held a work week around Santa Barbara to raise money. The junior varsity basketball team and the faculty staged a basketball game with proceeds benefiting the project. Students even appeared on the local television station nine times to publicize fund-raising events. Almost all the 325 students on campus contributed in some way to Operation Elbow Room. Today that building houses the post office.

Students volunteered for a number of different ministries in the local community, especially Young Life, an outreach to high school students. Through the years many Westmont graduates have joined Young Life as full-time staff members. This tradition continues in the 1990s as many current students lead Young Life groups.