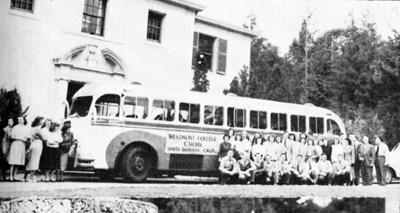 The first Westmont choir went on tour like all Westmont choirs do. But unlike its successors, this choir counted one-third of the student body as members. How did Westmont manage to field a 30-voice choir with only 94 students?

When John Hubbard heard the choir in the early 1940s, he asked Director Helen Catherwood Strandberg that question. “I remember very clearly that she said, ‘Well we do a lot of praying…After I came to Westmont and saw how she worked with the choir, I realized there was a good deal of hard work and many other things that went into it besides prayer! But I appreciated the answer.”

Hubbard thought highly of the choir. “I was very impressed with the quality of the students, the excellent performance, and the spiritual atmosphere that prevailed.”

John Lundberg also heard the choir that first year and shared Hubbard’s enthusiasm. “[Helen] did a wonderful job. She was good. I was really impressed with that choir.”

President Emerson deliberately emphasized music during the early years of the College. He considered it a “desirable part of the life of a normal individual,” and he knew its public relations value. Musical groups built relationships with churches, recruited students, and spread the name of Westmont.

Several ensembles flourished that first year. The trumpeters, a women’s trio, a men’s quartet, and a string quartet also performed for churches. By 1941 the College added a string trio, a mixed sextet, and a little symphony orchestra. World War II made it difficult to continue all these groups. But a musical tradition had already taken root, and it continued despite the war. 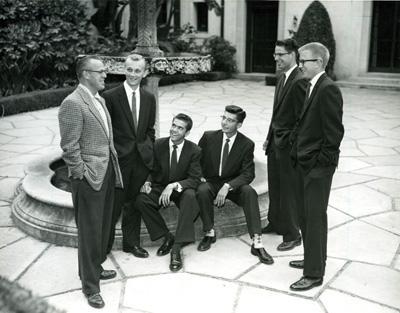 This tradition embraced both performing and sharing the gospel. The choir stated their purpose as follows: “To provide a means whereby consecrated Christian young people with musical ability may serve the Lord Jesus through spirit-filled choral singing and personal testimony.”

John Hubbard joined the music faculty in 1944 as chair of the department. “My mandate was to try to pull together the activities of the music department…I recall Dr. Emerson saying to me, ‘We don’t care whether you actually teach any course or not’….However, I did do some teaching that first year, and gradually…began to work my way up to practically a full-time teaching load.”

Hubbard began directing the choir in the late 1940s. “I had inherited a very strong choral tradition. There was no need to build on that. My problem was to maintain it at the high level of musical and spiritual quality that it had already manifested through the earliest years of the school.”

Singing in the choir gave students a chance to develop musically and spiritually. According to Hubbard, “The finest music available is religious music, so there is no difficulty combining these two elements.” The choir also grew as a group. “People with diverse backgrounds and personalities….[were] welded by a common cause, prayer, study of the Scriptures…and by hard work…This was one of the highest values of the choir work during those years.”

Hubbard also considered the choir a public relations tool. “It was one of the best ways I knew for people to get a sampling of the type of student who came here.” 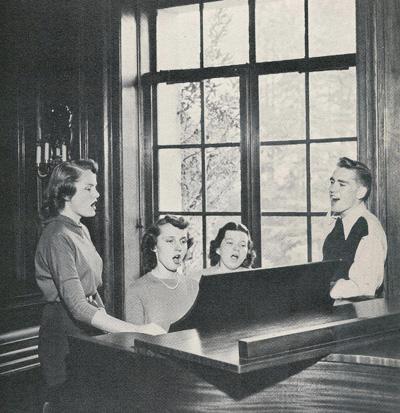 Maxine Kincaid ’61 remembers singing under Hubbard. “The year 1956 will always remain in my heart and mind…Our tour was an experience never to be forgotten. We had concerts that were good and poor, but the last night Mr. Hubbard told us he was leaving Westmont. As of one mind, the choir sang as they never sang before. The outpouring of love through song for this inspiring, beautiful human being could be felt and heard by all. Ralph De La Vega got a picture of him over the shoulders of the choir. John was living each word and note as he directed us. What a blessed man and friend. He shared and gave so much to us. I thank him for all that and for his sincere love for us.” Hubbard didn’t actually leave until 1963 when he went to Manila as a musical consultant with the Far East Broadcasting Company.

In 1955, Hubbard’s wife, Ruth, became seriously ill and died a few days later. The alumni decided to build a music practice building as a memorial to her – many had known her well. Hubbard designed the facility. The Ruth Gapen Hubbard Memorial Building has provided practice space for generations of Westmont musicians.

John Lundberg came to Westmont in 1947. For his first solo in chapel, Hubbard asked him to sing an upbeat spiritual called “Shadrach.” Lundberg had his doubts. “I only did it for high school assemblies…it was kind of a raucous thing…[But] it was amazing. It practically brought the house down…At the end of chapel that day they asked me to lead in prayer, so I did…Gracie King…said to somebody, ‘Well, when I heard that Shadrach I wondered about this young man.’ But she said, ‘When I heard him pray I figured everything was all right.’”

Lundberg’s duties included teaching voice and directing the male quartet. After Hubbard left he began working with the Westmont choir. He also sang for six years with one of the best quartets of the time: the Charles E. Fuller Old Fashioned Revival Hour quartet. This group performed every morning at 7:30 for a live radio broadcast from Hollywood. Lundberg lived in Santa Monica and commuted to Westmont two or three days a week to teach. “I almost quit the College because it was so taxing. But I really felt the call of God to come here.”

For 22 years he worked with the Westmont quartet and arranged most of their music. Lundberg remembers the many quartet members with affection, tossing off names and telling anecdotes about each one. “At one point I needed a first tenor and quickly taught Dave [Hubbard], normally a second tenor, the part. It took five minutes for him to catch on.

“I met John Felton when he was a baby and I was singing in the varsity quartet at the University of Washington. The bass in the quartet was John’s uncle. John grew up to have a marvelous bass voice.

“During the mid 1950s on a tour in the Midwest, two young men followed the quartet around. Paul Sandberg, who had sung for the Haven of Rest ministry was one, and Paul Sjolund, who turned out to be a very good composer and conductor, was the other. Mrs. Kerr helped them get scholarships to attend Westmont. Also, Peter and Chris Geddes opened their home in Pasadena to the quartets, and gave them a key to the house so they could raid the refrigerator any time.”

Paul Sjolund returns the compliment. “John Lundberg was the first all-out professional musician and singer I studied under. He was qualified to teach you in any aspect of music, and it was a joy and a thrill to be challenged to the absolute limits every day. He was both a natural born musician from the heart and a thoroughly prepared and academically knowledgeable scholar. It was exciting beyond belief. John Lundberg was the principal reason the quartet was capable of delivering a powerful, professional, and spiritually effective performance.”

Sjolund, an internationally known composer who had published several hundred works, also recalls the encouragement he received from Rudy Atwood, the finest gospel pianist of his time, and John Hubbard. “Hubbard started me down a road that has become a lifelong career. He gave us an assignment in class to write an original anthem, and he submitted mine to a publisher who accepted it for publication. I am a published composer today because Hubbard took the time to invest in one student.”

The quartet toured both during the school year and the summer. They sang every Sunday, morning and evening, and during nine to 11 weeks in May, June, and July throughout the country. Paul Sjolund spent three years with the quartet and performed in 500 concerts in 34 states and five Canadian provinces. The men appeared on TV, in churches, at banquets, and for Billy Graham crusades. Many students came to Westmont after hearing the quartet. Often they knew nothing else about the College.

But quartets went out of fashion in the late 1960s, and Lundberg recommended disbanding Westmont’s in 1969. Three years ago, students revived this tradition, and Lundberg has been working with them.

The quartet, like the choir, has played a large role in recruiting students and representing both Westmont and the Gospel. According to Lundberg, “Music is only a vehicle through which the text of the gospel is heard – the text is the whole thing.” Westmont ensembles of the 1940s and 1950s used the vehicle well, both musically and spiritually.