The decade of the 1950s opened to a troubled scene at Westmont. In April the board of trustees asked President Forrester to resign, and a large number of faculty left with him. Forrester had pushed to move the college back to Los Angeles. The Board’s reluctance to take this action and the resulting conflict explains much of the problem.

But Forrester’s exodus didn’t cause a major setback for Westmont. The College had too many faculty for its student body, so the departure of some actually helped. John Lundberg, a professor of music, recalls, “We were overstaffed in a lot of areas. My first reaction was... ‘Well, we’re not going to miss them that badly.’ Although they were fine people…it really helped us….get the budget down to where we could operate.”

Few students left because of the controversy surrounding Forrester’s resignation. Music professor John Hubbard remembers their reaction. “I was quite favorably impressed with…the maturity of the students in their response to the whole situation. And, in general, they remained very loyal to the College.” The next fall, Hubbard noticed a new attitude among the faculty. “There was a return to the kind of unanimity of spirit and a loyalty to the school, a confidence…and a fellowship with one another which I had so greatly enjoyed in previous years at Westmont.”

Frank Hieronymus, who attended Westmont in the 1940s, returned in the fall of 1950 to teach history. He thought faculty morale was quite good. “I did perceive that the faculty had gone down in numbers and in quality, but they had not lost any of their enthusiasm for the place, or their degree of dedication.”

An unusual chapel service soon after Forrester’s resignation brought revival to campus. Lundberg remembers it in detail. A student stood up in chapel one day and said he needed “to get things right with the Lord. And another person stood up behind him, and pretty soon he had a whole line of kids standing, waiting for an hour to get a chance to confess their sins and get right with God.” The service lasted all day and into the evening. “We’d sing and pray, and the faculty would get up there and say whatever they wanted to say…Classes were dismissed for the day…And I tell you, talk about catharsis, it was so silent on the campus…Nobody was talking to anyone – just a kind of holy hush over the whole place…It was a remarkable moving of the Spirit of God.”

The board immediately began the search for a new president and soon chose Roger Voskuyl, academic dean at Wheaton College. Voskuyl had earned master’s and doctorate degrees in chemistry at Harvard and served as a group leader on the Manhattan Project during World War II. In 12 years at Wheaton he had risen from instructor to professor to dean.

Why did Voskuyl leave the security of Wheaton for the uncertainty of Westmont? The advice of his close friend Dr. C.C. Brooks convinced him to make the move. “In his wisdom, Dr. Brooks said, ‘At Wheaton you can keep the wheels turning – at Westmont the sky is the limit.’” 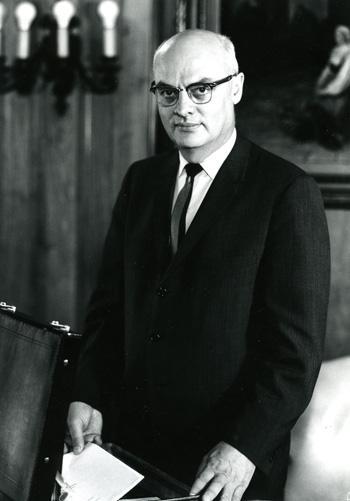 The faculty welcomed Voskuyl warmly. Lundberg remembers being very pleased with him. “I thought, here’s a man of stature, a godly man, he’s got all the credentials, and I thought it was a condescending move on his part to come here.”

Lundberg also recalls hearing Voskuyl speak in chapel. “In his first chapel talk he said, ‘I’m so happy to be here at Wheatmont.’ It just cracked up the student body.”

Voskuyl had good reason to be confused. “Mind you, I had visited Westmont on August 22, resigned from my position on August 31, and arrived in Santa Barbara on September 15. That was the fastest, most dramatic move I’ve ever made in my life!”

Westmont even helped Voskuyl move. He tells the story well. “At the board meeting at which they decided to offer me the position, John Wilks spoke up….[He] said, ‘Paton Yoder (who had been dean of the faculty and just moved back east) bought a horse trailer from me for $100. It’s large enough for two horses. You go to Goshen, Indiana, buy it from him for $100, move your things, come back here, and I will buy it from you!’ That was the Board’s assistance for our move.”

Moving from Illinois with two cars, two trailers, and four children seemed easy compared to the task Voskuyl faced as president. He had to build financial stability, attract qualified faculty, gain accreditation, and expand the campus and the enrollment. And then there was the problem of sewage.

Kenneth Monroe, who served Westmont as professor, dean, and acting president, remembered the day Trustee Rolf Jacobsen spoke in chapel. “He stood at the podium for a long time, looking from side to side over the group. He said, finally, ‘When the board of trustees thinks of you, they always think of sewage laterals.’”

Voskuyl knew Westmont needed financial stability, and he made it a priority. After he came the College never missed a payroll. He adopted the wise policy of not expanding beyond what the institution could support financially. This pragmatism served Westmont well – the community settled in with a feeling of greater security and optimism.

The faculty needed rebuilding after the Forrester exodus. According to Voskuyl, “The first time I went to a faculty meeting, I was quite disappointed in what I saw. Remember, I had been presiding over quite a prominent and well-established faculty at Wheaton….To attract people of professorial rank was difficult…[the dean had] sought people who were doing graduate work and…needed to teach….I felt we should seek those who had doctorates, perhaps settle for less, but then encourage them to finish their work.”

Hieronymus, who became academic dean in 1955, stressed the necessity of professors with doctorates. “The most important decision, probably, that I made was…to pay a thousand dollars or more extra for a person with a doctorate than we would pay for those with a master’s.” A number of faculty who came to Westmont in the 1950s had doctorates, and many professors went back to school to earn them while still teaching.

Voskuyl picked up Emerson’s determination to gain accreditation. Early in 1956 he wrote, “It is the pledge of this administration to make accreditation foremost in all of our studies.” The faculty prepared for a visit by the accreditation team in early 1957. But the answer proved disappointing – the committee recommended a two-year probationary period for Westmont. They required progress in developing a better liberal arts curriculum, a library, and an endowment.

In 1958 Westmont submitted a report detailing progress in improving the quality of faculty, raising faculty salaries, expanding the library, and making changes to the curriculum. The good news came in March when Westmont received a three-year period of accreditation from the Western College Association. When Voskuyl shared the news with students in chapel, they became so excited that the scheduled speaker never got a chance to speak.

Westmont enrolled 219 students in the fall of 1950, a number hardly adequate to support a good program. By the next fall, enrollment reached the maximum of 298 set by the County. The existing facilities couldn’t handle this number comfortably. So Voskuyl suggested enclosing the south patio of Kerrwood Hall to provide space for studying and dining. He also proposed an athletic field, a residence hall, a gym, a chapel, and a dining hall.

The gradual expansion of the campus began with the addition of Kerrwood, called the Garden Room, completed in 1953. It cost $16,000. This project sent two important messages, one to Westmont’s constituency, and one to the local community. Westmont intended to stay in Santa Barbara, and it planned on growing despite the limit on enrollment.

Both the County and the Montecito Association approved the College’s request to increase enrollment to 323 in 1953. Their response opened the door for further increases. In 1955 Westmont got permission for 375 students and a future enrollment of 650. 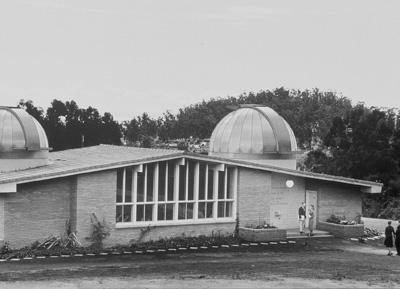 But the College needed a residence hall and a dining commons. Raising the money for these large buildings seemed almost impossible. But the federal government began loaning money to colleges for residence halls and dining commons. Voskuyl thought Westmont should accept this funding. “I felt this was a program we should pursue. It seemed to me to be the only means of putting a building on the campus as the first major construction on the estate.” The board initially decided against using government money but later relented. So Westmont built Page Hall and the old, flat-roofed dining commons.

By 1960, Westmont had nearly 500 students, four new buildings, and an expanded Kerrwood Hall. The College was accredited, and faculty received pay in full and on time based on their level of education. In 10 years, Voskuyl, the trustees, and a dedicated faculty had worked a miracle – thanks to the constant faithfulness of God.