HISTORY: 1960S A Green Oasis in a World of Gray Ash 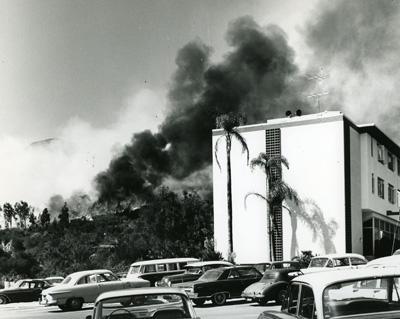 A thin curl of smoke drifted into the sky near Westmont on a hot afternoon in September, 1964. Students could see the fire across the canyon on Coyote Road as they walked to class. At first the danger seemed slight. But strong winds pushed the blaze closer to campus. By late afternoon, flames tore down the hill next to Page Hall as students and faculty watched anxiously from the parking lot. For two sleepless nights the Coyote Fire ravaged the foothills, threatening the College and the entire Santa Barbara community.

Firefighters set up the main fire camp at Westmont within a few hours. As daylight disappeared, the wind arose and blew the fire down out of the hillside. Men on campus changed clothes and prepared to protect the College. Women started packing. When they got word to evacuate, students fled to private homes and local schools and motels.

Dorothy Docking, a new professor from England, had a temporary room in Van Kampen. “As I waited with the men on the V.K. steps, the sheriff announced on the radio that V.K. residents were to take blankets and spend the night in the junior high gym. I obediently took a blanket and asked if there was room for me in any of the men’s cars. Dr. Lyle Hillegas…happened to be near and had me taken to the Montecito Inn where I shared a room with a Unit house mother, Crystal Barker. There we spent our days on the balcony, watching people, cars, furniture, mattresses, horses, and dogs streaming from Montecito to escape the fire.”

The call to evacuate interrupted a birthday party in Page Hall. The women left the room so quickly they forgot the gallon of ice cream on the desk. One young woman arrived at a Santa Barbara home holding a giant stuffed panda bear. She wore a large raincoat with nothing but a two-piece bathing suit underneath.

About 100 men stayed on campus to fight the fire. Professor Ed Bouslough joined the army above Page Hall that held off the blaze with hoses and equipment. “Wherever the flaming embers swirled, the Westmont men were there with shovels and hose and forks and sacks and sometimes nothing but their own soggy tennis shoes, digging, swatting, or stamping out the flames.”

A small group camped out on the roof of Page Hall, keeping it wet. Others worked to save faculty homes on Westmont Road and Circle Drive and the John Pickett residence north of campus. In an interview on the national Huntley-Brinkley news program, Mrs. Pickett thanked Westmont students for preserving her home.

As the morning light struggled through the clouds of smoke, the wind expired. By midday, the fire had consumed 3,500 acres and 15 homes. But the campus remained untouched. The worst seemed over – a few residents of Catherwood actually moved back to their rooms.

That evening the wind roared down from the mountains again, spreading flames east to Summerland and west to San Marcos Pass. The fire resumed its attack on the College with greater ferocity, threatening Emerson Hall on Ashley Road as well. Fires started in the small prayer chapel next to Emerson and in a nearby tree. But students put out both blazes.

President Voskuyl stayed off campus and watched the fire. “It was a strange experience to stand on a hill a mile away looking across the valley to the campus, trying to judge which building was ablaze. At one point we were almost certain that Kerrwood was gone….We felt numb in thought, helpless in what could be done in that inferno which was only a small part of the larger nine-mile inferno that night.”

But they could pray, and the Westmont community prayed incessantly. Students who evacuated formed prayer groups, and Mrs. Kerr roused trustees and friends across the country at three in the morning. As President Voskuyl later wrote to friends, “Yes we knew concern. But never a time of hopelessness. Always we experienced a steadfastness of heart.”

Professor Bouslough returned to campus that second night. “Everyone was fighting and crying in frustration, because no matter how many fires you put out, new ones came snowing out of the sky. It was a picture of flame and heat and smoke and embers and too little of the vital element – water. The embers were like snow – beautiful but frightening.

“The Westmont men were every place, roaming like hungry wolves, pouncing on every ember. A fire flared up in the garden and was quenched. A tree became a blazing torch by the Units, and was put out.”

Scott McLeod ’67 also stayed behind to fight the fire. “[We] knew how close [the campus] came to literally going up in flames. We put out many fires that easily could have grown out of control,…I recall stomping out flaming underbrush on the hill above Kerrwood, and hosing down trees vulnerable to the flying embers.”

But when Catherwood Hall caught fire, the men couldn’t save it. Dr. Bouslough described the dormitory as a “raging blowtorch.” Today the President’s house sits on the site of the lovely old estate that housed 35 men.

The men who stayed behind expected to lose more than Catherwood. According to Dr. Bouslough, “[We] were able to stop the fire on the ground, but we didn’t know how to cope with the flames in the trees. I remember standing in the roadway inside the main gate trying desperately to keep the fire from the heart of the campus…As we stood there watching, not knowing what to do…all at once a fire truck from Los Angeles drove through the gate….The firemen sprang from the truck, unreeled the hose, sprayed into the tops of the trees, put out the fire, and saved the campus.”

As students and faculty returned to campus the next morning, they found only Catherwood missing. President Voskuyl described the College as a “green oasis in a world of gray ash.” The fire scorched nearly 90,000 acres in all and destroyed more than 100 homes.

Dr. Bouslough remembers the emotional chapel service held that day to thank God for his protection. “The first song we sang was ‘Great is Thy Faithfulness.’ It breaks me up every time we sing it. No, I’ll never forget.”