Westmont students, faculty, and staff moved a library in the spring of 1968. They didn’t actually have to lift a building. But they did carry every book and magazine from the old library in Kerrwood Hall to the new Roger John Voskuyl Library.

College officials originally decided to name the building the Armington Library after Mr. and Mrs. Everett Armington. These generous friends played a major part in funding the project. But the Armingtons had a surprise for Dr. Voskuyl, whose birthday fell on moving day. Usually a quiet man, Everett Armington asked to speak before the move began. He announced that he and his wife had agreed with the trustees to name the new facility the Roger John Voskuyl Library. The Armingtons didn’t know that the next day Dr. Voskuyl would announce his resignation as president of Westmont after serving 18 years. 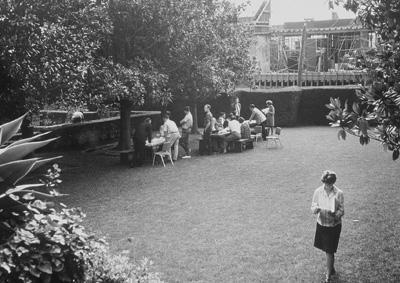 The Westmont library move stands as quite a feat. Entire books discuss the subject of moving a library, and the process can take days. But Dr. Vernon Ritter, the head librarian, had the advantage of previous library moves at other schools and lots of volunteer help. Classes were canceled for the day, and everyone went to work. Each person simply carried a stack of books from its old home to the new stacks. At the entrance of the library building, they learned where their books were to go. The secret of the move was the preparation that took place months before a single book left the shelf.

Dr. Vernon Ritter designed the move. “I had been involved in library moves at other schools, so I had a pretty good idea of what needed to be done. It was a matter of knowing how much space each classification of books would take up, and marking off the right amount of space for the books to go. I measured as closely as I could how much shelf space would be required in linear feet in the new library. We planned it so we would know where to send the various lines of students. The success of the move depended on precise organization. But it was also important that the people carrying the books follow the plan. Since we were working with college students, I wasn’t too worried. I knew they’d catch on, and they did. Everyone just put their hands to it.” 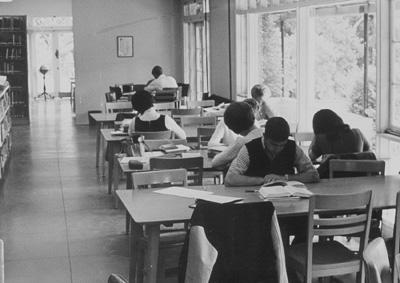 Ned Divelbiss, who recently celebrated his 25th year with the Westmont library, speaks highly of Dr. Ritter’s moving plans. “You wouldn’t believe how smoothly everything went. Vern had foreseen every possible problem, and he solved it before it could happen. We didn’t have to do any advanced training of any kind. About 450 people showed up that morning. They just followed the directions Vern gave them. We had books coming from the main library in Kerrwood on the first floor, from Kerrwood’s second floor and basement, and Page Hall as well. All the different groups just followed directions and went straight to the right section. It was as simple as taking the books from the old shelves and putting them on the new ones. The way the whole school came together was one of the most beautiful events I’ve seen in my 25 years here.” 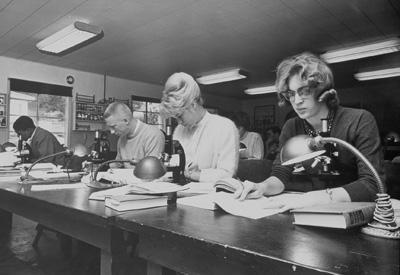 Dr. Ritter and President Voskuyl were standing on the stairs inside the new library when the last books arrived that afternoon. Dr. Ritter recalls, “I suggested to Dr. Voskuyl that it might be a good idea to sing the Doxology. We gathered everybody together and sang it. And then the new library was ready for business.”