HISTORY: 1960S The End of the Beginning

A gulf greater than 10 years separates 1960 from 1970. The world of colleges and universities shifted its axis during that difficult decade. Westmont changed too, but in a different way. Despite the upheaval elsewhere, the curriculum and mission at Westmont remained unchanged. The College experienced a coming of age, not a revolution. The faculty, the campus, and the enrollment grew up in the 1960s. At the same time, many traditions died out. So the 1960s marked the end of an era – the end of Westmont’s beginning. 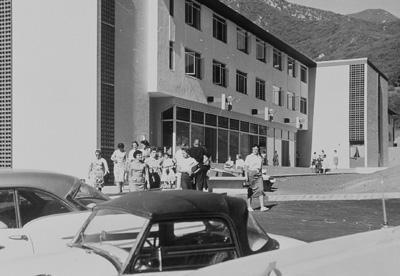 The campus erupted with buildings in the 1960s. Westmont built or acquired 12 of its 24 major facilities during these years, including Voskuyl Library, Murchison Gymnasium, Porter Hall, and the Dean School complex. Three new residence halls (Clark, Van Kampen, and Armington) housed the growing number of students.

President Voskuyl rejoiced over the growth of the campus, but noted in 1965 that buildings “are but the container in which the educative process takes place…the faculty [is] the catalyst, bringing about the maturing process more completely.” The president worked with Dean Hieronymus to strengthen a faculty he described as “young” in 1960. “A college 20 years old does not have a backbone of faculty who have taught for 20 years and who have had time for meditative research.”

But the faculty matured in the 1960s. The number of full-time professors grew (from 29 to 49) as did the percentage of those with doctorates (from 38% to 57%). Meanwhile, teaching loads decreased. According to the dean, professors used their extra time “to engage in greater depth of study in their own field, in research, and in writing.” They also concentrated more on their areas of expertise in the classroom. As a history professor in the 1950s, Dean Hieronymus had taught “everything in our curriculum, except Latin America and the Far East.” Faculty no longer stretched themselves so thin. 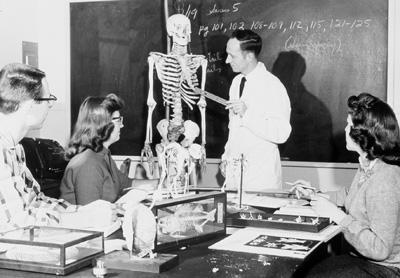 Enrollment set a record nearly every fall during the 1960s. The number of students jumped from 490 to 892 in ten years. In 1961, the Horizon questioned the rapid growth and suggested keeping enrollment at 500 for five years, arguing, “Any increase in enrollment will require increased performance from every part of the college. This increased effort would detract from the program to bring Westmont to maximum quality.” But the College kept expanding without sacrificing quality. The addition of badly needed facilities and professors actually improved education at Westmont.

Each year the College moved farther away from the struggling institution of the 1940s and early 1950s. If size changed Westmont, so did the decline of traditions like freshman initiation, senior sneak, and the Homecoming parades.

Initiation subjected freshman to three days of enslavement to the sophomore class. The theme differed each year – from “A WestMonster is Born” in 1960 to “No Time for Privates” in 1962. Freshmen wore special beanies, performed menial tasks for sophomores, and wore ridiculous clothing. As a Horizon editorial noted in 1961, “Some will remember Initiation as the chance to return the favors done to them by last year’s sophomore class. Others will remember it as a time when they felt that the best definition of a sophomore was ‘evil one.’”

One student criticized freshman initiation in a letter to the Horizon in 1962. “I think the associated activities are frivolous and time-consuming, showing a lack of seriousness in intent, and serving no purpose other than to alienate personalities and bring enmity between the two participating classes.” According to the sophomores, the purpose of freshman initiation was “to welcome the freshmen, to orient them to the ways of Westmont, and to unite them as a class.” But concern about dangerous initiation practices on other campuses ended the annual rite in 1965.

Senior Sneak also pitted class against class, but with greater goodwill. Each year the senior class tried to “sneak” off campus for a three-day retreat without the junior class catching them. If the seniors succeeded, the juniors hosted a steak fry for them. But if the juniors caught them, the seniors picked up the tab for dinner.

Seniors laid elaborate plans to evade the juniors. The class of 1968 scheduled a senior barbecue the day they planned to sneak. According to the Horizon, “To allay junior suspicions, senior social chairman Mikki McFadden went ahead and bought $30 worth of hamburger, charcoal, and potato chips.” Sometimes seniors faked a sneak, as they did in 1968. “If underclassmen see juniors running around like lost sheep, it is because they think the seniors are leaving. For instance Sunday September 28, the juniors were out in force combing the campus for seniors leaving in groups of three. Alas! It turned out to be a fine ‘R.F.’ on the juniors.”

But this ploy didn’t always work, as the class of 1966 discovered. “Three fake sneaks and two retreats enabled the seniors to organize themselves and plan a fool-proof method to beat the juniors – only to discover that the juniors outsmarted them every time.” Usually, the seniors got away. “The word is out that the juniors were caught napping!...The class of ’63 made their getaway in perfect fashion.”

Once they left campus, the seniors traveled to places like Yosemite, Lake Arrowhead, and Palm Springs. They played, ate, and joined in Bible study and prayer together. Sneak strengthened ties among class members and served as a rite of passage. Seniors stopped sneaking sometimes during the early 1970s. 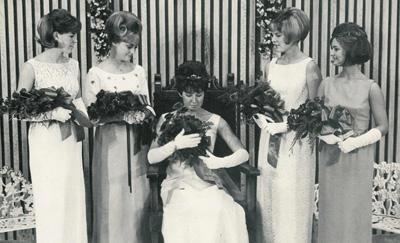 Students in the 1960s didn’t make elaborate sets for Spring Sing – they built floats for the Homecoming parade. The Homecoming queen and her court presided over the parade and other festivities. But students became more and more critical of the parade and the costly floats. In 1969 the student council voted to stop building floats, citing their poor quality, the cost, and the small number of spectators. The practice of choosing Homecoming queens also ended. Today Homecoming focuses on alumni and involves students only peripherally.

Students never rioted at Westmont, but they did stage an “All-School Fall-In” party in 1967. “‘Bring your own protest’ is the strategy for the human Fall-In scheduled to erupt at Emerson tomorrow….Dress is to be casual or grubby for the event which will feature the creation of protest signs and speeches….Protestors will be pacified with a non-controversial watermelon feed.” The Horizon responded to radical student newspapers with a 1969 front-page story featuring a huge picture of Ronald Reagan (then governor) and the slogan, “Eat grapes.” The editor hoped “to serve up an antidote to the solemn preachments of the revolutionaries.” But if the tumult in higher education didn’t touch Westmont directly, did it help bring traditions like sneak and initiation to an end? Or were other factors responsible, such as the growing enrollment and greater amount of time spent on studies?

Campus landmarks also disappeared in the 1960s, including Ries Tower. This unusual building (the oldest structure on campus) was originally a water tower. From 1950 to 1966, staff members Mr. and Mrs. John Ries lived on the second floor. The tower also housed the public relations office for awhile. Perched on the edge of the road across from what is now the post office, the tower came down in 1968 to make room for a wider road.

The construction of Voskuyl Library leveled the rose garden behind Kerrwood Hall in 1968. The Horizon lamented, “We are chagrined to bid you adieu, old rose garden. You symbolized for us…that ‘lost era,’ but for those duos who traditionally bade each other the same under your moonlit porticos, we can only hope that the secrets hidden in your blossom will rest forever in peace.”

The era of Emerson Hall ended in 1969 when the College sold the dormitory that had housed students since 1945. With the purchase of the Deane School and the construction of Armington, Westmont no longer needed the beautiful old mansion. Originally a residence for women, Emerson became a men’s dormitory in the 1960s. Emerson men gained fame for their victories in Spring Sing and the Pickett-La Paz Classic (a push-cart race), as well as for their care of Urnie, the statue that disappeared and reappeared as groups on and off campus captured it.

The resignation of President Voskuyl in 1968 clearly marked the end of an era. He announced his decision the day after Westmont received reaccreditation for a five-year period for the first time. With the campus and the curriculum well established, President Voskuyl moved on to a new challenge. He became the executive director of the Council for the Advancement of Small Colleges in Washington, D.C. His 18-year tenure as president brought remarkable change and progress, but not at the cost of the College’s heritage. Traditions may have ended in the 1960s, but the character of Westmont as an excellent Christian liberal arts college endured. As President Voskuyl wrote to the trustees, “I go with the same thought in mind as when I came: ‘Without Me ye can do nothing,’ but ‘with God, all things are possible.’” With the help of the Lord, he had brought Westmont College to maturity.