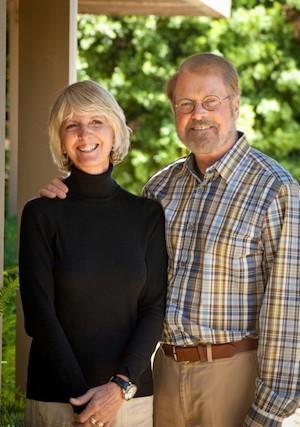 After a career as a graphic designer and owner of Neunuebel Graphics, Judy Van Horn Neunuebel ’69 now focuses on fine art. In her studios in Santa Barbara and Santa Fe, N.M., she creates mixed-media assemblages and will contribute several pieces to the 75th anniversary alumni exhibit in Westmont Ridley-Tree Museum of Art this fall. She took art classes from Tom Soule butearned a degree in English because Westmont didn’t offer an art major until the 1980s.

After the college created the Art Center for the newly formed art department, Judy got involved with the Art Center Council, serving as co-president for four years. She has worked with this group for nearly 20 years to support Westmont’s visual arts program, and she’s delighted with its growth.

“Adams Center astounds me,” she says. “The wonderful studio space is over­whelming. I’m excited that Westmont can use this facility and the new museum to reach out to the local community.”

Judy’s husband, David, has worked as a financial adviser since 1977, assisting clients with their comprehensive financial planning. A partner in Neunuebel Barrantes Wealth Management Group, he has met with Westmont employees for 10 years to advise them on their retirement accounts. Through several Westmont professors, he became interested in the Middle East and joined them in trips to the region. Witnessing the conditions there, he started a non-profit organization, Americans for a Just Peace in the Middle East, to educate people about the ongoing conflict. He testifies to the benefits of Westmont’s overseas study pro­grams. “It’s so important to see for yourself what’s happening in the world,” he says.

When they planned their estate, the Neunuebels made a provision for Westmont to support both the Westmont Ridley-Tree Museum of Art and the college’s Middle East Studies Initiative. They see Westmont as a great vehicle for what they want to accomplish: engender art appreciation and educate people about the Middle East. “We appreciate Westmont’s Christian perspective, and we’ve met people there we respect, admire and want to support,” they say. “We know the college runs its programs well and keeps them going—Westmont will continue what we’ve established.”