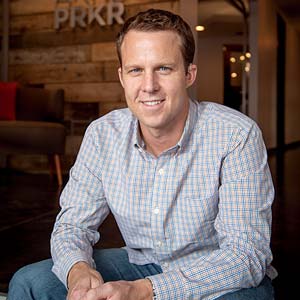 Geoff Akins ’97 grew up in Laguna Beach surfing, skim- boarding, and spending time at Yosemite Sierra Summer Camp. That’s where he heard about Westmont, a small college on the coast where he could surf between classes. It sounded perfect. Today he remains passionate about the outdoors, mountain biking, surfing and camping with his wife, Jenny Reitmaier ’96, and their two daughters.

Born with profound deafness in a family of art enthusiasts, Geoff grew to love art and majored in it at Westmont. He took all kinds of art classes: linotype, ceramics, printmaking and collage, which become his favorite medium. “Tony Askew and John Carlander were great advisers and friends,” he says. “Professor Askew even invited me to his home for dinner!”

Geoff’s mother taught him to read lips, but he struggled to understand professors when they looked away from him. “They were aware of this and helped me find a solution, like giving me notes and finding volunteers to take notes,” he says. “I had great roommates, and they kept telling me to not give up. My freshman counselor, Dwight Anderson, was incredible. He encouraged me to learn sign language and facilitated the hiring of interpreters, which made a huge difference. I grew much more independent at Westmont and had more confidence to figure things out for myself.”

Geoff found a summer internship at an ad agency and launched a career as a graphic designer. After eight years at several agencies, Geoff and Jeff Parker, a colleague and good friend, formed AkinsParker in 2004. “We have grown by networking, and we’ve been blessed to work with great people,” Geoff says. “I love working with clients who respect what you do. It’s rewarding to see their excitement.”

Geoff still reads lips. “I’m a visual person, so I can sense what people feel just by watching their body language,” he says. “I’m always looking at people’s faces, and I have a good system of learning what conversations are about even if I’m unable to follow them completely.”

The AkinsParker website reflects society’s increasingly visual orientation. “Nowadays, people keep busy and move quickly, so we design websites, ads, apps and videos with fewer words,” Geoff says. “People tend to turn away if the copy is too lengthy. We make it visually interesting to engage them. Look at Instagram or Facebook: It’s all photos with few words. Sadly, we live in a fast-paced world, and no one has time to write letters or talk on the phone!”

Geoff and Jenny tell their daughters about meeting during Europe Semester. “They want to go to Westmont,” he says. “It felt like a family. Professors and staff always found extra time to check on me.”