Westmont Magazine Around the World in 340 Days 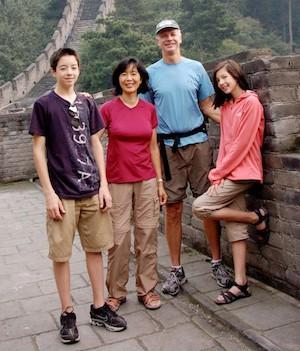 In 340 days, Phil Beccue ’81 and his family visited 33 countries on five continents, traveling 66,000 miles, staying in 99 cities, working on 10 service projects and snapping 80,000 photos. They walked away from their lives, leaving work, passions, friends and comfort—and they’d happily do it all over again.

“The trip gave us a unique opportunity to spend concentrated time as a family, participate in service projects and witness the variety God’s world offers us,” Phil says. “As I go toward the twilight of my career, I feel God wants me to do more to support organizations on the front line of missions.”This summer, his son and daughter return to an orphanage they visited in Kenya, and Phil will lead a team from his church back to Peru.

With some trepidation, Phil set aside his corporate career in decision analysis, advising bio-tech companies about good investments in new products; he has opened a consulting business since he returned. A graduate of both Westmont and Stanford thanks to the 3-2 engineering program, he completed master’s degrees at Stanford in management science engineering and mechanical engineering.“I grew in my faith at Westmont through thoughtful teaching, the influence of my peers, and my involvement with Potter’s Clay,” he says.“God used that experience to give me a heart for missions.” Europe Semester awoke the excitement of international travel; he took lots of pictures never expecting he could afford to return. But he’s traveled widely ever since for work and short-term missions projects in China, Hong Kong and the Philippines.

A native of Taiwan, Phil’s wife, Sophia, immigrated to the U.S. as a teenager. She homeschools Tim, 16, and Alyssa, 14, and works as a freelance artist. The Beccues live in Westlake Village, Calif., and belong to Trinity Pacific Christian School, a homeschool group with more than 200 families. With some assistance from Phil, Sophia continued teaching as they traveled. She missed the comforts of California (such as toilets that flush and the absence of insects) but embraced rustic locations in countries such as Cambodia, Ecuador, India and Indonesia.

Tim, a promising cellist, takes classes online through a Christian high school so he can focus on his music. But he left his cello behind as he circled the globe, playing with a camera instead. His artistic photographs illustrate his blogs; Phil and Alyssa also posted updates on the road.“Most hotel rooms had Wi-Fi, and four people competed for three devices that connected to the Internet,” Phil says. To read more about the trip, see www.rtw.beccue.com.

Alyssa missed her friends but discovered a new passion in Kenya when the Beccuesvolunteered at the Miracle House orphanage. The children captivated her, and she’s busy raising funds for her return trip.

In addition to completing service projects and schoolwork, the Beccues took time for adventures such as paragliding in Papua New Guinea, riding a camel in Oman, going on safari in Tanzania, and zip lining in Peru.

In China, Phil reconnected with an old friend he’d met 20 years earlier who had accepted Christ. “We developed a great friendship, and I mentored him until the correspondence stopped,” Phil says.“Then his son googled me shortly before our trip, seeking the person who’d given his father a Bible. We were able to visit him and present him with a new, large-print edition.”

Phil says the service projects added richness and depth to their travels. “I’m more convinced than ever that a life of service has its own reward.”