Westmont Magazine The Baron of Breakfast Burritos Rules the DC

Love for Pascual Mamahua’s Dining Commons breakfast burritos may be a unifying factor among Westmont students. These culinary creations are in high demand, as students crave the delicious combination of eggs, cheese, tater tots, and a choice of bacon, ham, chorizo or vegetables expertly wrapped in a warm tortilla. But students appreciate more than just the burritos: They enjoy talking with Pascual himself. While cooking, he converses with students in English or Spanish. Sometimes his customers even bring him a morning cup of coffee from the other side of the DC!

If you happen to be in the DC around 9:50 on a Tuesday or Thursday morning, you’ll likely see a long line of students at the grill, each of them engaged in the deepest mental calculations regarding whether or not they’ll be able to get a burrito and still make it to their 10 a.m. class on time. Students showing up to class five minutes late with a burrito in hand is a fairly common occurrence around campus.

So how did the famous Grill Master arrive at Westmont? Pascual’s brother, Francisco, worked at the college, and Pascual himself joined the DC staff in 1980. He began making breakfast burritos in 1988. While he no longer creates these burritos for himself, he used to enjoy them with tomatoes, bacon, onions, mushrooms and jalapenos. At Westmont, students often opt for simpler options: Pascual says the most popular ingredients are ham and bacon. When he isn’t making burritos or working elsewhere in the DC kitchen, Pascual watches TV, relaxes and hangs out with his nieces, nephews and family.

A Spring Sing skit even celebrated this beloved campus figure! In 2018, the Armington men’s presentation began with the words: “You know him as the Baron of Burritos, Dr. DC, the Emperor of Omelettes. His talents know no end. I am pleased to introduce to you Westmont’s most famed Dining Commons chef: Pasucal!” The skit told the story of what might happen if Pascual left campus (hint: it involves a lot of gruel). After beating Gordon Ramsey in a cooking competition, Pascual finds great success as a famous chef and opens his own restaurant. However, he eventually learns of the plight of the students he left behind, and he realizes that his heart remains with Westmont. Pascual stages a triumphant return to save the students from their dietary doom. The skit won first place, and many seniors fondly remember it as one of their favorites. Pascual says he was surprised to learn about the skit, but it made him happy.

Future generations of Westmont students will be glad to hear that Pascual says he has made no plans to leave Westmont until he retires. The college’s Grill Master will, thankfully, continue to bring students happiness in burrito form.

When asked about the secret of making the perfect breakfast burrito, Pascual replies, “Make them with love.” And he does. 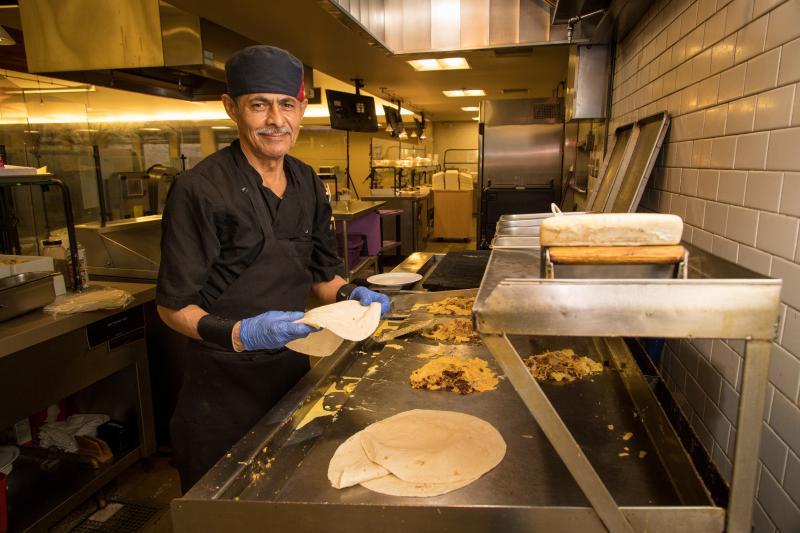