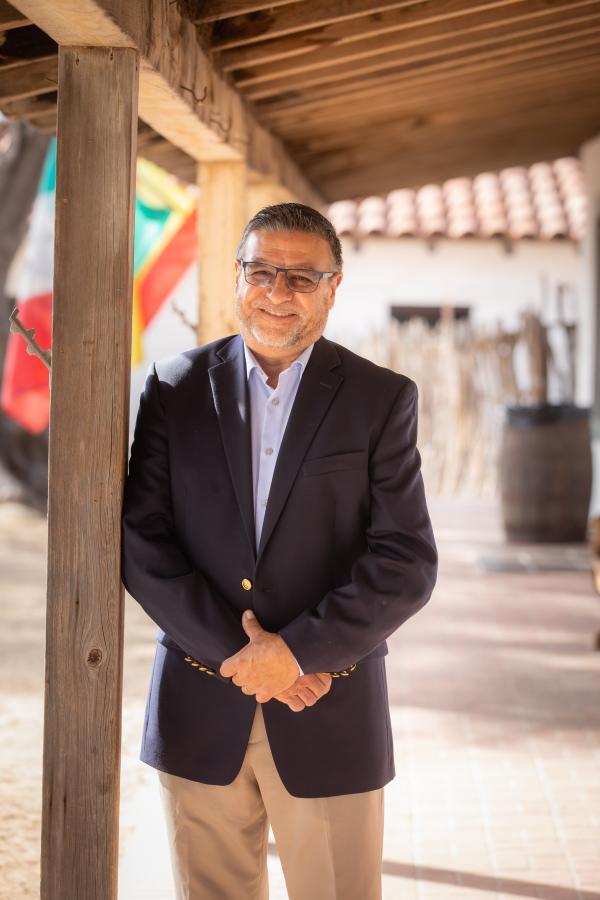 A native Santa Barbaran, he worked for 37 years in the UC Santa Barbara library, where he co-founded and directed the California Ethnic and Multicultural Archives in the Special Research Collections Department. “It was a way to give a voice to the voiceless communities of color in California whose histories had gone unrecognized,” he says. “I got to develop a world-class collection supporting scholarship and research about these communities.”

Güereña began working as a page in the Santa Barbara Public Library when he was 15 through the Summer Youth Employment Program. While taking ethnic studies classes at Santa Barbara City College, he enrolled in a practicum at La Casa de la Raza tutoring Latino immigrant students struggling in school. Within a year, he’d been asked to coordinate the UCSB student-run program, El Centro Educativo. “That was one of my top organizational experiences, communicating with school administrators and immigrant parents while scheduling and supervising the college students and writing all the reports,” he says. “I was carrying out my passion and moving theory into practice.”

He learned selflessness at an early age from his mother, a single parent who raised three children, one with Down syndrome. “She was a godly woman committed to serving the underserved,” he says. “She invited homeless people to eat dinner with us even at Thanksgiving. This profoundly affected me.”

Güereña earned a substantial scholarship from the Hispanic Baptist Churches of the Pacific Southwest to attend Westmont. With his unique circumstances, he lived off campus. “I’m grateful I got a first-class college education while living at home and helping support my family with my part-time job,” he says.

With help from religious studies professor Moises Silva, he co-founded the Minority Student Fellowship Club to create a safe space from implicit racial bias so students of color could support and nurture each other and study the Bible. “Coming from a very poor family, I had a difficult time relating to insensitive, privileged students,” he says. “But I knew the overarching goal was getting a good, solid, Christian education that would propel me forward in life.”

After graduating, he served as a children’s specialist at the Eastside Library on Montecito Street. “I saw a tremendous need and was determined to help improve reading abilities among these minority and Latino students,” he says.

He earned a master’s degree in library and information science from the Univer- sity of Arizona and returned to manage the Eastside Library, overseeing an ethnic services outreach project for the Santa Barbara Public Library before working at UCSB, where he served as the Chicano studies librarian among many other posts.

The academic skills he finessed at Westmont helped him become a prolific writer and publisher in library science, bibliography and archives. His books include: “Latino Librarianship: A Handbook for Professionals,” “Latino Periodicals: A Selection Guide,” “Library Services to Latinos: An Anthology” and “Pathways to Progress: Issues and Advances in Latino Librarianship.”

“Later in life, I met former students who told me they became professionals because these writings inspired them,” he says. “They learned about Latino library services for minorities, ethnic archives and even how to carry out a community analysis and needs assessment.”

Beginning in 2008, he co-founded and later became executive director of United Parents/Padres Unidos, which advocates for equity in education and informs and empowers parents to close the achievement gap. Its classes and workshops for immigrant parents served an estimated 3,000 families and 12,000 children on the Central Coast.

Güereña co-founded the Dos Pueblos High School/Parent Teacher Student Association’s Committee on Equity and Excellence in Education to reduce barriers and increase academic achievement. “We made changes that addressed equity, diversity and inclusion, successfully increasing awareness and promoting a just community that treats all students equally without bias,” he says. Regional school districts later replicated many of the committee’s successes.

The Santa Barbara schools superintendent nominated Güereña to the board of trustees of the Santa Barbara Education Foundation. He served as president and successfully led the campaign for two parcel tax measures in November 2012 to provide $13- $15 million for Santa Barbara Unified primary and secondary schools. “That was one of the highlights of my professional career,” he says. “So was convincing both Democrats and Republicans it was in their best interest to support these initiatives to benefit kids.”

He now serves on the board of directors for the Santa Barbara Trust for Historic Preservation. “Preserving local history has always interested me, and I’ve been helping develop a curriculum to teach elementary school kids about the Presidio and Santa Barbara’s history,” he says. “It’s a way for the community to appreciate our historical buildings and structures and the multiple layers of ethnic history in Santa Barbara.”