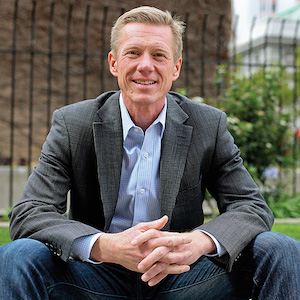 A competitive cyclist, Dan Harvey ’84 knows he needs to stretch before a race and exercise to stay fit. He applies the same strategy to his work in commercial real estate, telling his team to stay nimble to keep on top of changing markets. At Cushman and Wakefield, which provides a myriad real estate services, he leads a San Francisco Technology Team that manages complex leasing transactions worldwide for cloud, mobile, social and big data companies such as Salesforce.com, Uber and CBSi.

For 12 years, Dan has been the exclusive broker for Salesforce.com, handling three large leases that totalled 1.3 million square feet in 2012; the San Francisco Business Times named him Broker of the Year in 2013. He arranged the largest lease in San Francisco history in 2014: 714,000 square feet in Salesforce Tower, still under construction. His career includes 600 transactions valued at more than $6.3 billion.

Dan arrived at Westmont ready to play soccer and study economics and business. Then he took a philosophy class and wanted to change his major. His practical parents prevailed upon him to double major instead. “A philosophy major was the best educational choice I ever made,” he says. “It sparked something inside me I didn’t know was there. Philosophy taught me critical thinking and how to write clearly and argue persuasively, and I use these practical skills all the time. We do a lot of storytelling in our business, and I know what I want to say and why, what the evidence is and how I should conclude.”

Dan tried politics and a start-up before discovering commercial real estate in the Bay Area. He first joined Cushman and Wakefield in 1987. After 10 years, he went to work for REIT Prentiss Properties in Oakland. “The best thing that ever happened was getting into real estate at the beginning of a real estate recession,” he says. “If you can figure out how to make it work in a down market and build good habits and relationships, you can use that to your advantage.”

A job with Jones Lang LaSalle took him to San Francisco, and he started working with tenants during the dot-com boom. “I cut my teeth on the tech side of corporate occupiers until the dot.com went to the dot-bomb,” he says. “My clients had over-leased and over-purchased, and I spent the next few years helping them get out of their commitments, especially overseas.”

He returned to Cushman and Wakefield for a more entrepreneurial environment. “I was taking personal risks and wanted to work with clients also taking risks and freely pursue relationships and business with high-velocity companies disrupting the status quo,” he says. “I thrive in a business environment that values innovation, creativity and change. There is no formula for what we do.”

Dan and his first wife, Liz Harvey ’84, live a mile from each other and raise their two daughters together. Dan’s wife, Leeann, is a child psychologist and competitive open-water swimmer. Liz is a runner, and the three have competed in a mixed-relay triathlon as the Harvey Wives. Dan and Leeann have two children. “It’s not the original play, but all of us have learned to collaborate,” he says.