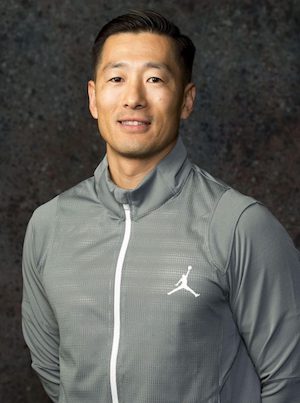 Steve Baik ’00 coached a dream team. His 35-0 Chino Hills boys basketball players captured the 2015 California State Championship and a No. 1 national ranking. As a result, Steve received the Naismith Coach of the Year award from the Atlanta Tipoff Club.

“Three brothers on the team, Lonzo, LaMelo and LiAngelo Ball, developed innate chemistry from playing together for years,” Steve says. “It’s rare for three brothers to play the same sport at the same time, and it created a special relationship on the court few schools can achieve. The brothers deserve a lot of credit, as do the other two starters, who worked with them seamlessly.” Lonzo now plays for UCLA, and his brothers have also committed to the Bruins.

Steve played high school basketball himself and decided then to become a coach. He also wanted to play in college, and his coach told him about Westmont, a Christian school near the beach. That combination appealed to him, and when Coach John Moore offered him a basketball scholarship, he accepted. He played for four years, helping the Warriors to the Final Four in 2000.

“Coach Moore reminded me to seek the Lord first, and that encouragement and challenge, along with the nurturing community, made a difference in my life,” he says. Steve majored in kinesiology and earned a teaching credential after he graduated.

He returned to his alma mater, Arcadia High School, and spent four years coaching basketball there. He became the head coach at Chino Hills in 2007 and also taught health and physical education.

“I believe in using basketball as a tool to help players become better people, better students and better athletes,” he says. “I love working with kids who are passionate about the sport and willing to develop the skills they need to succeed. Developing the person is the biggest thing. Student athletes will be the best basketball players and students when they are the best people. I encourage them to build character, be a positive member of their family, take care of business in the classroom, and be responsible off the court. That’s more important than just winning games.”

Despite the successful season, Steve resigned from Chino Hills at the end of the year. “I wanted to be home more and spend more time with my wife and our two sons, 5 and 1,” he says. He was tired of the long commute. He turned down an immediate coaching offer thinking he would teach. But as he prayed about it, he realized God was giving him this opportunity. He has become the boys basketball coach at Fairfax High School in Los Angeles, an urban school much closer to his home in Altadena than the suburban Chino Hills.

Steve has embraced the challenge of working with a different student population. “Coaching basketball allows me to make a greater impact in players’ lives,” he says. “Building relationships through the commonality of a sport is a wonderful process. This new position has reaffirmed my interest in teaching and coaching.” The Lions started the season 10-1 as Steve seeks to develop players with character who overachieve as athletes and students.