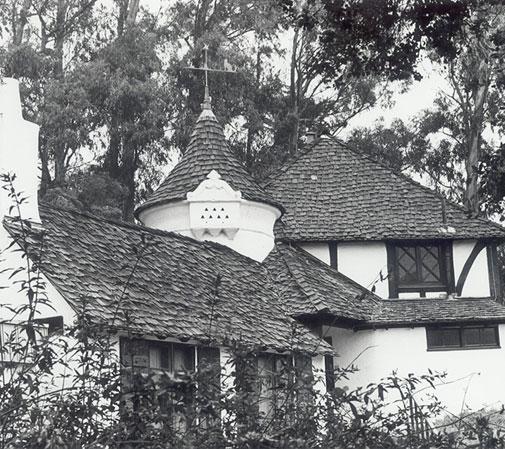 For nearly 80 years, Bauder Hall brought a bit of Normandy to La Paz Road. Built in 1929 in a medieval style reminiscent of the French countryside, it served as a carriage house for the 17-acre La Paz estate. A lot split in 1930 left Bauder and the mansion (which later became Catherwood Hall) on a four-acre parcel that Westmont purchased in 1945 for $55,000. Neither structure survives: Catherwood burned in the 1964 Coyote Fire, and the Tea Fire took Bauder 44 years later.

The original building contained a garage for four cars, a five-ton tower hay loft, two box stalls, a tack room and a lavatory. An extensive remodel before 1945 added a full second story.

With housing in short supply, Westmont immediately turned the building into a dormitory where 18-20 men lived. For 15 years it was known simply as Lower Dorm. In 1960, students asked to name it after George Bauder, a well-loved house parent and professor. He taught speech and sociology briefly from 1956-1957 and lived in Lower Dorm until he became too ill to work. He died in 1958. Previously, he taught at Beaverton High School in Oregon, served as director of counseling services at Western Baptist Seminary and worked on the staff of Inter-Varsity Christian Fellowship.

“He was able to make a person feel worthwhile and appreciated and respected,” recalls Merle Hume Blondino ’56, who knew Bauder before he arrived at Westmont. “He never talked down to students. His keen interest in psychology was infectious.”

Students dedicated the 1958 year book to Bauder, describing him as “a teacher whose classroom was the world, and his students anyone in need . . . He taught us wisdom of the heart, and his purpose was that we know ourselves. His method was informal and warm, and his probing questions caused us all to think, and then to pray. Through his life we have seen love, and through his eyes we have seen understanding and compassion; through his prayer we have learned patience.”

In 1967 Bauder Hall became the offices, classrooms and labs of the psychology department. For a time, professors used one of the rooms on the second floor as a sleep laboratory, where male students volunteered for experiments on sleep.

When the November 2008 Tea Fire consumed Bauder, the psychology department moved into temporary facilities near Reynolds Hall until their permanent home, Winter Hall for Science and Mathematics, opens its doors in the fall of 2010.

Former residents of the building miss its distinctive and charming characteristics such as the diamond-shaped window panes. The weather vane atop the circular tower provided an example of the art of weathervaning with its whimsical cat.

“I will miss being able to look out of my windows on the second floor over the Clark buildings to the ocean — and sitting at the work table that I built,” says Brenda Smith, professor of psychology, who had an office in Bauder for more than 20 years. “I miss running up and down the stairs in the building and examining the carriage lamp that hung in the stairwell.”

While she will miss Bauder, Smith looks forward to the completion of Winter Hall. “We’ll have better classroom and lab facilities, more storage, more interaction with other departments and students in the building and enjoy a much more central location,” she says.

At this time, the college has no plans to rebuild Bauder Hall, focusing instead on the new buildings currently under construction.