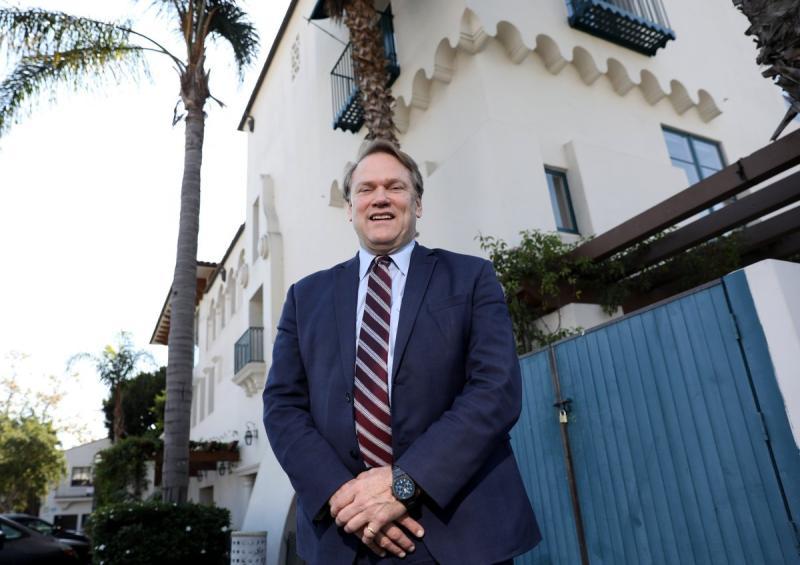 This article appeared in the October 29 issue of the Santa Barbara Independent newspaper. Republished with permission.

It's way too soon to predict what kind of fire just got lit, but Westmont College's purchase of the four-story office building at 26 West Anapamu Street in downtown Santa Barbara could provide a much­-needed spark for the city's Central Business District (CBD), increasingly a collection of electrons with no clear nucleus to spin around. At least that's the hope of Tom Parker, chief executive of the Hutton Parker Foundation - the philanthropic nonprofit that just sold the building to Westmont. ‘To have the college downtown is part of what this city needs to keep downtown alive and vibrant,” said Parker.

The Westmont deal is one of several others Parker and the foundation are currently working on to get a stronger higher ed presence downtown. Before the onslaught of COVID, Parker had been in active talks with Cal State Channel Islands, for example, to launch a State Street satellite. He was in discussion with UCSB to bring its much-vaunted biosphere project downtown, as well. And for years now, the Hutton Parker Foundation has been landlord to Antioch University’s downtown annex in the Anacota Building by Anacapa and Cota streets.

At a time when there’s an abundance of ad hoc subcommittees, working groups, and a massive outpouring of architectural creativity all seeking to reengineer the DNA of the city’s CBD, the Westmont deal qualifies as actual meat on the bone for the higher ed strategy. For the last four years, Westmont has quietly rented the third floor of the Anapamu Street property, sharing space with the Community Environmental Council (CEC) - the environmental policy think tank that sprang up in the wake of Santa Barbara’s 1969 oil spill - as well as the Fund for Santa Barbara, the progressive-minded nonprofit known for funding social-justice and grassroots organizations. Parker said he’s got plans for relocating those two organizations, perhaps in another property he owns at 1219 State Street.

Westmont will be taking possession of the property early next year, but with COVID still very much a concern, it’s uncertain when new programs and classes can kick into gear at what the private college calls Westmont Downtown. Westmont President Gayle Beebe said the groundbreaking for the new building is scheduled for next August.

Parker, famous among other things for being the son of a Milpas Street butcher, is a onetime teacher turned real estate wheeler­dealer who wound up later in life as an ebulliently creative mover and shaker in the world of philanthropy. He and the foundation are leveraging the small but very significant real estate empire they’ve amassed over the years to provide stable and affordable space for crucial players in Santa Barbara’s sprawling constellation of nonprofits. The foundation currently owns 15 properties, providing space to 60 nonprofits and one for-profit entity.

For Parker, the sale to Westmont was unusual in the extreme. “We never sell,” he said. “That’s not what we do.”

In this case, however, Parker made an exception. And according to Westmont’s Beebe, Parker did even more than that. “Tom has been an amazing partner here, helping us dream our vision in engaging with downtown businesses and organizations and some of the challenges we face as a community.”

Parker believes higher education ventures like Westmont - a faith­based liberal arts college located in the lush former grounds of Dwight Murphy’s estate in Montecito - will bring some serious synergistic juice to State Street. Even before COVID, downtown storefronts were going dark in such alarming numbers that City Hall was threatening to regulate the posting of “for lease” signs. Candidates running for office talked of fining landlords for allowing their properties to remain vacant too long. (Such talk evaporated quickly upon election.) Experts pointed out that State Street’s retail inventory is too big by fully one third. Throw in high rents, regulatory red tape, dirty sidewalks, mentally ill street people, and a downtown mall abandoned by its two anchors, and it’s not a pretty picture.

Stepping into the void have been ventures like Amazon’s downtown offices, home to a high-paid, high-tech workforce all figuring out new questions Alexa, the company’s robotic wunder-droid, can answer. Into this swirl of shifting realities, Parker is hoping that an infusion of smart and motivated students, faculty, and staff can make an economic, educational, and cultural contribution.

That hope is shared by Westmont’s Beebe, no slouch when it comes to visionary ebullience either. Ever since coming here four years ago, he said, “I’ve been hearing people say they want to see more Westmont students downtown.”

Beebe’s long been eager for Westmont to expand its downtown presence for a host of reasons, including expanding the college’s educational opportunities in the field of high tech and high finance. In addition, he said, he expects the downtown campus to help anchor the school’s budding program in global health. Currently, Westmont offers students a summer in Uganda for health-related programs.

Westmont students have long been involved with Doctors Without Walls, a group of medical professionals that provides street medicine to the South Coast’s homeless people. Typically, Westmont students play a significant role for the Point in Time counts in which local government agencies and social service providers conduct a countywide census of the homeless people in Santa Barbara.

Beebe is quick to acknowledge that the downtown campus remains a work in progress. The school, he said, will have a better idea sometime in 2021. He is convinced, however, that the existence of the new campus will be invigorating in the extreme. “Once you get into new spaces, they make you start thinking about things you never thought of before,” he said. “It encourages creative risk-taking.”

There are also more immediate and practical considerations. Westmont is strictly limited in how many students are allowed to attend classes at its Montecito campus. Based on a conditional-use permit - 50 pages long and with 130 specific conditions - Westmont can have no more than 1,200 students on the Montecito campus. Currently, the school has about 1,340 students, Beebe said. Westmont has programs in San Francisco, Europe, Turkey, Egypt, Uganda, Australia, India, England, Australia, and Mexico. But the downtown branch, he said, will have probably 100 students. That is a big bite of the campus’s excess.

Parker is meanwhile working with Cal State Channel Islands to locate programs at his property at 1219 State Street. That, he acknowledged, remains up in the air because of the seismic standards for state colleges. If that doesn’t work out, he suggested that property might be an ideal location for the Fund for Santa Barbara and the CEC, offering the latter a much more public-facing portal to make the case for expanded solar energy. Likewise, there’s been talk about renting space to Cal State Channel Islands - headquartered in Camarillo at the site of that city’s former psychiatric hospital - on Cota Street in the Lyons buildings, a multistory former storage facility now used for many educational purposes.

Parker, a former real estate developer who controlled high rises throughout Southern California, said he enjoys being unshackled from the profit motive when charting the course of his real estate decision making. “I just work with the nonprofits,” he said. “And I don’t have to worry about the profit incentive. We’re here to try to help the community.”

When approaching a deal, Parker said, “You do your best to make sure everybody wins. You have to give up more than you want to, maybe. You have to work a little harder, certainly, but everyone wins.” After a brief pause, he added, “If everyone doesn’t win, then we all lose.”