Despite her death, the former vice president for student life continues to shape education at Westmont

Before she died Sept. 5 of ALS or Lou Gehrig’s disease, Jane Hideko Higa shared the struggle of living with a merciless disease. “Life is hard,” she said. “But God is at work even when we cannot understand or sense His presence—when there is darkness all around us.” She planned her memorial service and titled it, “From Struggle to Hope and a New Creation.” 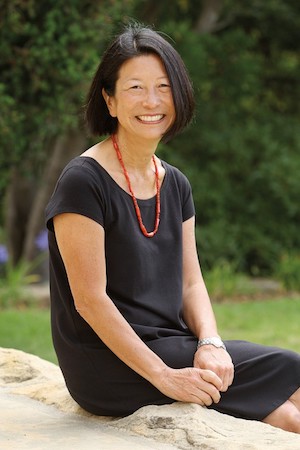 Jane turned 63 just weeks before her death. The longest serving vice president in college history, she retired a year ago after leading Westmont’s student life program for 24 years.

“Jane’s work at Westmont and in the national student life community lives on through the people she has mentored and inspired and the generations of students she has lovingly guided,” says President Gayle D. Beebe. “I greatly admire the way she brought faculty and student life staff together to connect Westmont’s curricular and co-curricular programs—she profoundly shaped the educational experience we offer students. In addition to being an effective and wise administrator, Jane was a gracious, hospitable person. We will never forget her.”

In 2013, Beebe announced the creation of the Jane Higa Academic and Co-Curricular Partnership Award for those who continue the productive relationship between faculty and student life staff Jane cultivated over the years. Tim Wilson, who worked closely with Jane in his position as associate dean of students, and his wife, Jane Wilson, associate professor of education, were the first recipients.

After graduating from Westmont in 1973 with a degree in social science, Jane earned a Master of Science in education with a major in college student personnel services from the University of Southern California. She served for seven years as dean for student affairs and two years as dean of women at Biola University before joining the Westmont staff in 1989 as vice president for student life and dean of students.

Jane led the discussion on diversity, including the initiative in the college’s 1995 long-range plan. She served on the Diversity Committee and gently guided Intercultural Programs, reaching out to students of color and international, missionary and third-culture students. Committed to the “thoughtful and intentional study of and interaction with multiple cultures,” she encouraged the Westmont community to celebrate diversity as an aspect of God’s creation. Student diversity increased from 15 to 29 percent in the past 12 years, and Jane’s desire to make Westmont a safe place and home and for all students has played a key role in that success.

While she set broad policies for student life at Westmont, Jane also worked with students one-on-one, making time to mentor those who sought her out.

Jane’s student life work and involvement with the Association for Christians in Student Development (ACSD) earned national acclaim, and she received ACSD’s prestigious Don L. Boender Award in 1998. She served on the ACSD executive committee as both vice president and president-elect, spoke at numerous conferences, chaired the planning team for the annual conference and served as chair of the diversity task force. In 2011, ACSD honored her with its first Jane Hideko Higa Multicultural Advancement Award, which recognizes individuals doing excellent work in advancing multicultural competency.

Jane also worked with the Council of Christian Colleges and Universities as former chair of the Commission of Chief Student Development Officers and as a member of the Racial Harmony Commission.

Jane is survived by her two children, Josh Higa ’03 and Emiko Corey ’06, and Emiko’s husband, Aaron, as well as her husband, Jim Mannoia, who taught philosophy at Westmont for 15 years before serving as vice president for academic affairs at Houghton College and president of Greenville College. Josh and Emiko remember her as a loving mother and avid baker. Jane’s first husband, Paul Higa, died in 2006.