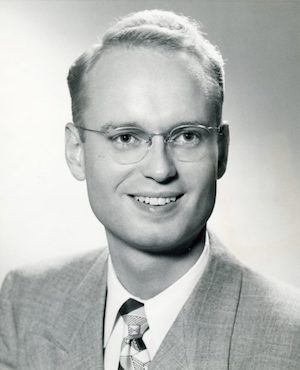 Charles Ryrie, longtime professor at Dallas Theological Seminary, prolific author and editor of the popular Ryrie Study Bible, died in 2016 at age 90. He began his teaching career at Westmont, where he worked from 1948-1951. John Sider, professor emeritus of English, spoke with Ryrie by phone in 2009 to learn about his experience at the college.

Ryrie was finishing his seminary degree when the dean’s office called Dallas looking for a Bible teacher. Asked if he were interested, Ryrie said yes. Dean Paton Yoder hired him without an interview or even a phone conversation. Ryrie agreed to teach mathematics—his college major—but Westmont hired a mathematician before he arrived.

“I had no formal teaching experience except for one’s Christian service during seminary days,” he said. “Everything was brand new.” His biggest challenge as a Greek and Bible instructor was “keeping one class ahead of the class.

“I was very impressed with the Bible department,” he said. “Richard Cramer was chairman, I think, and he really took me under his wing and helped me get the courses organized . . . helping me to prepare and answering questions and just keeping in touch. Dr. Page was like a hero to many people, and deservedly so. Marchant King—and Grace King—were so knowledgeable, both of them, biblically knowledgeable.”

Ryrie worked under two presidents: James Forrester and Roger Voskuyl. When Forrester resigned due to disagreements with the board, many professors left with him. As a young faculty member, Ryrie tried to stay neutral on the controversy, and he remained at the college. “I was just glad to be able to have a chance to teach. I wasn’t ready to give it up at all.”

Ryrie didn’t know Forrester well, but he spoke highly of Voskuyl’s integrity and openness. “He was interested spiritually in things on the campus—not that I had any special place, but his door was always open, and I remember a number of good private conversations with him. Mrs. Voskuyl had a weekly Bible class in their home, which I taught for some time. He was a gentleman, and she was a lady.”

Lack of space meant that Ryrie shared an office with several of his colleagues, so he got to know them well. He recalled Kenneth Monroe praying first thing in the morning. “He would always say, ‘Lord, thank you for something to do today.’ He made an impression on me. I wanted to say, ‘Lord, I’ve got too much to do.’”

Ryrie served as dean of men for a year, taking on extra duty. He spent time with the Westmont Quartet as well, driving with them to performances. “I was available, and I traveled with them on a weekend often, including Dave Hubbard,” he said. “Dave was a senior . . . and a very intelligent man . . . and we had some very good conversations.”

Ryrie remembered the late Lyle Hillegas, a former Westmont president and professor, mostly as a seminary student, but he signed off on Hillegas’s dissertation, a history of Westmont, as a second reader. Hillegas and three other friends got to know Ryrie well at Dallas and gave him a New Testament they all signed, which Ryrie still owned in 2009.