Westmont Magazine Coaching Students to Enroll and Succeed in College

Lucky Arvizo ’89 gets out of his office as much as he can. The co-principal of San Luis High School in Yuma, Arizona, he connects with students, consults with teachers and visits classes. He meets monthly with student leaders to hear their perspectives. When the undefeated boys soccer squad advanced to the state championship game this year, he delivered a pep talk and watched on the sidelines. San Luis narrowly lost to a much bigger school. “It’s important for principals to have relationships with students,” Lucky says.

An enthusiastic and tireless proponent of higher education, he encourages many of his students to complete the Free Application for Federal Student Aid (FAFSA). As a result, 79 percent of them enroll in college, one of the best rates in Arizona. In addition, 93.4 percent of San Luis’ students graduate from
high school; the dropout rate is less than 1 percent. Lucky also promotes enlisting in the military or completing one of 17 certification programs in technical education.

By a unanimous vote, Lucky serves as the planning principal of Somerton High School, which opens in 2023 in the town where his father was born. He has been intricately involved in developing the physical layout and the curriculum, seeking a beautiful design that works well with the school routine and keeps students safe. “It’s an awesome experience,” he says. “I’ve never done it before. I’m listening to all the experts, such as librarians, science teachers and nurses as we plan science labs, a nursing facility, the media center and the library. I’m meeting with contractors and architects. It’s a team effort.”

The Yuma High School Student Athlete of the Year in 1985, Lucky lettered in football, basketball and baseball. One of Yuma’s best right-handed pitchers, he also broke the single-season passing record. He’s been inducted into the school’s Athletic Hall of Fame.

Lucky continued playing baseball and football at Arizona Western College. Then John Kirkgard, the baseball coach at Westmont, heard about him and invited him to campus. “I’d never gone beyond San Diego before,” Lucky says. “All I knew about Santa Barbara was the soap opera.”

Lucky pitched a bullpen for Kirkgard, who offered him a baseball scholarship. “Spending two years at Westmont was a big highlight in my life,” Lucky says. “It was an incredible experience going from a small town in Arizona to Santa Barbara, and I grew as an individual. God always has a plan. Westmont gave me skills and confidence to move forward and give back to the community.”

Professor Roy Millender saw potential in Lucky, who majored in economics and business. “He told me I had the ability to succeed,” Lucky says. After graduating, Lucky worked for New York Life for 10 years in Yuma and Tucson. In 1995, he married Claudia, his best friend in high school, who now runs the intensive care unit at Yuma Regional Medical Center.

Meanwhile, he volunteered to coach football. “I began to realize how much I enjoyed coaching and how passionate I felt about teaching youth, passing on knowledge, and helping them succeed in life,” he says. He went back to school to earn a teaching credential and began coaching full time in 1998.

Lucky spent 17 years as head coach of the Cibola High School football team in Yuma and also worked as a teacher and administrator. All three of his sons played for him. He compiled a 96-82 record, took the team to the state playoffs eight times and won 12 Yuma Union School District titles, including nine in his last 10 years. 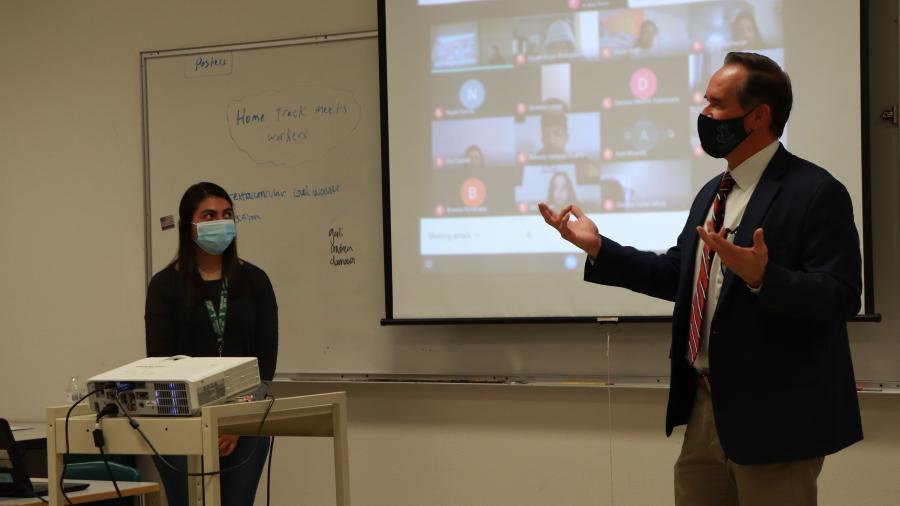 “I see coaching as much more than wins and losses—I’m molding youth and student athletes with character attributes that will help them later in life,” he says. He encourages players to develop discipline to do the right thing when no one is looking. He tells them to expect adversity and challenges and that how they react defines them. Keep trying, he says, and don’t be afraid to fail.

Lucky repeats these messages as a principal. “I pass on my experiences to new teachers so they understand the importance of what they’re doing,” he says. “We have a lot of first-generation students from migrant families, and we want to provide the best education and opportunities for them. The great reward is helping not only the students but the families as well. Seeing students filling out FAFSA forms and applying to college brings me great joy.

“We take our mission seriously: being committed to excellence and challenging students to think and learn for themselves,” he says. “I enjoy what I do and have a passion for giving back to the community and helping others.”