Westmont graduates one of its largest classes, honors outstanding students and welcomes the golden warriors of the class of 1964 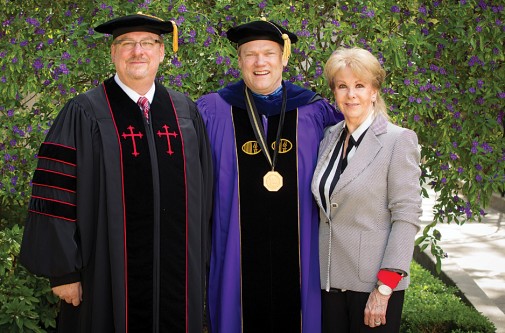 Hats, fans and iced drinks kept guests cool at Commencement on a warm May day when 367 students walked across the stage to receive their degrees.

Pastor Rick Warren, who wrote “The Purpose-Driven Life,” spoke to the graduates and received an honorary doctorate. He said God will ask them two important questions: “What did you do with my son, Jesus Christ? That’s the salvation question. What did you do with what I gave you? That’s the stewardship question.” Lay down three things before God, Warren advised: your identity, your influence and your income so God can make them come alive and accomplish great things.

President Gayle D. Beebe described the class of 2014 as one of the brightest ever. “We want you to learn, grow, understand life and follow Jesus Christ,” he said. “I encourage you to persevere no matter what life brings.”

Beebe gave the Westmont Medal to Montecito neighbor Annette Simmons and her late husband, Harold, who died in 2013. “My husband would be so pleased,” she said. “He loved Westmont.”

Biology major Kiera Kauffman and engineering physics major Luke Patterson earned the Faculty Scholarship Award with the highest cumulative grade point average: 4.0. “The academics are so good, and I learned so much, especially doing research with biology professor Amanda Sparkman,” Kaufman said. She hopes to study ecology in graduate school.

“I wasn’t going to attend Westmont, but I felt like God called me here,” Patterson said. “I didn’t realize how much college can change your life— Westmont changed mine.” He will pursue a doctorate in mechanical engi-neering at UC Santa Barbara.

Alison Hensley and C.J. Miller earned the Dean’s Award as outstanding scholar-athletes. She plans to complete a master’s degree in education and a teaching credential at UC Irvine. Miller may play professional basketball in Europe or become a physical therapist.

Paige Harris accepted the Dave Dolan Award for raising awareness of social and spiritual needs through her leadership of Urban Initiative. She also earned a teaching credential.

Myvy Ngo and Matthew Bennett received the Kenneth Monroe Award for superior academic achievement and excellence as leaders. “When I came to Westmont, I expected to focus on academics, but the people have been the best part of my experience,” Ngo said. She will apply to medical school. 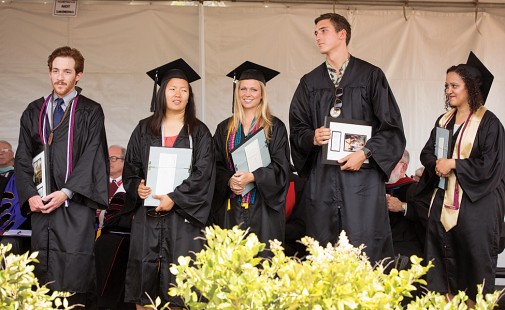 “You can learn from anyone because Westmont fosters a community of learning,” Bennett said. He is considering graduate study in theology.

The class of 1964 celebrated their 50th reunion and marched in the procession wearing academic robes and their Golden Warrior medals.

Physics professor Ken Kihlstrom spoke at Baccalaureate about his wife, Kim, a computer science professor who died in December. He baked hundreds of her famous chocolate-chip cookies and passed them out to the graduates.