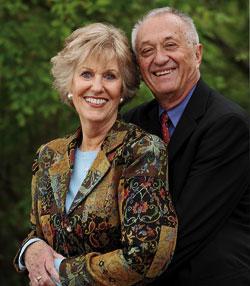 Newly married Don ‘60 and Caryl Taylor ‘64 Goehner both became charter members of the Wallace Emerson Society by making a provision for Westmont in their estates.

Few people are more connected to Westmont than Don Goehner ’60. A trustee since 1986, he is a graduate, a former college staff member, the father of two alumni and the grandfather of an incoming student.

“Westmont has changed dramatically in 50 years and all for the better,” he says. “I’m so impressed by the high caliber of the trustees, faculty and staff. The college is on the cutting edge of Christian liberal arts education, unapologetically Christian and not afraid to ask the tough questions.”

Don is especially proud of Westmont’s global emphasis and enjoys telling the story of a Christian leader who travels extensively in the developing world. “He said everywhere he goes, whenever he meets a true leader, that person invariably turns out to be a Westmont graduate,” Don says. “That’s a great illustration of Westmont’s reach.”

After two years at a junior college, Don transferred to Westmont as a married student. He majored in sociology and worked for Youth for Christ for 14 years before becoming a fundraiser at Azusa Pacific. He then joined the staff at Westmont and directed the college’s first capital campaign. In 1990, he formed The Goehner Group in San Jose, Calif., which provides consulting services in fundraising, management and executive searches.

Don’s daughter Terri is the office man-ager at The Goehner Group, and Todd ’85 works with the homeless in Ventura. Trina Hudson ’87 (mother of Keaton ’14) works for MedBridge in Santa Barbara. In 2006, Don’s wife, Bev, died suddenly, and he found himself in shock and immersed in grief. He has written a book about this difficult experience, “My Journey to Hope,” which he is publishing himself to help others deal with the death of a spouse.

A fellow trustee gave Don good advice, which he followed: Don’t start a new relationship until you learn to like being single. In May, Don married Caryl Taylor Goehner ’64. They weren’t students together but met later in life as fellow alumni living in the Bay Area. Don appreciates Caryl’s sensitivity and support as he worked through his grief.

The newlyweds share a heartfelt commitment to the college. “Westmont took a risk by accepting me as a student, and it changed my life,” Don says. “I am who I am today because of my relationship with Westmont.”