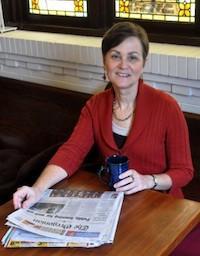 When Pastor Carley Friesen ’76 helped Mt. Tabor Presbyterian Church create a coffee house in an unused fellowship hall, she didn’t write a business plan. “Instead, we decided to open an amazing space and see what the community wanted to develop there,” she says.

Neighbors in the Southeast Portland, Ore., locale envisioned the lovely old room with its brick walls, stained-glass windows and high-beamed ceiling as a place to gather. TaborSpaceopened for coffee, conversation and activities such as yoga and concerts in June 2009 with an all-volunteer staff. “It’s the first time I’ve seen the church and the community rub shoulders on a regular basis,” Carley says. Today the coffee house employs a full-time manager, four part-time workers and many volunteer baristas. Customers from the neighborhood donate what they wish for coffee and pastries, and TaborSpace produces revenue. “It’s a way to keep the building open as a community space that also includes a congregation,” she says.

“I come from a Mennonite background, and I’m oriented around building the Kingdom of God,” Carley says. “Jesus calls us to bring people together into relationships. What we’re doing at TaborSpace doesn’t look like church as we’ve known it, but it keeps Jesus’ work in the world alive and healthy.”

Carley leads a worship service Sunday morning in the coffee house. Instead of preaching, she engages participants in discussion. “We sing spirituals and old gospel songs,” she says. “A lot of contemporary Christian music is listening, and it’s been beautiful to hear this group find their voice and sing.”

The idea for TaborSpace sprang from Carley’s experience at Westmont. One of 20 students sent out for summer missions, she worked in a coffee house in Amsterdam. “I spent my time conversing and making connections,” she says. “I learned how valuable it is to sit down and talk to people.”

Carley majored in religious studies because she most appreciated those classes. “Westmont helped empower me to do something bigger and broader,” she says. “I had opportunities for leadership and learned by doing and figuring out things for myself. In a changing world, that’s what we have to do.”

She first thought about seminary when guys from her dorm encouraged her to join them at Fuller Theological Seminary. She earned a Master of Divinity degree in 1979 and taught biblical studies at Tabor College in Kansas for a year. A similar position opened up at Fresno Pacific, and she spent five years there teaching and advising student ministries. “The Mennonite Brethren didn’t allow women to do pastoral ministry, so I decided not to keep teaching what I couldn’t do,” she says. Eventually she was ordained in the Presbyterian Church USA. “I didn’t want being a woman to become the focus of my ministry,” she says. “I wanted to do ministry, not change the world for women.”

Carley has often served as an interim pastor, helping churches chart their path. “It’s exciting when congregations have to make decisions,” she says. “I like to brainstorm with them and think beyond traditional approaches.” She’s stayed at Mt. Tabor 10 years and thinks she still has work with its elderly congregation. “But I’m open to what comes next,” she says. “You have to live the life that comes to you, and I want to make the world a better place for all people.”