General Michael Hayden, an expert on domestic and foreign affairs and a retired director of the Central Intelligence Agency andNational Security Agency, offered his personal lens to view our complex and dangerous world at the 13th annual Westmont President’s Breakfast February 9 at Fess Parker’s DoubleTree Resort. The crowd of about 625 guests included dozens of local emergency and government officials who received a standing ovation when President Gayle D. Beebe recognized them. A brief video focused on Professor Tom Walters and his experience evacuating from the Montecito mudslide with his wife and young daughters.Hayden, a retired four-star Air Force general who was the nation’s highest-ranking military intelligence officer, said how encouraging the local community has been in the wake of the tragedy. “I’m the intel guy,” he said. “I never bring good news. I have nothing uplifting. I’m the guy who leaves you worried at the end of the presentation, and I promise to not disappoint.”

He started by outlining a way of thinking about all the data that constantly barrages us. “As bad as the world seems right now, most of the people in this room have lived in a more dangerous time,” he said. “But we’ve never seen it more complicated and more immediate.”

He calls 2017 the year of disruption with the United States shocking its foreign partners by markedly changing direction in its policies and beliefs, such as the North American Free Trade Agreement, Trans-Pacific Partnership, Paris climate agreement and the Iran nuclear deal. “Vote however you want, but that’s a lot in the first 12 months of the administration, and we’re not done,” he said. He also mentioned the president’s lack of support for NATO’s Article 5, moving the U.S. embassy in Israel to Jerusalem and the Muslim travel ban. “That’s a different image of America than ‘give us your poor, your tired, your huddled masses,’” he said.

Additional disruptions include changes in foreign policy strategy in Syria and North Korea, supplying arms to the Ukrainians and the defeat of the Islamic State at the capital of Raqqa.

He identified one of those fuses as North Korean leader Kim Jong Un. “He is a bad man, but he’s not crazy,” he said. “He is coldly rational, and what the North Koreans are doing is exactly what a logical actor would do in his circumstances. He would be crazy if he were to give up his nuclear weapons because they are the only thing that guarantees the survival of not just his government but of him and his family.”

Hayden noted that both Saddam Hussein and Muammar Gaddafi lacked nuclear weapons and were killed by U.S. forces. “And the short subject in between was called the Ukraine,” he said, “who, you’ll remember, gave their nuclear weapons back to the Russians in the 1990s in return for territory guarantees in perpetuity. He (Jong Un) sees what happens when you don’t have this stuff. He’s never going to give that up. The problem is that our president says he’s got to.”

Another fuse, according to Hayden, is Iran, which has dismantled most of its nuclear program for the lifting of sanctions as part of the Iran nuclear deal. “President Trump seems the most enthusiastic about foreign policy when he can undo something his predecessor did,” he said.

Hayden added other concerns about Iran, including an aggressive expansion into the territories of Iraq, Syria and Lebanon. “The American success in defeating ISIS has created circumstances for the Iranians to come in behind us and expand their control of those areas,” he said.

He shared some positive news about terrorism. Hayden explained we’re relatively safe, stressing the limits in the amount of damage terrorists can inflict as well as the limits to the intelligence community’s ability to prevent an attack.

Finally, Hayden examined Vladimir Putin and Russia, defining the country as a revanchist rather than a resurgent power. He downplayed their importance (Russia’s gross domestic product is half the size of California’s), while noting their nuclear arsenal.

An expert on cybersecurity, Hayden examined Putin’s motives and the steps taken to interfere with the U.S. presidential election, including the stolen emails from the Democratic National Convention sent to WikiLeaks and other sources then used by Russian bots and computer farms to push the messaging to social media and the news.

He discussed more recent American social media trends, highlighting a period when #releasethememo was by far the most popular topic. “That gets picked up by the alt-right media in this country,” he said. “There is an amazing parallel to the Russian bot nets and the alt-right media. It’s on display, then Sean Hannity picks it up for his broadcast, the most popular show on cable news, and then it gets picked up by “FOX and Friends” the next morning, and guess who tweets that everyone should believe it? That’s the Russian influence.”

U.S. officials have not been able to agree that the Russians are messing with the nation in a way that disrupts American democracy. “If you don’t believe me, channel surf tonight FOX, CNN and MSNBC, and you’ll get it,” he said.

Hayden reminded the audience that former FBI Director Robert Mueller will release his report on the Special Counsel Investigation this year. “No matter what director Mueller determines, it will be explosive,” Hayden said. “No matter which way he goes, how big, how small, how against, how for, it will be an explosive item inside America.” 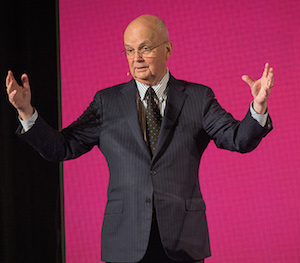 After the breakfast, Hayden traveled to Westmont to answer questions from a panelist of four students during Convocation: Kennedy Mahdavi ’18 (psychology/neuroscience major), Matthew Coffman ’19 (mathematics and computer science double major), Jenna Catalon ’18 (English and political science double major) and Hugh Grant-Chapman ’18 (political science major). They read Hayden’s book, “Playing to the Edge: American Intelligence in the Age of Terror,” and worked with computer science professor Don Patterson to prepare for their time with Hayden.

Some of their questions focused on cybersecurity. In 1997, Hayden was reassigned as commander of the Air Intelligence Agency in San Antonio, Texas. At the time, the Air Force was at the cutting edge of thinking about cyberspace. He quickly grasped that cyber was a domain just like land, air, sea and space—a place where the U.S. will fight.

“This domain was so awesome, so convenient, so powerful, so immediate, and had such great scale that we began to take things we used to keep down here in our pockets, wallets, desk drawers or safe and begin to put them up here. It was the golden age of espionage.” This transfer to cyberspace has created massive vulnerabilities for society that still require a great deal of work to resolve.

Hayden described cyberspace as a global commons and not just a theatre of conflict. That raises ethical challenges and illustrates the difficulty of determining what national sovereignty means there. A thief who steals corporate or government data usually stores it on a server in another country or place, making it difficult to retrieve. “Does a server in Malaysia enjoy as much Malaysian sovereignty as the building in which the server is located?” Hayden asked. The server is a physical thing in a physical place, but the data exists in a place with no national boundaries. “We haven’t figured that out yet. We don’t know what norms apply in the cyber realm. I’m not sure national governments are the ones to answer the question. The owner of Facebook may have more to do with the 21st century definition of reasonable privacy by what he chooses to put into settings or not put into settings.”

When asked about the line between legitimate espionage and invasion of privacy, Hayden said, “It’s complicated; it moves. This is not a debate between the forces of light and the forces of darkness; this is not good versus evil; this is not freedom versus security or privacy versus safety. This should be a mature conversation amongst a free people as to how they balance things they would prefer to have in full measure but they can’t.”

Hayden said that the United States, unlike other democracies, makes oversight of its intelligence services a team sport. “Congress is involved, the courts are involved. That really doesn’t exist elsewhere. We’ve spread oversight amongst all three branches. We need to be careful as a people as we strengthen the authority of the executive even in times of danger because these are not personalized authorities; these are abilities and authorities we are giving to the office.”

Hayden opposed asking Apple to break into the iPhone of a terrorist who attacked and killed people in San Bernardino. Apple’s Tim Cook responded that the company doesn’t do that and actually can’t because they didn’t build a back door into the system. While he considered the FBI’s request to get into the phone legitimate, Hayden thought the security risk too great. “If Apple creates a hole in that operating system, there is now a hole in every operating system of that phone, and I’m coming through it and so will our adversaries. There is no way you can argue that Cook can create a hole in the system and that doesn’t make the system more vulnerable than it used to be.”

At CIA headquarters, the agency identifies itself as the nation’s first line of defense. “We accomplish what others cannot accomplish; we go where others cannot go,” Hayden said. “An awful lot of things we do are out there where the ethical, legal and operational path forward is unclear. I never made a decision as director that I felt violated my personal code, but I made a bunch of decisions out there I wish I didn’t have to make.”

Hayden then discussed making difficult personal decisions with the same kind of ambiguity. “Let whatever is facing you ripen to let the clarity present itself through prayer or study or advice or just maturing,” he said. “But at some point, you’re going to have to make a decision and it’s still going to be unclear and the outcomes are not just unknown, they are unknowable. In that case you just have to decide because you realize not deciding is a very decisive act.”