Westmont Magazine A Conversation about War and Peace 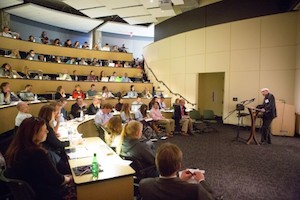 Can a liberal arts education equip students to address critical social issues such as peace and conflict? Scholars and academic leaders from around the world gathered at Westmont in February to consider this question.

“War and Peace as Liberal Arts,” the 12th annual Conversation on the Liberal Arts, featured speaker and noted political theorist Michael Walzer. The Gaede Institute for the Liberal Arts, which promotes the continued vitality of the liberal arts tradition in American higher education, sponsored the conference.

Walzer, professor emeritus at the Institute for Advanced Study (IAS) in Princeton,N.J., discussed “What is Just War Theory About?” He has written more than two dozen books on political theory and the ethics of war, including “Just and Unjust Wars” in 1977.

“That book brought just war theory back to prominence in American political thought and shaped public debates over the use of American military force for three decades,” says Christian Hoeckley, who directs the Gaede Institute.