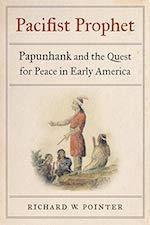 Rick Pointer, professor emeritus of history at Westmont, has written a biography of Papunhank, a little-known Munsee reformer and Moravian leader. The work illuminates the turbulent middle decades of the 18th-century during which Papunhank doggedly maintained an unwavering love of peace. “Paci st Prophet: Papunhank and the Quest for Peace in Early America” (University of Nebraska Press) gives voice to an important element of 18th-century American Indian thought and intellectual tradition.

“I suggest that many of us continue to live with a kind of misimpression about American Indians as always warlike,” Pointer says. “Part of correcting that misimpression is illustrating and giving examples of American Indian peacemaking and peacekeeping strategies through the story of one Indigenous leader who most have never heard of.”

The average American is likely familiar with only two Native Americans from the colonial era: Pocahontas and Squanto. “They are about as atypical of Native persons in early America as we could come up with,” Pointer says. “The book raises larger questions and issues about who and what gets included in our retelling, recovery and reciting of American his- tory. This missing piece speaks into our propensity to perpetuate incomplete and sometimes racist conceptions of Native peoples.”

The path to completing the book was fraught with numerous challenges. In 2008, Pointer lost most of his early research notes in the Tea Fire that de- stroyed his Las Barrancas home. Pointer also served as acting provost at Westmont from 2009-2011 and led several Europe Semesters, further delaying his work.

As with most 18th-century Indigenous persons, little physical evidence remains of Papunhank’s existence. “When you write a biography, typically you’d have a lot of material written by that person as well as documents in their handwriting,”

Pointer says. “I found only two documents that have his name written on them with a symbol that shows he was
a member of the turkey clan within the Munsee tribe. These are the only tangible pieces or material objects of any sort that have survived.”

Much of what we know about Papun- hank comes from government documents, such as minutes of treaties, conferences, letters to and from political and military officials, legislative proceedings and diplomatic dispatches. Religious sources, such as Quaker and Moravian letters and diaries, provide the rest of the information.

“Petitions, pamphlets and meeting minutes offer a particularly good basis for tracking his political and diplomatic dealings as well as his religious thought and practice,” Pointer says. “But thanks to the Moravian discipline of having their congregations keep daily diaries, and their missionaries write frequent letters, there’s also much rich information about the practical realities of Papunhank’s life from 1764-75.”

These letters, essential to Pointer’s research, were written in 18th-century German script and required the services of several highly trained translators. Funding for the project came from the Fletcher Jones Foundation and Westmont.

“From these letters and other sources, we learn not only of his piety but of his prowess as bear hunter and his frequent preference for being in the woods on the move rather than at home in his village,” Pointer says.

He was baptized eight years after first inviting Moravian Christians, a German Pietistic movement, to his village along the Susquehanna River and given the Christian name Johannes. Pointer says Papunhank’s paci sm didn’t originate with the Moravians, who were unusually successful in their outreach to Native persons, nor the Quakers, who had long dominated Pennsylvania politics, but their peace witness reinforced his own and gave him potential al- lies in the quest to keep his community secure.

The historical record is silent for the first 45 years of Papunhank’s life. The Munsees were a small group that originated in New York before colonists forced them to move to New Jersey and northern Pennsylvania. “Suffice it to say, that their numbers, lands and options were shrinking,” Pointer says. “In about 1750, the great turning point in his life came in the form of a dramatic vision quest that brought a radical encounter with the supernatural and a newfound sense of purpose and vocation. He became a determined paci st and prophet fulfilling the divine calling he received.”

In the next decade and a half, as he led his people in the search for a homeland, he preached a message of peace and justice. In the midst of a world at war, the goal of finding an independent and peaceful place to live proved elusive. “Faced with the onslaught of colonial peoples and pressures, scores of Native leaders eventually led their communities into war,” Pointer says. “But contrary to long-standing popular impressions, some Indian headmen sought to resolve conflicts or at least to protect their own peoples through strictly peaceful means. Few did more or tried harder along those lines than Papunhank. In so doing, he exemplified a heretofore largely overlooked Indian peacemaking tradition.”