A prolific artist, Ken Jewesson continually creates designs and collages using whatever he finds at hand—even trash. In the past, he produced large paintings, but in retirement, he lacks the space for them. So he focuses on collages and works on paper he can store easily. He sifts through colorful pieces sitting on flat surfaces throughout his apartment to illustrate his recent efforts. He also makes bright, bold jewelry, much of which he donates to organizations like Transition House in Santa Barbara, which serves homeless families. His restless energy leads him to work in a variety of media, including ceramics and printmaking.

Ken belongs loosely to the Pattern and Decoration movement, which incorporates design elements into paintings and drawings. Like many artists in this school, he finds inspiration in decorative motifs from around the world, especially Japan, the Middle East, Australia, Santa Barbara architecture and the vivid colors of San Antonio, Texas. Ken retains vivid impressions from viewing the art of many different countries. Using Mylar plastic, he makes stencils to produce small, repeated patterns or images from a wide range of perspectives. He endlessly inserts “John” and “Jill,” somewhat abstract, changeable figures that hide and parade amidst his designs.

After earning a bachelor’s degree in art at San Fernando Valley State College (now CSU Northridge), Ken took over his father’s printing brokerage. Although his business included industrial design, he found that too much of his time involved sales. Ken soon sold the brokerage to a printer and enrolled in graduate school at UC Santa Barbara, where he earned a Master of Fine Arts in printmaking.

In 1969, Ken joined the faculty of the Santa Barbara Art Center and discovered a love for teaching. When Brooks Institute of Photography separated from the center, the fine arts school renamed itself the Santa Barbara Art Institute. Eventually he served as director of the struggling institution, but it closed in 1974. Moving his family to Texas, he directed the Glassell School of Art associated with the Museum of Fine Arts in Houston. He then settled in San Antonio, where he directed the San Antonio Art Institute, taught at the University of Texas at San Antonio and continued making art. His work is widely collected in Texas. He returned to Santa Barbara when he retired and most recently taught at Allan Hancock College.

Ken’s wife, Francie, worked as a physical therapist for hospitals and rehabilitation centers, ending her career with 10 years at the former St. Francis Hospital in Santa Barbara. She met Ken on a blind date when they both lived in Los Angeles. Married for more than 50 years, they have three children and seven grandchildren. 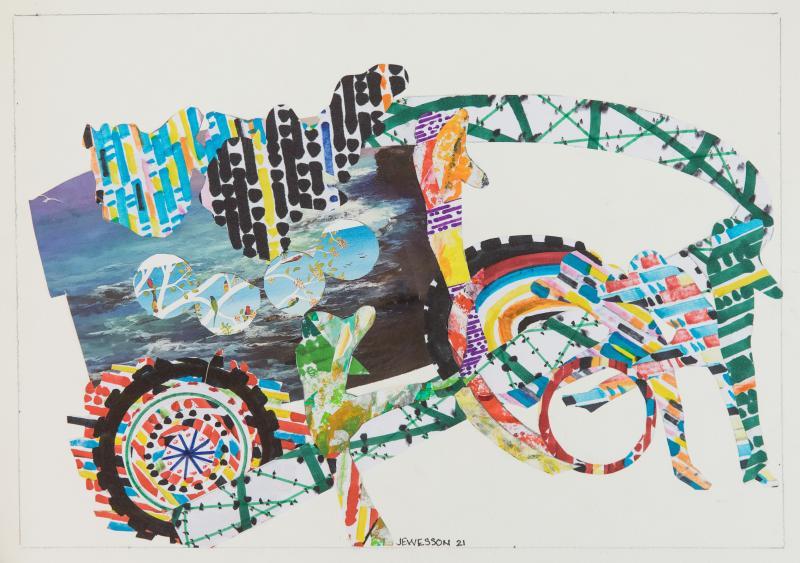 Ken first connected with Westmont when art professors Tony Askew and John Carlander recruited him to teach for them when they took sabbaticals. Ken and Tony also exhibited together. As Ken’s involvement at Westmont grew, the art department invited him to join the Westmont Art Council, and he became an active, long-term member. “I got to know the quality of students at Westmont and wanted to contribute to the college,” he says. “I believe in supporting the local art community.”

When the Jewessons moved into a retirement community, they donated a lot of his work to the Westmont Ridley-Tree Museum of Art, some for the collection and much of it for a fundraiser. “I’ve always enjoyed doing things that help students,” he says. He and Francie have sponsored numerous exhibitions at the Westmont museum, including a number of the annual senior shows.

Ken fiercely believes in the importance of art education and encouraging students to be creative. “I use the example of Picasso fashioning a bull from handlebars and a bicycle seat,” he says. “He took dissimilar things and put them together to make something entirely new.” Ken relishes introducing students to important artists throughout the centuries.

He particularly likes to teach in the studio, making suggestions to students working on their own pieces. “It’s a collaborative process,” he says. “They take some of my ideas and make them their ideas. Artists need to be around people to get input that informs and inspires their art.

“I’ve developed a cyclical system, where I take the last thing I created and extend it into something new so the images grow and change,” he says. Ken continues to draw on his travels throughout the world, the bits and pieces around him and the people in his life to create memorable and colorful designs and images that will serve as an enduring legacy.