Two first-year students from Cuba encountered setbacks and obstacles on their journey to Westmont as they sought to travel legally to the United States in the midst of political tension, an embargo and the pandemic. But as sisters Roxana and Rosario Montané left Havana, they witnessed God’s provision.

“It’s important to always have faith, believe that you can do whatever you want to do and know that God is with you and is going to help you,” Roxana says.

“A lot of times we felt we couldn’t go on,” Rosario says. “When we lost hope, we prayed and prayed, and sometimes we gained hope. That’s why we’re here. Have faith. You can do it if we can do it.”

Roxana, 22, and Rosario, 20, both talented violinists who started playing at the age of 8, heard about Westmont from their cousin, alumna Liz Macias ’21.

“She encouraged us to apply and made us fall in love with the idea of coming here,” Rosario says. “She loved Westmont.”

The two could only dream of studying music at a Christian college. “There are no Christian colleges or institutions in Cuba,” Roxana says. “Attending an accomplished music program where we could grow in our faith would be special for us.”

Even applying to Westmont was difficult. School admin- istrators in Cuba refused to provide transcripts. “Some professors sent scores, grades and letters of recommendation,” Roxana says. “But the institutions didn’t want to help us.”

Finding transportation presented a challenge. The U.S. embassy in Cuba has closed, and few commercial flights leave the country. “We were lost about where to go,” Rosario says. After a moment of prayer, she remembered she had a phone number for a consultation with a lawyer. “I just decided to call,” Rosario says. “It was free.”

The lawyer advised the sisters to fly to the Dominican Republic with courtesy visas. Once there, they could apply and interview for visas to study in the United States. Their courtesy visas were approved.

The sisters had never left the island. Before their 10-hour cab drive to the international airport, they said goodbye to their family.

“They were all there: my grandmas, cousins and uncles,” Rosario says. “It was powerful. I thought I was really tough until that moment, and I realized my life was about to change drastically.”

The friend was a pastor, and he and his family shared testimonies and prayed with the Montanés. The sisters prepared for their interviews at the U.S. Embassy, rehearsing answers to potential questions.

The sisters finally arrived in California. “Everything is so different in the United States,” Rosario says. “Our cousins asked us what we wanted to eat for dinner, and I said, ‘Oh, we can choose?’”

“We like being in class and saying exactly what we think,” Roxana says. “It doesn’t matter if it’s history or politics. We couldn’t do that [in Cuba].” 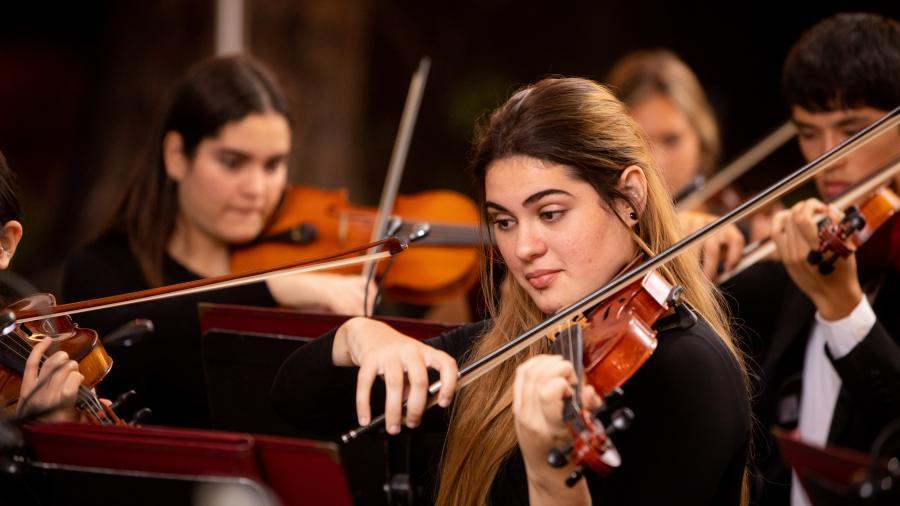 Michael Shasberger, Adams professor of music and worship, says the Montané sisters have blessed the college. “These delightful young people and superbly trained musicians come from a rigorous conservatory, and they’ve had good professional-level experiences in their native Cuba,” he says. “Both tested into our third level of music theory and played in the orchestra’s first violin section for our opening concert. Their seriousness of purpose and great appreciation for the opportunity to attend Westmont make them marvelous students and great contributors to our community.”

The sisters love classical music but are open to performing other genres. “We want to expand our knowledge and better ourselves,” Roxana says. “We have the independence to dedicate our lives to the things we love, and that is enough. We’ll study with great professors in a great environment with freedom.”