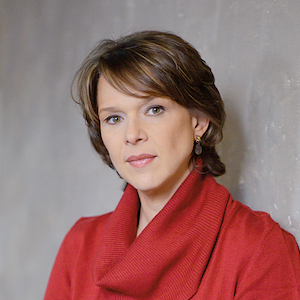 Erin Healy ’92 entered her writing career through the back door. “Editing is my first love and my bread and butter,” she says. She had edited novels for Ted Dekker for years when he asked her to co-write two books with him—and the publisher’s contract included three novels of her own. She is now working on her 10th book; her ninth is due out this fall.

The stories reflect her interest in “thin places,” a Celtic conviction that people can occasionally peer through the veil separating the natural and supernatural. “It can also be any moment or event that gives us spiritual clarity in life,” she says. “No one experiences the world in quite the same way. We’re all going on the same journey, but we take different paths.”

Her books deal with faith-related issues, such as redemption and the nature of God. In “Stranger Things,” a character dies saving the life of another. “It’s a story about salvation and rescue,” she says. “House of Mercy,” one of her favorites, asks if we can say God is good evenwhen we don’t receive what we think we need. The Christian themes there are more subtle. Erin describes “Afloat” as overtly Christian. A downpour and flood isolate the characters who struggle to survive an eerie power outage, explosions and a murder. Other books include “Never Let You Go” and “The Baker’s Wife.” For a full list and sample chapters, see erinhealy.com.

Erin continues to accept editing projects, mostly from Christian authors associated with traditional publishers. She spends about half the year on editing and then turns to writing; it’s challenging to do both at the same time. “I show up for work every day in my office at home,” she says. “But there are always distractions.” She and her husband, who met when they worked for David C. Cook, live in Colorado Springs, Colo., with their two children. “My writing time depends on everyone’s schedules,” she says.

After graduating from Westmont, Erin took an entry-level job with David C. Cook and edited their magazines for six years. After Cook sold the publications, she worked for WaterBrook Press, a division of Random House (now WaterBrook Multnomah), before becoming a freelance book editor in 2002. She does developmental and line editing mostly for fiction. “I work with authors while they’re still writing,” she says. “I help them develop their main ideas, their story arcs and their techniques. I get paid to read and work with cool people—true professionals, attentive to their craft and receptive to my work. Some writers have become friends—there is something about working on a manuscript that is intimate. I have to earn the writer’s trust, and it’s a delicate process.”

Erin fell in love with her English classes at Westmont. “England Semester with Paul Delaney and Heather Speirs was one of the highlights of my life,” she says. “I came in as a young intellectual with black-and-white ways of thinking, convinced that if you worked hard enough you could figure out the system that makes the world spin. But I learned how to treat the world respectfully—and how to ask the right questions and not just have the right answers.”