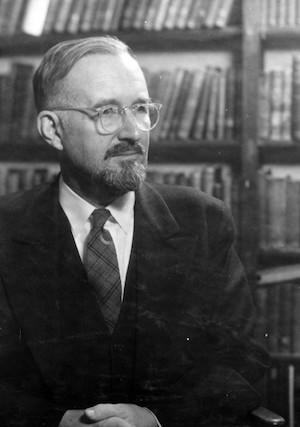 Wallace L. Emerson, Westmont’s first president, came from a family of Christian intellectuals. After graduating from Huron College, he earned a master’s degree at Stanford University and a doctorate in psychology at the University of Southern California. He taught at Occidental College before becoming a professor and dean of students at Wheaton College in Illinois.

When Ruth Kerr contacted him about being president of Western Bible College, the school she had helped establish, he told her he’d accept only if it adopted a liberal arts curriculum and he had sole charge of the faculty. Mrs. Kerr later recalled that Emerson had given her a vision for a “larger work,” a “four-year liberal arts college built on a sound Christian basis.” Emerson even coined the name Westmont, because “it’s out West, and it’s in the mountains.”

He sought to establish a Christian institution that rivaled the best secular colleges. In the first Quarterly Bulletin he wrote, “In every step which has led up to the present organization of Westmont College, the goal has been careful scholarship, sound doctrine and consistent Christian living. Westmont College is interdenominational and evangelical, believing that genuine scholarship is not only compatible with, but necessary to, the Christian viewpoint….”

Emerson built an ambitious list of courses and applied for accreditation, which was denied. But he set an important precedent about the academic seriousness of the school.

To Emerson’s dismay, Westmont suffered from a lack of financing. He brought professors with him only to discover he’d inherited faculty from Western Bible College as well, creating a staff of 33. Instead of the expected 300 students, the college opened with 85. Funds were limited, and faculty came on “faith”; the college didn’t guarantee their salaries. Professors got paychecks when money was available. Few donors supported the college, and Mrs. Kerr gave most of the gifts.

Emerson held the faculty together; he even sold his car to pay their salaries. Professor Paton Yoder found him to be a “very dynamic kind of person with a lot of vision. Some people might call him a dreamer. He drew us all to himself. We became very loyal to him.”

Emerson’s health deteriorated, and he left the presidency after six years. But his legacy endures. He not only articulated the vision for Westmont as a college with rigorous academics and a deep love of God, but he set an example of sacrificial service and giving that continues to inspire the Westmont community.

The Wallace Emerson Society honors this visionary president for his generosity and service and recognizes people of vision who contribute to Westmont’s future through planned gifts or provisions in their wills or estate plans.