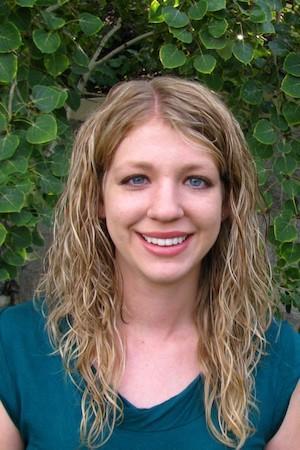 Angie Mayfield Brooks ’07 loved reading mystery novels as a child. “As I got older, I realized how much I enjoyed science,” she says. Her advanced biology class offered a forensic unit that used DNA equipment.“That was my favorite thing in high school,” she says.“It combined my love of science with my love of solving crime.”

Angie arrived at Westmont planning to pursue forensic science, and she majored in chemistry with a minor in biology. Since 2007, she has worked as a forensic scientist in the Oregon State Police Lab in Bend. Occasionally, she goes into the field to collect evidence in homicide investigations and other major crimes. But she spends most of her time in the lab.“We have no badge and no gun,” she says.“We’re just nerdy scientists.”

Angie specializes in two areas: drug chemistry and latent fingerprints. She analyzes and identifies new drugs that show up on the street, including bath salts (substituted cathinones) and K2 or Spice (synthetic cannabinoids). Drug laws identify illegal substances by their chemical make-up, so drug traffickers create new drugs with slightly different chemical structures to evade the law.“Legislation lags behind the drug world,”Angie says.“With some new drugs, there’s no standard to match and compare, and it’s hard to prove that we have something illegal.We need research to create standards for these new substances.” Angie worked on the first confirmed case of bath salts in the United States and talked to people in Israel and Australia to identify the drug.

She also studies evidence to find hidden fingerprints, using chemicals to uncover prints on substances like trash bags. “Matching fingerprints isn’t the automated process you see on TV,” she says.“We don’t get an instant match on our computer screen.” The lab only uses the database, Automated Fingerprint Identification System (AFIS), in cases with no suspects. One of Angie’s colleagues reports unique details in the prints, and AFIS returns the top 30 matches, which must be compared by hand. “It can take days to make a match,” Angie says.

After years of watching TV shows, Angie had “the starry-eyed CSI effect.” But the forensic science depicted in television differs from her work. She gives a talk about the myths: police don’t always call in forensic scientists, they spend most of their time in the lab, they don’t carry a gun or get involved in the investigation, and the only time they see suspects or witnesses is in court.

“Testifying in court is one of the most important things I do,” she says. “I have to explain the evidence in layman’s language so the jury can make an informed decision. My liberal arts education helps me do that, giving me a broader base and teaching me to articulate well.”

Angie spent a summer conducting research with Professor Dave Marten. “I loved the camaraderie I developed with chemistry majors and professors,” she says. “Working with faculty helped me in the competitive field of forensic science—more than 300 people applied for five positions at the lab.” She’s too busy with cases to do forensic research, but she hopes to pursue it someday.

Angie and her husband, Collin, take their dog for hikes and enjoy cross-country skiing and other outdoor activities. He teaches physical education at an elementary school in Bend, and they’re active at Antioch Church.

It’s not as amazing as CSI, but Angie enjoys her job. “I feel blessed to do something I love and that makes a difference in my part of the world,” she says.