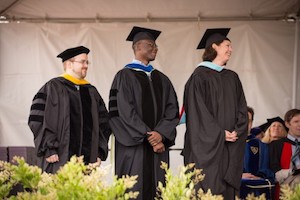 Scott Anderson (art) created a cover for L.A. Weekly commemorating the 15-year anniversary of “The Big Lebowski.” He illustrated two young readers’ book covers for the “Who Was” series from Penguin Books.

John Blondell (theater) directs three Shakespearean dramas in the Balkans this summer. His production of “A Midsummer Night’s Dream” will be part of the National Theatre of Albania’s repertory for the season. His Lit Moon Theatre Company performs “The Tempest” at the Butrint Festival in Albania and the Bitola International Shakespeare Festival in Macedonia.

Dinora Cardoso (Spanish) presented a paper, “The Doppelgänger in La cazadora de astrosby Zoé Valdés,” at the Third International Conference on Caribbean Studies at Marquette University in Milwaukee in April.

Cheri Larsen Hoeckely (English) led a group of five students (Morgan Bailey, Stephanie Brooks, Serena Buie, Madeline Celley, and Annie Kyle) who presented “Companions in the Forest of Difficulty, or How Five First-Year Students Read and Wrote about David Copperfield and Went on to Sustain a Literary Community,” at the annual Christianity and Literature Conference in May at Point Loma Nazarene University.

In the fall, Russ Howell (mathematics) will assume the Kathleen Smith Endowed Chair, previously held by Allan Nishimura (chemistry). Howell has received a $40,000 grant from the National Science Foundation to convene a team of 14 experts in complex analysis at Westmont in June 2014 to work on revitalizing the teaching of this subject at the undergraduate level.

Michelle Hughes and Jane Wilson (education) presented “Tweet Talk: Using Twitter to Connect, Celebrate and Collaborate” at the California Council on Teacher Education Conference in April. They co-authored “Let’s Change the Conversation” for the 2012-2013 edition of Christian School Education based on their presentation at the 2012 Association of Christian Schools International Conference. Hughes published a review in the 2012 Journal of Education and Christian Belief.

A chapter by Wayne Iba (computer science), “Before We Get There, Where Are We Going?,” appears in Robert Trappl’s book, “Your Virtual Butler: The making-of,” published as part of the Springer Lecture Notes in Artificial Intelligence (2013).

Savannah Kelly (instructional services librarian) presented “Connecting the Academy and the Real World: Using Dilemma Cases to Teach Students Lifelong Inquiry” at the Workshop for Instruction in Library Use in New Brunswick in May.

Tremper Longman III (Robert Gundry professor of biblical studies) co-edited “The Words of the Wise are Like Goads: Engaging Qohelet in the 21st Century,” which includes his essay, “Determining the Historical Context of Ecclesiastes.” He contributed an essay, “What Genesis 1-2 Teaches (and What It Doesn’t),” to “Reading Genesis 1-2: An Evangelical Conversation.” At the BioLogos Workshop in New York City in April he spoke on “The Bible and Human Origins from the Perspective of an Old Testament Professor.”

Andrew Mullen (education) has published “An Unsatisfactory, Ever-More Elusive ‘Common Ground’” in the Journal of Education and Christian Belief, which reviews several books: “The Bible, the School and the Constitution: The Clash That Shaped Modern Church-State Doctrine,” “Law, Religious Freedoms and Education in Europe,” “Religions, Education and the State: An Unprincipled Doctrine in Search of Moorings,” and “Education and Religion: Global Pressures, Local Responses.”

Tatiana Nazarenko and Sarah Skripsky co-authored a proposal, “Closing the Loop with the Limited Data: Lessons Learned from Assessing Student Writing Across the Curriculum,” for the Western Association of Schools and Colleges’ Academic Resource Conference in April. Nazarenko moderated a panel on engaging faculty in assessment.

Edd Noell (economics and business) has co-authored a book, “Economic Growth” (American Enterprise Institute, 2013). He spoke on “Why Does Economic Growth Matter? The Moral and Economic Case for Growth” at Seattle Pacific University as part of AEI’s Values and Capitalism lecture series at Christian colleges. He has received a grant from the Council for Christian Colleges and Universities to study “What is Legitimate Economic Gain? The Origins and Development of Christian Thinking on Profits and Usury.”

Ray Paloutzian (psychology) co-presented “The Sociology of Religion and the ‘Multilevel Interdisciplinary Paradigm’ in Conversion Research” at a meeting on New Approaches to Religious Conversion at the annual meeting of the Society for the Scientific Study of Religion in Boston. He co-published “Implicit and Explicit Anthropomorphic Reasoning about Divine Agents: A Quasi-Experimental Ethnographic Study of the Cognitive Effects of Gaudiya Vaisnava Religious Practices” in the Journal of Cognition and Culture.

Caryn Reeder (religious studies) has received a Fulbright teaching and research award to live in the West Bank from September 2013 through June 2014, teaching two classes at a Palestinian university and conducting research on women, children and war in the biblical worlds and today. She published an article, “Sex and Execution: Deuteronomy 22:20-24” in Expository Times in March. She participated in the Institute for Biblical Research’s Young Scholars Summit in Cambridge in June. Her essay, “Pity the Women and Children: Punishment by Siege in Josephus’s Jewish War,” appears in the Journal for the Study of Judaism in the Persian, Hellenistic, and Roman Period.

Helen Rhee (religious studies) published an essay, “Every Good and Perfect Gift Comes from Above: The Episcopal Control of Charity and Christian(–ized) Patronage,” in Scrinium (Patrologia Pacifica Tertia).

An article by Marianne Robins (history), “A Grey Site of Memory: Le Chambon-sur-Lignon and Protestant Exceptionalism on the Plateau Vivarais-Lignon,” appears in the June 2013 issue of Church History.

Warren Rogers (physics) and 10 physics majors attended the annual Conference for Undergraduate Women in Physics at the California Institute of Technology in January. Sierra Garret and Alyson Barker presented research conducted with Rogers and won fifth and seventh places in the poster session. Rogers has organized the Conference Experience for Undergraduates for 16 years, and a recent decadal study on the state of nuclear physics highlights his work.

Carmel Saad (psychology) will present “The Mediating Role of Emotion Regulation on the Well-Being of Highly Integrated Biculturals” at the American Psychological Association meeting in Honolulu in July.

Russell Smelley (kinesiology) has contributed an article, “The Importance of Having a Coaching Philosophy” to Track Technique. He will make a presentation on this topic at the International Coaches Conference in Durban, South Africa, in September.

Lesa Stern (communication studies) co-authored an essay, “A Content Analysis of the Prevalence and Portrayal of Sexual Activity in Adolescent Literature,” that will appear in the Journal of Sex Research.

Jennifer Taylor (director of internships) accepted the Outstanding Four-Year College award from the California Internship and Work Experience Association (CIWEA) in Sacramento in March. Westmont was commended for tracking interns online with an Internship Learning Agreement Form. Taylor serves as secretary of the CIWEA board.

Jim Taylor (philosophy) presented “Apologetics, Argumentation, and Imagination: A Strategy for the Whole Person” at a conference, Imagining the Good Life: Apologetics and Human Flourishing, at CaliforniaBaptistUniversity.

Jane Wilson (education) and senior Jennifer Sanchez co-presented “Guiding for Growth and Grit: Empowering Students of Poverty to Persevere”at the Christians for Diversity in the Academy conference at Azusa Pacific University.

Tim Wilson will serve as interim vice president and dean of students effective Sept. 1, during the search for a replacement for Jane Higa, who retires in August.

Telford Work presented “Jesus’ New Relationship with the Holy Spirit, and Ours: How Spirit-Christology Helps Resolve a Chalcedonian Dilemma,” at the first annual Los Angeles Theology Conference in January.

Thanks to an award-winning essay by Diane Ziliotto (librarian and college archivist), “Viewing the Possibilities: A Film Collection’s Impact at Westmont College,” Voskuyl Library will receive a free year’s subscription to a new resource, Filmakers Library Online, as a prize from Alexander Street Press.