Westmont Magazine Finding a Formula for a Career in Math 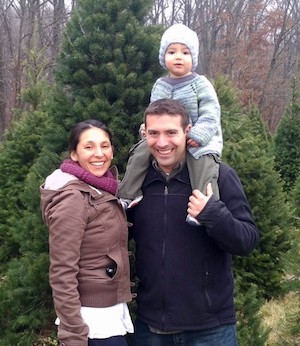 What’s a math major to do? Patsy Calderon Llo­­yd ’01 has worked in a biochemistry lab, taught college classes, calculated sample sizes for clinical trials, and constructed databases for research that may shape government policy. “It’s great that I have different paths to take,” she says.

Patsy arrived at Westmont uncertain what to study. She’d never thought of herself as a mathematician, but she enjoyed calculus. A glimpse of an advanced math textbook discouraged her, however. “I thought there was no way I could learn this material,” she says. “But Professor Howell convinced me I could. The math professors had more faith in me than I had in myself. I learned integrity from them and how to persevere through things you don’t think you can accomplish. I felt safe about making mistakes. Westmont was an academically rigorous place for me, but it was also home.”

An interest in nursing led Patsy to major in biology as well. She worked in a biochemistry lab at Baylor College of Medicine in Houston for a year after graduating, which helped her decide to focus on computing; she completed a master’s degree in biostatistics at Harvard School of Public Health. Taking a break from school, she traveled in Southeast Asia, visiting Australia, Thailand and Cambodia and spending seven months in India, where she volunteered inMother Theresa’s shelters. She also helped develop and conduct a survey to test water in West Bengal for arsenic contamination.

Patsy returned to Westmont in 2005 to teach calculus and statistics for a year. “After seeing so much poverty in India, it was difficult to come back to the abundance of the United States,” she says. “It was also challenging to teach for the first time—but I was happy to be back with my professors.”

Patsy married her husband, Matt, a certified industrial hygienist she met at Harvard, and moved with him to Washington, D.C. He studies the health risks of pesticides, and she enrolled in a doctoral program in epidemiology at George Washington University in 2007. She has held two jobs as a biostatistician, most recently at the International Partnership for Microbicides (IPM), where she assisted by calculating sample sizes for clinical trials testing products to prevent HIV infection. IPM seeks to help women in developing countries protect themselves in affordable and effective ways. Patsy consulted with physicians involved in the trial and provided tables and figures for reports.

As a research programmer for Mathematica Policy Research, she now uses statistical software to answer policy-related questions. In one project, she helps construct a database of Social Security beneficiaries. She has also analyzed data from the worldwide Health Care Survey of Department of Defense Beneficiaries, which includes everyone eligible for healthcarecoverage through the military health system, investigating and reporting on maternal-child health indicators, communication with primary-care physicians, and health disparities among participants. “I’ve developed an interest in policy and find it rewarding,” she says.

The mother of a toddler, Patsy is writing her dissertation on a disease that poses greatest risk to infants: RSV (respiratory syncytial virus). Her work gauges the burden RSV places on hospitals and quantifies the risk of the seasonal illness to babies born at different times of the year. Using data sets to trace patterns in populations helps epidemiologists prevent infections.

Away from work, Patsy and Matt find time for running, biking, visiting friends and exploring the Smithsonian. “We like to keep active,” she says.