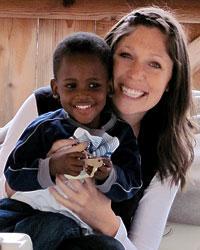 In South Africa, a young girl is more likely to be raped than to learn to read. Sexual assault and promiscuity feed the AIDS epidemic there, which robs 500 children of their parents each week. Beth Gillig ’03 knew these dismal facts before she arrived in South Africa for a six-week research project on AIDS orphans in 2002. But she was unprepared for her response when she met the people behind the statistics.

An anthropology major, Beth studied AIDS orphans as a cultural group and worked in daycare facilities, clinics and schools. “I saw what AIDS looks like on a personal level,” she says. “Children are the most helpless group in the community. None of the people we met who were trying to help were Christians, and they had nothing more than their own strength to carry them. What they were doing was mostly for themselves. People without Christ have no hope, and I wanted to give people with AIDS hope. God is in love with the orphan, widow and stranger. Reaching out to them is the right thing to do. I came back to Westmont wanting to change the world for Jesus Christ, doing it his way for his glory.”

After Beth graduated, she looked for a job in the non-profit world. “I was sure any international organization would be happy to employ me, but God closed all the doors,” she says. “I was the director of children’s ministry at a church in Orange County for three years, and it was the last place I wanted to be. Then I began to see that affluent children neglected by their parents have the same behavioral issues and sense of abandonment as kids with AIDS. God showed me my prejudice. He doesn’t discriminate; we all need him.”

Through that church, Beth learned about Acres of Love, a ministry that cares for AIDS orphans. She spent three years working for the organization, beginning in the U.S. office and moving to South Africa in 2008 to manage five group homes. In 2009, she joined the staff at Oasis Haven of Love.

“Some organizations do a good job of caring for orphans in-house and others do a good job of placing them in adoptive homes; Oasis focuses on doing both,” Beth says. “Staying in a home helps kids heal emotionally and spiritually, but the best solution for them is being adopted by a family who will care for them forever. Finding a place to belong pulls kids out of the cycle of abuse, trauma and disease and gives them hope for a better life.”

Speakers in chapel encouraged Beth to know God better and experience him personally. “I read my Bible, asked questions, tried to figure things out, and decided to say to God, ‘You are in control. I want my life to be what you want it to be,’” she says. “My life changed 180 degrees from that point on. God used Westmont to develop me as a Christian and prepare me for life.” Her parents, David ’78 and Paula Kenyon ’79 Gillig also went to Westmont.

Beth will complete a master’s degree in organizational leadership at Biola in May. “I feel called to advocate for those who don’t have a voice,” she says. “My passion right now is for AIDS orphans. When children don’t get what they need from a non-profit, it’s the result of bad leadership. I know I have a lot to learn as a leader, and I want to do my absolute best and be well equipped. To make a difference, you need more than heart — you need knowledge and the right tools, and you need to do your work well.”