Westmont in San Francisco adds a rooftop garden and the garden on campus continues to grow. 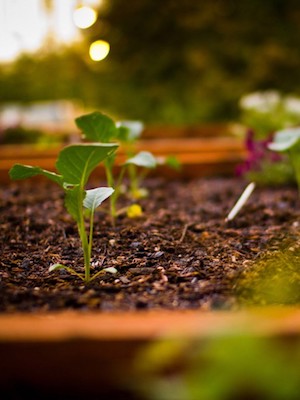 A garden is growing on the roof the Clunie House, the site of Westmont in San Francisco and the home of 24 students. David and Judy Van Horn ’69 Neunuebel funded the project, which began in September. Dan Ribbens ’76 designed the garden, and Pecos ’10 and Katie Pinson ’10 Pryor and Curtis Davenport ’10 constructed it.

“The garden is bursting with kale, rainbow chard and cilantro,” says Kelsey Palmer, assistant director of operations for Westmont in San Francisco. “It’s a beautiful addition to the house and neighborhood. The rooftop garden will provide students with homegrown nutritionand serve as an educational tool to reinforce values of environmental stewardship and organic and fairly-traded food production.”

“By putting in perennials, we’re creating a legacy of permaculture at Westmont,” Waldrop says. “The trees will border the two campus gardens, creating a space where the community can enjoy the serenity of a diverse landscape. We’ll also increase the variety of produce we donate to Bread of Life, a campus meal-sharing program.

“I’m hoping that the garden project can bring together entities on campus as well as in the larger Santa Barbara community,” Waldrop says. “Santa Barbara is such a garden-friendly city that projects such as these provide many opportunities for collaboration.”