Rebekah Wong ’17 has returned home to Singapore, but she’s still working for admissions as she did during her years on campus. Now she travels and connects with prospective students on the Pacific Rim, meeting applicants in person in Malaysia and Indonesia and sharing her own experience as an international student at Westmont. “The whole process can be so overwhelming,” she says. “I want them to know a real person who has walked exactly in their steps when searching for a college in the United States.” Three current students, Andres Quiros, Martha Bartchy and Mpho Mthethwa serve as global recruiters, and they communicate every day with prospective students overseas. Mpho ’22 (South Africa) received a Michaelhouse Scholarship; Andres ’20 (Costa Rica) majors in economics and business and plays on the men’s soccer team; and Martha ’19 (Germany) will graduate with a degree in psychology.

“I love serving on the front lines and sharing my experiences with them,” Andres says. “The way Westmont’s community genuinely cares and goes out of their way for others drew me here. Everyone at Westmont is truly present in the moment, which has strengthened my walk with Christ. I’m excited to help Westmont grow the number of international students, which will enrich the lives of everyone on campus.” 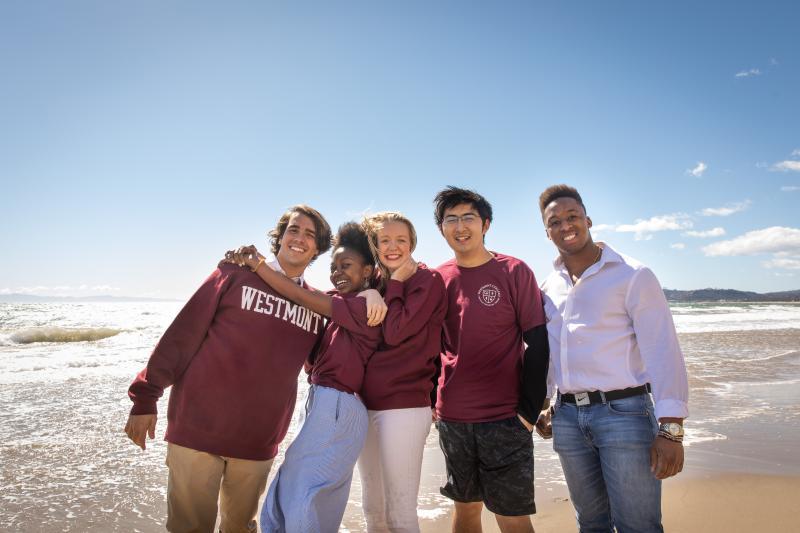 “The way our international students engage with us always impresses me,” says Mike McKinniss, director of admissions. “They’re eager to be adventurous and independent, knowing they’re leaving behind everything familiar to step into a whole new life and culture. Seeing Westmont through their eyes when they arrive on campus for the first time has helped us better support and serve them along the way.” Mike works with Sarah Sagredo in the Student Life office to mentor and advise these students.

Both Ruth Kerr, Westmont’s principal founder, and Wallace Emerson, the college’s first president, envisioned an international reach for the institution, preparing people who could work and serve throughout the world. But they could scarcely have imagined how the world would shrink as technology and travel grew and the need arose to build a society and global community that promotes human flourishing worldwide.

The college is growing its global reach by recruiting from overseas and adding new programs and facilities, such as the Singapore Summer Session and the Global Leadership Center. “We’re making a more intentional effort to admit and retain a vibrant community of international students,” says Irene Neller, vice president for enrollment, marketing and communication. “We think it’s imperative to increase our presence in the Pacific Rim and other countries where our alums already lead and serve in ministry, education and business. We believe in preparing students to live in a diverse, complex and quickly changing society so they can take their place as citizens of the world.”