Westmont Magazine The Hardemans Field a Team of Teachers 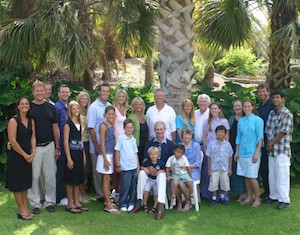 Tine ’55 and Jan Rice ’56 Hardeman have established a dynasty of committed teachers, successful coaches and global Christians that includes nine alumni. In January, the Westmont Education Department honored three generations of Hardemans with their 2012-13 Excellence in Education Award.

The story begins with Tine and Jan, who’ve devoted their lives to Faith Academy in the Philippines. Tine taught science, Bible and physical education at this school for missionary children for 44 years and coached basketball and volleyball. Jane served for 54 years as the school nurse.

“Our grandpa taught us to love basketball and modeled how wonderful being a teacher is,” says Katie Hardeman ’04, who represented the family at the ceremony. “He taught us that when you’re fully dependent on God, life can be an adventure and you can make an impact on others and spread his kingdom.”

Four of Tine’s and Jan’s children graduated from Westmont and entered the family business. Tine Jr. ’78 spent two years teaching at Seoul Foreign School in South Korea before moving to Los Angeles, where he has worked for 27 years, teaching mostly history at Paramount High School and Troy High School. He has coached varsity boys basketball for 21 years and collegiate women’s basketball for eight years.

After spending five years at Goleta Christian School, Terri Hardeman Turner ’80 has taught kindergarten at Santa Ynez Elementary School for 22 years. Her husband, James Turner ’80 has been a Lompocscience teacher for 15 years.

Tom Hardeman ’82 started his career in elementary education at Buellton School (five years) and then moved overseas, spending 14 years at Christian Academy in Japan and six years at Faith Academy, where he serves as superintendent. He has also coached volleyball and basketball. His wife, Maddy, is a biology teacher.

For 22 years, Todd Hardeman ’90 has taught third or fourth grade at Brent International School in Manila, and he has coached varsity boys basketball for 17 years. His wife, Robin, has taught science at both Brent and Faith Academy and has coached girls volleyball.

Katie ’04 (her father is Tine Jr.) has taught high school history and English for five years in Los Angeles, and spent one year teaching in Mozambique. She played basketball at Westmont and coaches girls basketball. Her former coach, Gregg Afman, describes her as the epitome of a student-athlete. He commends the family “for not only being committed educators butdoing it in a way that demonstrates Christ.”

“The Hardeman family represents Westmont’s ideals to be a global, Christian, liberal arts institution,” says Professor Andrew Mullen, who chairs the education department. “When you look at all the subjects they have taught, they could almost start their own college.”

“This award honors God because he’s the one who called us to Westmont, gave us these gifts and abilities to be teachers, and gave us a desire to see his kingdom grow,” Katie says. “God has worked in our family in a unique way. I’m thankful Westmont taught us how to live as followers of Christ.”