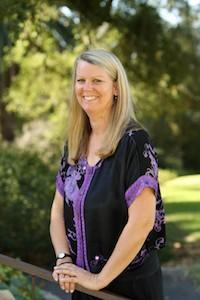 Cheri Larsen Hoeckley admits she isn’t a marriage counselor, but the English professor senses a responsibility to guide her students to be the people God is calling them to be — outside of marriage. She coordinates Westmont’s new Gender Studies Program and is writing a book, “Wedding Plots: Marriage, Fiction and Faith,” which explores marriage plots in contemporary romantic comedies, in film adaptations of British novels and in Jane Austen’s “Sense and Sensibility” and Charlotte Brontë’s “Jane Eyre.”

“The book brings up the complications of marriage plots and the often-forgotten minor plots of adult development that contribute to a richer awareness of marriage and singleness in Christian lives,” she says. “I ask a question my students don’t ask enough, “Why is marriage the central marker in a Christian woman’s life?”

The book, geared toward a popular rather than an academic audience, addresses conversations about marriage she’s had with students during her 14 years of teaching. “Like my students, I find myself in the novels that I read,” Cheri says. “That often means you put yourself in a place where marriage is going to be the major milestone in your life. But once you get there, you realize it’s not the end of anything. It’s a beginning. It might be the end of a novel, but it’s not the end of any point in anybody’s life. Readers in their mid-20s shouldn’t believe that marriage is a point of closure in their lives because it’s used for narrative closure in these stories.”

Cheri is married to Christian Hoeckley, director of the Gaede Institute for Liberal Arts. Because they both work at Westmont, their marriage is often a topic of conversation with Cheri’s students, who ask her why she chose to get married and when. “Because they see Chris and me eating lunch in the Dining Commons they think they know how our marriage operates, but they don’t see the kind of work it takes to be married,” she says.

Cheri thinks the Christian community can stem the rate of divorce by changing the discussion of marriage on college campuses. “Instead of suggesting that it’s the default, we should help Christian students imagine how marriage might, or might not, be beneficial,” she says. “Being married makes you married — that’s all. It doesn’t mean you’re going to have economic security, be emotionally fulfilled or have a deeper relationship with God.

“I think we’ve been irresponsible in letting Christian students carry these myths through college, rather than encouraging them to examine these ideas. A lot of us know marriage can be great, but it can also be difficult, and it’s not a guarantee of happiness.”

Cheri sees young adults shaping their lives around the stories they read. “I’m called to read books well and talk about them,” she says.“I hear from a lot of people who read in a way that makes them imagine they want to be Elizabeth Bennett or Jane Eyre on some level. That’s where I come into their lives. ‘Love the book,’ I tell them. ‘Have a great time. See what it means to be an empathetic reader, but what do you really want in life?’ This isn’t counseling, it’s sorting through how we tell each other stories and what stories we take in. We can have good conversations with our students on these issues.”

In her new role with the Gender Studies program, Cheri organized several events on campus this year, including lectures and activities with Apricot Anderson Irving ’97, memoirist and oral history writer; Leslie Leyland Fields, author, editor, speaker and an active participant in her family’s salmon fishing business in Kodiak, Alaska; and Erin Thomason, a doctoral student from UCLA who spoke about women working in the Chinese sex industry.

“Events like these provide information to nuance students’ thinking and prepare them to engage both more rigorously and more hospitably in conversations about masculinity and femininity,” she says.

“Inside and outside the church, people are asking serious and sometimes difficult questions about what gender identity means,” she says.“The gender studies program creates more opportunities for our students to engage in those conversations, to learn how to listen to others, and to develop a sense of the ways their faith gives them important insights to contribute.”