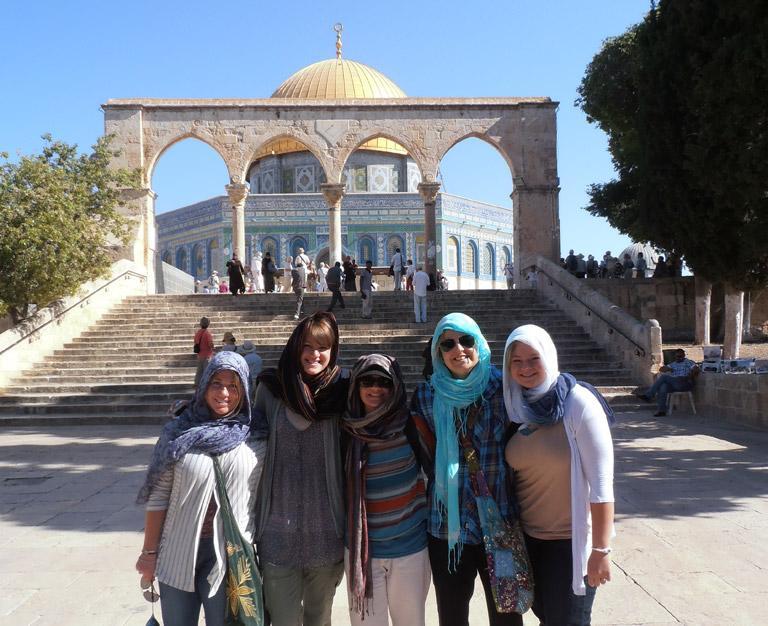 As an alumna of Westmont, I’ve read about the amazing experiences of students in off-campus programs for more than 10 years. I’ve always thought,“I’d love to go too!” Last fall I got my wish. I received an email inviting alumni to join students on a Mayterm 2012 class,“Constructing Sacred Pilgrimages.”The itinerary included Israel, Jordan, Northern Ireland and England.

While it wasn’t possible for me to attend the entire four-week class, I was fortunate to travel to the Middle East with the group and visit Israel and Jordan. I became part of the Westmont community once again. Seven students and three other alumnae joined professors Deborah Dunn and Caryn Reeder in this journey of faith and discovery. We eagerly started the summer by embarking on a sacred pilgrimage to the Holy Land.

In Israel and Jordan, our group strived to be pilgrims rather than tourists, which is the main reason I choose to go with Westmont. For me, tourists are people who travel for pleasure. They visit a foreign locale to see the sights, take in the culture, snap some pictures and eat the food. On the other hand, pilgrims travel for religious reasons to particular religious sites. They approach a holy place that holds special significance to them as an act of religious devotion. It’s more than a casual trip. They seek a spiritual experience— they seek God—at a particular sacred location.

As we undertook our own pilgrimage, we visited many religious sites dedicated to historical biblical events, such as Christ’s birthplace in Bethlehem, the site of the Sermon on the Mount in Galilee, and the place of the crucifixion in Jerusalem. We met amazing people, from the older Palestinian man who drove two of us to our hotel when we got lost in Nazareth to a young Jewish man who gave me a tour of the rooftops in Jerusalem’s Old City.

As the trip progressed, I kept waiting for some magical, mystical religious experience—for the ground to shake or the light to shine down—metaphorically, of course. This was a sacred pilgrimage, after all. Such an experience would signal that I’d really become a religious pilgrim and was entering these places with the right heart, the right mindset and an eye to meeting Jesus.

But it never happened. I felt sure that when I visited and prayed at the Western Wall, the only remaining wall of the Temple in Jerusalem where the presence of God dwells on earth, that I would hear Him speak to me and feel His presence as never before. While it was amazing, moving and beautiful, it wasn’t what I was looking for.

I felt disappointed and frustrated that I didn’t feel more connected to Jesus Christ or emotionally moved at all these religious places. I kept asking myself,“What’s wrong with me?”As it turned out, I discovered from talking with others that many of us were wrestling with the same issue.

After I returned home, I thought a lot about the trip over the next few weeks. One day I realized why I hadn’t “found” Jesus in Bethlehem where he was born, in Nazareth where he was raised, in Galilee where he spent so much time teaching, or in Jerusalem where he was crucified, buried, resurrected and taken up.

I realized I had brought Jesus with me—it was something akin to finding the sunglasses I was looking for on top of my head. With Christ’s crucifixion, the Temple veil tore down the middle from top to bottom, signifying that the way into God’s presence is now open to us all through Christ’s mediating work. We no longer have to journey to the Temple in Jerusalem to commune with God. Likewise, with Christ’s resurrection from the dead and ascension, the Holy Spirit has come to us all to be our comforter and helper—God’s presence within each of us—making our body God’s temple, where he dwells.

I will still always treasure my memories of the Holy Land, especially of Jerusalem.Walking from the Garden of Gethsemane just outside the city walls up the hill toward the gate Jesus entered, I imagined what he must have been feeling and thinking as he walked that long, hard path to his death. So many biblical passages come to life now as I read them because I can picture the place: the rolling hills of Bethlehem, the walled city of Jerusalem, the cliffs of Capernaum, the tranquil sea of Galilee, the desolate valley of Megiddo, the ruins of Jericho, and the green water of the Jordan River. But I will also remember that every land is holy now— filled with God’s presence—and every person who belongs to Jesus Christ is a holy body, filled with God’s presence as well.

In the end, I have grown closer to Jesus Christ through this experience, just not in the way I had expected. Once I realized that He had always been with me—from when I packed my bags to when I emptied them out—I learned the true depth and power of the New Testament gospel.