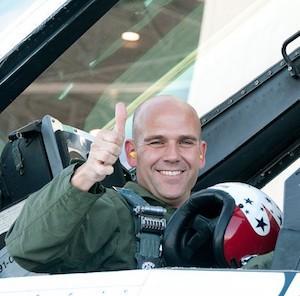 Civilians rarely ride with the Thunderbirds, an Air Force demonstration team that performs aerobatics at airshows. But Mark Lillis ’88 climbed into an F-16 last year and witnessed heart-stopping maneuvers from inside the cockpit. Before the flight, he spent three hours learning how to breathe, handle G forces and exit the aircraft in an emergency, and he earned a 9G pin for staying conscious and keeping his lunch down. The mayor of Fairfield, Calif., had nominated Mark as a Hometown Hero for setting up a successful after-school tutoring and mentoring program, and the Thunderbird fighter pilots honored him with the ride of a lifetime.

After graduating from Westmont, Mark worked for a Santa Barbara city councilman before becoming operations manager at Las Positas Park, where he started a summer camp program. He then coordinated youth programs for the Santa Barbara Parks and Recreation Department and taught communication studies at Santa Barbara City College. Meanwhile, he earned a master’s degree at Azusa Pacific University in organization and leadership development.

In 2000, Mark returned to Fairfield, his hometown, to organize community programs for youth and oversee city athletic facilities. But he wanted to explore being an entrepreneur, so he opened a pizza restaurant, selling it after a year. “It’s tough work being entrepreneurial,” he says.

When his church, Parkway Community, adopted a non-profit venture, Mark’s experience with youth programs made him the logical person to direct it. “We wanted to minister to our neighborhood, which was turning violent,” he says.“In 2005 we followed the example of a congregation in Sacramento and set up a free tutoring center in a nearby apartment complex serving low- income residents.”The city, county and other organizations joined in the project, which became Leaven, a non-profit organization that now reaches 200 children and 700 families through five neighborhood centers.As executive director, Mark works with full-time site directors and more than 100 volunteers, who include police officers, city council members, seniors and students. He also raises the funds for the program, which promotes good health, nutrition and exercise for families as well as tutoring and mentoring for youth.

“Our purpose is to share the love and compassion of Jesus Christ through acts of mercy and help to our neighbors,” Mark says. He sees the centers as a mission field where Christians engage in community service, assist at-risk youth and support families.“Students are doing better in school, truancy and absenteeism have declined, and crime rates have dropped,” he says. Impressed by these results, the owners of a complex housing a tutoring center in Fairfield asked Leaven to start a program at one of their properties in San Bernardino, Calif.

“We’ve developed a cost-effective model that uses abandoned facilities—and the recession has created lots of unused spaces,” Mark says.“We offer a way for churches to serve outside their walls and expand the kingdom to bless members as well as make an impact in the community.”

Two Westmont alumni help Mark tell the story of Leaven. Todd Slocum ’93 produces videos about the ministry, posted on the website (www.myleaven.org) and on YouTube, and Matt Rhodes ’93 does graphic design.

Mark intends to stay in Fairfield with his wife, Melinda, and their new son, Hudson, and he’ll continue looking for ways to serve his hometown.