Katie King Rumford ’06 grew up at Westmont, where her father Dave ’76 worked as a resident director before becoming the longtime housing director. “Attending a school so familiar ended up being good for me,” she says. For her art major, Katie took all three of Scott Anderson’s design courses. “He has had a huge influence on me, especially as he also did design work on the side. He answered so many questions for me when I was applying to graduate school.”

Katie met her husband, Peter Rumford ’06, at Westmont—her mother, Laurie Punches ’80, is also an alumna. Peter earned a Bachelor of Science in kinesiology and completed a Doctor of Physical Therapy at UC San Francisco. Katie went to graduate school in San Francisco as well, receiving a Master of Fine Art in graphic design at the Academy of Art University. “It was one of the hardest things I’ve done,” she says. “The program was so rigorous. We started with about 65 students, and about 12 of us graduated. Westmont challenged and supported me, but my grad school teachers focused mostly on what wasn’t working. The experience taught me how to interact with fellow designers: I’m direct but in a kind, encouraging and appreciative way.”

Spending a year in India, Mumbai and Dehli offered a great change of pace. Peter managed a physical therapy clinic there, and Katie did freelance design work. “My U.S. clients briefed me, and I worked while they slept so they woke up to the completed job. I loved exploring India and experiencing something so utterly different from what I knew.”

Peter’s fellowship at the Institute of Physical Art (IPA) Manhattan took them to New York City, which opened opportunities for Katie. “As in India, the Lord provided wonderful housing for us,” she says. A couple they met in Delhi offered them a furnished apartment on the Upper Eastside. She reconnected with Johnny Selman, a friend from graduate school, who had started his own business in New York after working for Google and a design studio. She applied for dozens of positions, but when Johnny offered her a job with Selman Design, she accepted.

“Google put him on retainer, and he had more than he could handle,” she says. “I’m still working for him. We both had the same training and knew we could handle Google as a client and meet their high expectations and tight deadlines.” The firm has since hired more designers, and Katie has stepped into a leadership role, mentoring and encouraging them. “It’s so important for a team to feel valued,” she says.

Katie and Peter moved to Dana Point, Calif., in 2016 when he opened his own business, IPA Physio Orange County. “Design is a very mobile career,” she says. “You can take it with you wherever you go.” She gets up early and works on New York time.

See some of Katie’s designs at katiekingrumford.com. One of her favorites appeared on the cover of the New York Times Sunday Review illustrating “Political Party Meltdown.” It depicts the 50 stars on the flag as little ninjas fighting each other. Her animated art for the editorial “What the Paris Climate Meet- ing Must Do” shows the countries of the world as smoke from a series of chimneys. It made the list of the 100 Best New York Times Illustrations in 2015. She has created hand-lettered maps and illustrations for Google and sells hand-lettered neighborhood maps in her Etsy shop.

Her latest project, a daughter born in February—their first child— kept her out of the studio only temporarily. “I absolutely love design,” Katie says. “It incorporates all the things I like: order, grids, rights and wrongs, and reasons about why you do things.” 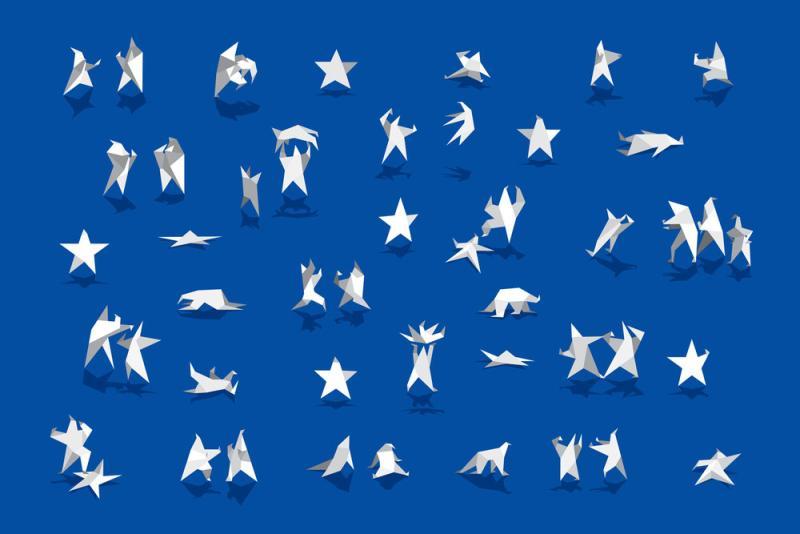