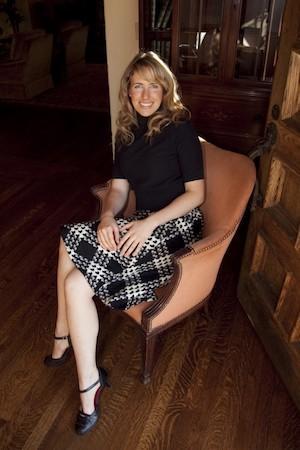 Chrissy Deferville ’02 wants to inspire entrepreneurs and executives to invest in their local communities by creating jobs, contributing financially and volunteering. “Everyone can do something to make the world better,” she says.

Chrissy herself has established Catalyst, a non-profit organization in Santa Barbara that educates and motivates business people. She’s uncovered an interest in making connections with like-minded people and a demand for continuing education, especially on narrowly focused topics. “Entrepreneurs and professionals want to be inspired and challenged to grow,” she says. “They want to learn from each other.”

When Catalyst began in 2008, seasoned executives and industry leaders shared their experiences with putting ideas into practice. The audience grew bigger with every event, and Chrissy experimented with different formats. For a year, the organization fell under the umbrella of the Santa Barbara Young Professional Club. But Chrissy soon realized the event had become its own entity and needed a team to manage it. She has built an active network of 30 volunteers who pool their resources, refer speakers and help her plan programs.

“I approach Catalyst and everything I do with an entrepreneurial spirit,” she says. “We want to be a flexible, adaptable grass-roots organization. Every year, Catalyst has shed its skin and become something new.”

Recently, Chrissy has focused on Minds, where 10 people discuss a specific business-related issue over lunch. The executives and entrepreneurs who lead these sessions choose the subject. Catalyst sends out invitations by email, and the events, which cost $20-50, quickly sell out. “Attendees bring a wealth of knowledge that results in concentrated, high-level communication,” Chrissy says. The Catalyst team has also created Founders Room, an online space where 45 local start-up companies can consult with each other.

The latest initiative, set to debut in 2012, involves hosting online video conferences that connect business people from Brazil, Russia, India and China with Santa Barbara-area entrepreneurs. Like Minds, these sessions will be limited to a handful of people and focus entirely on discussion and answering questions. “Our goal is to reach globally and connect locally,” Chrissy says.

An economics and business major at Westmont, she spent a semester at the Copenhagen Business Institute taking international marketing classes and connecting with students from around the world. Initially interested in attending law school, she also studied foreign policy at American University in Washington, D.C., for a semester. An intern for the Republican Congressional Committee, she planned events throughout the city. But living through Sept. 11, 2001, in the capital changed her perspective on life, and she decided to settle close to her family in Santa Ynez, Calif., when she graduated.

After a year planning events for the Bacara Resort and Spa, Chrissy became the director of sales and events at the University Club, where she’s worked for six years. “I love listening to the members tell their stories and share their wisdom and experiences,” she says.

Chrissy believes in leveraging technology, but she never forgets the human element. “God created us for community and to interact with each other,” she says. “Catalyst recognizes God’s desire for how we live out our lives.”