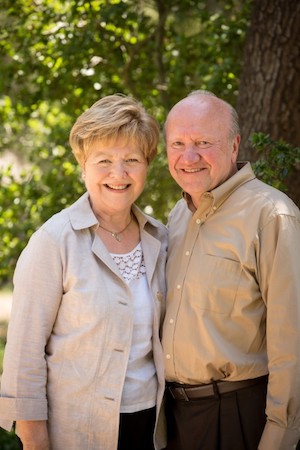 Duane ’63 and Pat Johnson met in 1964 on a Gordon College trip to Europe. They got engaged on a scenic Rotterdam bridge after just a few weeks, and they’ve been married 48 years. They both value Christian education and leadership (Pat graduated from Wheaton), and they share a passion for their work.

After earning a doctorate in psychology at the University of Minnesota, Duane worked in a hospital and directed a clinic for drug addicts. As he met people in the medical profession, he realized they lacked training in managing a business, hiring and retaining staff, keeping medical records and providing customer service. With a friend, he started a business in Georgia in 1975, Practice Productivity, to teach these skills. They sold the successful venture in 1986, and Duane established other businesses. Today he serves as president and chief executive officer of Spinnaker Inc., which includes more than 15 healthcare companies.

“I don’t believe in retirement,” he says. “It’s not in the Bible. I believe in redirection for different stages in life.” He continues to travel and speak to healthcare groups in every state and some foreign countries.

A speaker and consultant for real estate firms and Realtor associations, Pat specializes in ethics and cross-cultural sales. She earned a Master of Science degree at Georgia State University.

Duane attended his 50th reunion in May, marching in Commencement as a Golden Warrior. He says Westmont confirmed his strong Christian commitment, and he values what he learned from his mentor, the late David Hubbard ’53, who taught at Westmont before serving as president of Fuller Theological Seminary.

“People sacrificed to make Westmont happen,” Duane says. “I appreciate the strong commitment to Christian education and the willingness to challenge people’s faith while helping them work through the issues so they come out stronger than ever.”

Duane and Pat, who have two daughters and four grandchildren, have made a provision for Westmont and other Christian organizations in their will. “We believe in investing in Christian leadership,” he says. “Our society is becoming increasingly secular, and we need to encourage young people to stay true to their Christian faith,” Pat says.