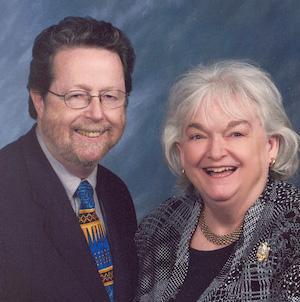 Dennis Perry ’64 earned a doctorate in nuclear chemistry but never worked as a chemist. “Graduate school led me straight to computer science and a 40-year career as an executive in information technology,” he says. His resume includes positions as vice president at numerous technology companies, where he’s developed technical solutions to complex problems such as military and computer security.

Dennis entered the doctoral program at the University of Washington after graduating with a degree in chemistry. “Computers were just starting to make inroads in the sciences,” he says. By working on a large mainframe to control experiments and record data, he became a computer expert before the university had created a computer science department. “Westmont fully prepared me for graduate school,” he says. “But the most exciting thing that happened during college was meeting my wife of 47 years, Linda Jones Perry ’63.”

Dennis completed a two-year postdoc at Brookhaven National Laboratory doing research in nuclear physics. He’s continued this activity, helping discover five new isotopes and publishing 70-80 scholarly papers. But he moved into management early in his career.“I could control more of what was being done than I could do myself,” he says. “It was a way to accomplish what I wanted to do; I just didn’t get to do it myself.

“My liberal arts education helped me see the vast variety of things available to discover,” he says. “Attending a technical school limits you to science; you learn to communicate in a language few people understand. I’m good at interpreting technology to senior managers so they understand its potential for business. I talk to both technicians and executives.”

Dennis spent 15 years at Los Alamos National Laboratory in New Mexico; his last position was group leader for network engineering, responsible for protecting the Department of Energy’s only multi-level secure network. During this time, he earned a Master of Business Administration degree at the University of New Mexico and completed all the courses for a master’s degree in computer science.

Science changes rapidly and scientists constantly learn new skills and reinvent themselves. “I do the equivalent of work for a doctorate every five years,” Dennis says. “I love the constant learning, which allows me to follow my interests wherever they lead.”

Much of his work has been defense-related. The Internet began as a research network for the Department of Defense, and Dennis managed it for two years before directing its transfer to the National Science Foundation, the first step in making it public. Its ubiquity surprises him a little, and he enjoys following his family on Facebook. Dennis now manages projects for a defense contractor that provides comprehensive security for the military, from facilities to computer networks, and he’s completed the arduous process of becoming a certified program manager.

The Perry’s two daughters inherited Dennis’  love for learning; both earned doctorates in computer science. Dennis and Linda have lived in the Washington, D.C., area since 1985 and now reside in Dumfries, Va.

Dennis has no interest in retiring. “I only know one set of people in the Bible who were told to stop working: priests,” he says. “And that was only because they started showing imperfections as they aged. If you don’t use your mind, it quits working. I want to keep learning.”