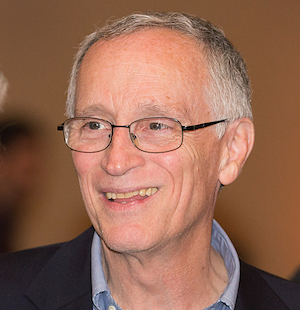 Jay Pierson got his start on Capitol Hill in the journal clerk’s office and is set to retire at the end of this month after 34 years.

Rep. Jack Kingston, a Georgia Republican, said that because of Pierson’s professional guidance, he was able to better navigate his roles as a congressman, husband and father of four.

Rep. Alcee L. Hastings, D-Fla., said he is impressed by Pierson’s speed: “He can get from that cloakroom to this floor or to the speaker’s rostrum faster than anybody I’ve ever seen,” he said Tuesday.

Pierson himself joked that since the House page program was eliminated last year, he has actually served as “the country’s highest-paid chart staffer.”

But he’s more than that to Olson, Kingston, Hastings and the dozens of other lawmakers from both sides of the aisle who gathered on the House floor Tuesday to pay him tribute. Pierson is retiring Dec. 31 after 34 years on Capitol Hill.

They say Pierson, in addition to being a friend, has been a saving grace as the floor assistant for four Republican leaders in all: former House Minority Leader Robert H. Michel of Illinois and Speakers Newt Gingrich of Georgia, J. Dennis Hastert of Illinois and John A. Boehner of Ohio.

From his perch in the back of the House chamber, he’s the in-house parliamentarian for Republicans, advising on all facets of parliamentary procedure, legislative rules and historical precedents.

Pierson’s knowledge, lawmakers and colleagues say, knows no bounds. In the days before C-SPAN, he was C-SPAN, said Rep. Fred Upton, R-Mich., who earlier in his career oversaw congressional affairs at the Office of Management and Budget and relied on Pierson for updates from the House floor.

“Look, I’m from Southern California. I couldn’t have cared less about any of it!” Pierson laughed. “But I learned it. I studied it very hard. I have notes, I have all kinds of stuff underlined, I’ve read the rules manual four, five times. You study that stuff, you take notes, you see it, it comes back a little. Anybody can learn it if they work hard enough.”

He hadn’t anticipated a career made by knowing the minutiae of the House rules. In 1978, he earned a Ph.D. in English Literature from the University of Maryland, and he thought he would go on to teach and coach baseball and basketball.

That same year, however, he got a job on Capitol Hill through his wife, who was working for then-Minority Leader John Rhodes, R-Ariz. Pierson got a gig in the journal clerk’s office and joined the staff of the House Republican Cloakroom before being tapped by Michel to serve as floor assistant.

“I never looked back,” Pierson said. “It’s an exciting place.”

Pierson has seen a lot in his 34 years, from the Republican transition to power in the House for the first time in 40 years in 1994 to changes in the way appropriations bills are covered on the floor. What he’ll miss the most, he said, are the people — not just the lawmakers, but the staffers, too.

The staffers feel the same way. Wallace Simpson, a 26-year-veteran of Chamber Security, said he’ll miss the camaraderie with Pierson. He said he always teased Pierson about his habit of muttering to himself when things got busy.

Laura Reed, one of the House Press Gallery assistant superintendents for the past 10 years, described him as someone who “makes our lives easier.”

“I don’t think I’ve met a nicer person in my time on the Hill,” Republican Rules Committee Communications Director Doug Andres said. “Jay treats everyone, from members to junior staff, with the same kindness and respect.”